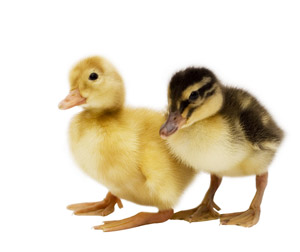 A few weeks ago, my husband and I were driving home from Lowe’s when we spotted a mommy duck in the middle of a six-lane highway. She was blindly leading a gaggle of 9 baby ducks, all of which were waddling cluelessly along behind her as she walked herself and her babies toward impending death by automobile. How she’d made it across the first three lanes I didn’t know, but one thing was certain: she wouldn’t make it past the next 3 lanes unscathed.

Being the animal nuts we are (especially baby animals), we turned around, blocked a lane of traffic with our car (hazard lights on of course), and attempted to rescue them all. First we tried to lead them back the way they’d come (there was less traffic now that we’d blocked one lane), but Mama Duck got scared and flew to the opposite shoulder, leaving her 9 babies behind, them squeaking with terror while she honked furiously at us. 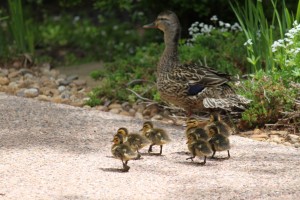 This is what our mommy duck looked like, but with nine babies, and in the middle of a six-lane highway. Obviously she was at the shallow end of the Duck Gene Pool.

The plan had been for me, with my then 28-week pregnant belly, to stay in the car. But when Mom Duck vacated, I jumped out into the median to help my husband scoop up the abandoned babies, which were now running in all directions. Quite adorably, they reached their top speed and suddenly started barrel-rolling on the concrete. I pushed them toward the grass, scooping up two in my left hand, reaching for a third with my right. Duck #2 leapt from my left hand (he didn’t fall far, I was still bent over), so I adjusted my strategy: I held the ducks in my left hand close to my chest, using my right to scoop up ducks and move them to my left hand.

It took some doing, but I soon had five tiny puffs of feathers and beaks cradled between my chest and belly, while Hubby had the other four. He looked both ways, straddle-stepped over a concrete barrier, and ran across 3 empty lanes to return the first four babies to Bad Mom Duck. She wasn’t so smart, so as soon as she saw some of her babes were back, she took off toward the nearby pond.

I stood there behind the barrier, frozen in fear, baby ducks wriggling in my hands. “What do I do?!” I shouted at my husband.

“She can’t count! You’ll have to bring the babies to her!” he replied, checking to see if any cars were coming. He walked out into the middle of the lanes to hold back any cars that did head my way. My husband, the human traffic shield.

I looked up the road as well — not a car in sight. But I couldn’t seem to step over that barrier and into the highway. Something stopped me — some unseen force — and my thoughts immediately went to the little human squirming in my belly. The Force spoke sternly: “OH NO YOU DON’T! DO NOT RUN ACROSS THAT HIGHWAY,” it scolded.

My husband stood in the road, waving me on. “Come on, it’s clear!” he said. And it was.

But still I waited, screwing up the nerve. I looked down at my hands, where 10 little duck eyes were staring at me, beaks opening and closing with frightened squeaks. Babies that needed their mama. I had a job to do, dammit — fear be damned! Keeping my eyes on the still-empty lanes in front of me, I took a deep breath, dashed across as fast as I could, and delivered the five babies to their mom at the pond’s edge.

When I came back to the highway, I waited for an opening in traffic and ran back to our car (which now had a police car parked behind it, holding an officer who was laughing heartily: “Car trouble? Or are you rescuing baby ducks?”).

My heart was pounding, and didn’t slow down for a long time. I couldn’t stop thinking about The Force that tried to stop me from crossing the road, and how strong the warning was.

They say that being pregnant causes changes in your brain, flooding it with hormones that make you a good mother. A protective mother. I didn’t buy it early on, but I do now. They’re not kidding.

These “Mothering Hormones” are not to be messed with. They, like the baby and my food urges, have taken over.

I never had a problem crossing the street before. But now, even when crossing a city street with a crosswalk and WALK signal, I have a momentary stab of fear as the WALK signal lights. Before I start across, I look left, right, left, right, then left again, leery of crazed texting drivers or rogue UPS trucks. I’m protective of my body in a way I’ve never been before. It’s as if I’m already pushing a stroller, bundle of baby inside, checking traffic for her benefit.

It happens when I’m driving (I pissed off many a motorist by driving 45 mph through a rainstorm yesterday, when a year ago I’d been going 65 with the rest of them), passing construction sites (what if that bulldozer slips off that pile of dirt and crushes me to bits? Omg, must go faster!), walking the dog (horrible mental pictures of a distracted driver flying over the curb and onto the bike trail now cause me to walk the dog with a very short leash…poor puppy).

Of the many changes that have happened to me, my body, my brain since becoming pregnant, this is the most frightening and unsettling.

In the same vein, I can’t tolerate certain TV shows anymore. Tosh.0, for one. I just can’t watch a bald idiot smashing his forehead with lightbulbs until blood is spurting out. I made my husband turn off Jackass the other day (and I’d gone with him to see it in the theater, not once covering my eyes while two dudes behind us gagged and left early!). It made me sick to my stomach in a way it never had before. And the coverage of the Jerry Sandusky trial, which bothered me last fall, now makes me nauseated in a completely new and horrible way.

I may not have given birth to my baby yet, but my brain is priming me to be its mommy. And in a strange, unexplainable way, though I haven’t met my little girl (okay, girl OR boy) yet, based on how protective I feel, I can’t help but think I must love her already.