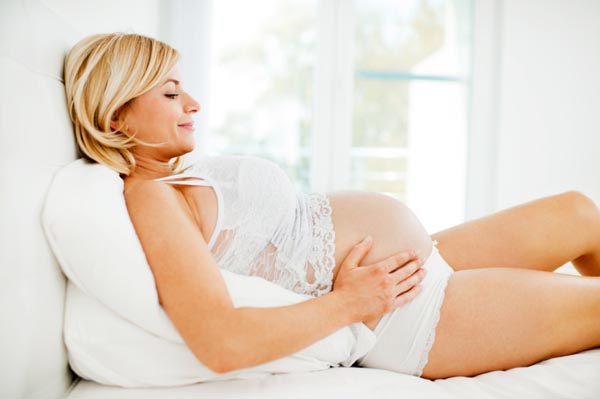 This is not me. I am not that hot, and I don’t wear lacy underpants around the house in the middle of the day. Nor do I have a completely white bedroom. But this is kind of what I look like when I stare obsessively at my belly for 20 minutes straight.

Quickening: the ages-old term for the moment you first feel the baby move inside you.

It’s a neat word — it implies a rushing forth of time and substance, and gives a mental picture of something that was marching forward suddenly charging into a sprint for the finish.

They predict quickening for first-time mothers around 18 to 22 weeks. My “quickening” happened at 21 weeks. I was lying in bed on a Sunday morning the first time I knew beyond a shadow of a doubt that I had just felt something inside me moving of its own free will. It didn’t feel like fairy wings, or butterflies, as some had told me to expect. It felt like something was behind my belly button, testing the walls of its confines, looking for a way out.

Just a few short days later, I could feel her all the time. And now, at 25 weeks, I have learned her sleep/wake patterns and can sense if a loud noise has startled her based on the way she kicks and wriggles.

For me, there was a second stage of quickening that was even more awesome — when her kicks got so strong I could feel them — and see them — outside my skin. That happened around 23 weeks.

Now that she’s figured out this little trick, watching her acrobatics is my new obsession. I’ll be sitting at my desk around 2pm, one of her most active periods each day. I’ll pull up my shirt and watch my tank-top-covered stomach move. I can feel her weight shift inside me, and that’s always a signal of a strong kick or punch soon to come. The entire belly wiggles, twitches, and pulses, shifting side to side, trembling occasionally. I feel it on the inside and see it on the outside simultaneously.

I can’t stop doing it — I watch her while I’m sitting at my desk, I watch her after breakfast, and I watch her when I’m supposed to be paying attention in meetings. I love watching her acrobatics before bed, particularly when my husband is away at work for the weekend and I’m lying in our giant bed alone. I try to record it with my phone, but it’s lost in the translation to zeroes and ones, and the little jerks and shivers are too hard to decipher next to the rise and fall of my stomach when I breathe.

Some nights I fall asleep with my arms wrapped around my belly, feeling her little jiggles and snaps under my hands and wrists. I feel less alone, somehow, knowing she’s in there, awake just like me.  (Just like last night, when my heartburn kept me up until 3am and baby stayed up with me. Maybe she was apologizing, knowing she was the cause of it?)

Every evening, just before her nighttime gymnastics routine, I get into bed and read, as I have done for years. Every so often, she punches my stomach where the book is lying, as if making a literary statement. It makes the book jump up into the air an inch or two, and never fails to make me laugh. So far, I have determined that baby hates John Irving, and loves the Family Handyman magazine.

This is, by far, the absolute coolest, most fascinating part of being pregnant. Hands down. No contest. It’s amazing.

And now I must wrap this up and go. I’ve got belly-watching to do.