Keeping your maiden name after marriage

I didn’t take my husband’s last name when we got married.

I don’t regret it, even after five long, years of marriage (they’ve felt long, but I know five years really isn’t an eternity).

It wasn’t a tough decision for me. I wanted to keep my maiden name. Why? Because as one of four girls, growing up in a small rural Iowa town, I was called by my surname a LOT. ‘You must be a ____ girl!’ and ‘Oh, you’ve got to be one of those ______ sisters!’ My last name was, and still is, a huge part of my identity. It’s also a unique, strong, and positive name that is easy to spell and toward the front of the alphabet. Almost the holy grail of names.

Before my wedding, I was pretty sure I would keep my maiden name. While mulling it over, I let others’ opinions get to me, and I started to feel really unsure. I realized I would regret it if I took his name solely to please everyone else. It was my name. My decision. And nobody had a right to comment.

The reasons they said I shouldn’t do it

I got plenty of advice on the matter though. After five years and two kids I have experienced just about every “what if…” situation that folks tried to scare me with back then—examples below—but I’m still totally happy with my decision.

For any women who really want to keep your name, stay strong. I’ll help you build a case against the naysayers by refuting each of their common protests. Starting with…

Wouldn’t it be neat if there were a widely recognized symbol that you could display at all times to signify your marital status? You could, I dunno, wear it on your body, in a really visible place, and it could be shiny and sparkly to draw attention to itself, and maybe your spouse could wear something similar? That way, when you’re 9 months pregnant and balancing a toddler on your hip, you don’t look like white trash. (Well, you might still look like trash, but at least your kids won’t appear illegitimate. :-))

#2 – People will think your children aren’t yours.

This is a tough one, because I frequently take children I’m not related to out in public to wrangle them while pretending they are mine. Don’t you?

If you see me in public, chances are my kids are thrashing around on the floor at my feet or drooling in my hair. One of them even kinda looks like me. More likely than not, I’m wearing no makeup and have one boob hanging out at Target.

Trust me. People know I’m their mother. No one else but a mom would subject herself to such a struggle.

Further, when I’m in the checkout line trying to keep Peanut’s hands off the M&Ms and remove my hair from Squeak’s extraordinarily strong grip, no one is asking my kids for a government-issued ID. It is at those moments when, if someone really thinks my kids aren’t mine, I will gladly let them take over parenting.

Even when we are at places that ask for names – the doctor’s office is a good example – it’s simply not an issue. They ask my child’s name and if they need mine, they ask separately. Few people automatically assume we share a last name. Maybe the assumption is more prevalent in rural areas. Not in my city.

(Also – Peanut has my last name as her middle name. Squeak doesn’t, because I lost that battle with my husband. But at least 50% of my kids have my name in there somewhere.)

#3 – They won’t let you pick up your kids from school/daycare because you have different last names.

When I was selecting the daycare center where my kids go, I was given a tour. When our kids start going there, I filled out forms with emergency contacts, provided extra clothes and instructions, and was given an access card plus a login for the check-in/checkout system. Trust me. They know who I am. I’m Peanut’s mom, and Squeak’s mom. They don’t particularly care what my last name is.

#4 – People will call you by the wrong name, or call your husband by YOUR last name (the horror!).

Have you ever had someone mispronounce your name? Do you correct them nicely? Me too. Particularly if they mispronounce my last name by saying another word completely. It’s fun and easy!

When someone calls my husband “Mr. [insert-my-last-name-here],” I laugh hysterically. It’s mostly telemarketers.

#5 – Your husband will feel rejected and super disrespected.

If I had married a man who measured his masculinity by my choices, yes, that would be an accurate statement. Luckily, I did not. My husband did not care one whit.

#6 – It will make things complicated and inconvenient.

OK, sometimes it is a bit of an annoyance. Our Christmas card can’t read “From the Crawfords*” or “From the Bright* Family.” It has to say “From the Bright-Crawfords” which, when you plug in our actual names, is pretentious as hell.

Know how I get around that? It reads: “From Lydia, Nathan, Peanut, and Squeak.” Do you send Christmas cards to people who don’t know your last name? Me neither.

Other times include the oh-so-common occasion of monogramming our Land’s End purchases or when carving your last name onto a giant rock in your front yard. (Maybe that’s just an Iowa thing?)

(A quick search on Google Images reveals that yes, it is an Iowa thing.) 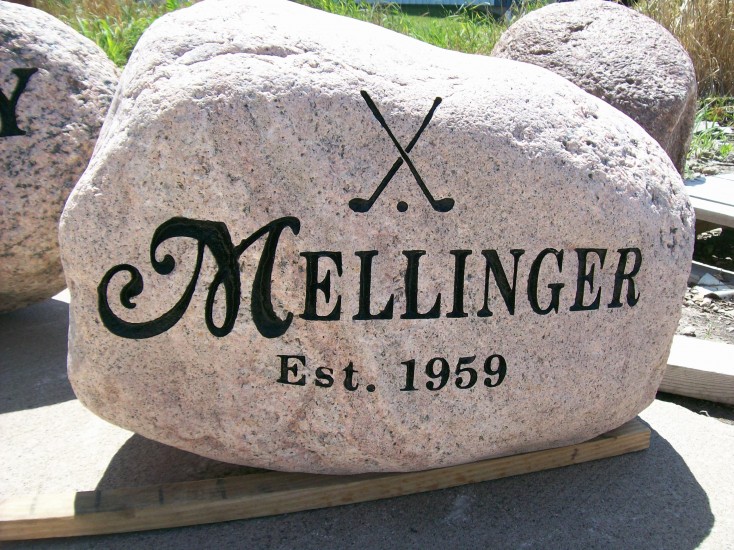 Photo from MolineMonument.com. JOIN THE COOL KIDS CLUB. Call them to get your own front yard rock now!

The rock was an easy one. I put my husband’s last name on it. Because three people in this house have his last name. I am the only one with mine. The dog is hyphenated (poor thing). I’m outnumbered. (Although last weekend we had a playdate with one of Peanut’s friends from daycare, and I had set it up via email. They pulled in the driveway and balked at the name on the rock. Then they remembered it matched the name on Peanut’s cubby. For four whole seconds or so, they were utterly beside themselves.)

I can think of one occasion where it caused an inconvenience. When returning to the U.S. from Ecuador, we had to go to the customs counter separately because our last names were different. He went first. I went second. Easy peasy.

Perhaps. But they only get it wrong once. Then they figure it out.

Except for my Grandma. Every time she mails me something, it’s addressed differently. Sometimes I have his last name. Sometimes mine. Sometimes they’re hyphenated, and the order is a crapshoot. She’s the only person who truly does not get it. I have explained it many times: “Just send the letter to me, and use the same last name I have always had.”

She responds, exasperated: “But how will the mailman know where to deliver it?”

#8 – People will think you aren’t committed to your marriage.

I know a few sketchy women who, despite taking their husband’s last name, are still ginormous whores who are the furthest thing from committed. Maybe I appear to be a cold-hearted bitch from the outside, but honestly, if you don’t know me well enough to realize that’s stupid, then I don’t care what you think anyway. A stranger’s assessment of my love for my husband is irrelevant.

Really? There are entire continents where the practice of taking your husband’s name is totally absent, and they still have ‘unified’ families. Where do people come up with this stuff?

In short, Undecided Ladies, the horror stories they tell you really don’t come to pass.

I am saying that you should make your own decision based on what you want – not the fear of what other people may think.

If your husband doesn’t care, and you want to keep the name you’ve always loved, then keep it.

Because you can always change your mind and fill out a form later.

*I made up these fake names for demonstration purposes, of course.