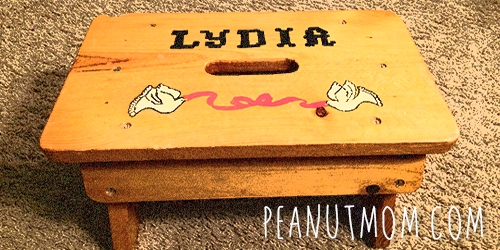 I was 11 years old when my grandmother’s heart stopped in front of me. We were a few feet apart, mid-conversation, and she had a heart attack.

It was 23 years ago, but something like that never leaves you.

Grandma was 4 foot 11. Understandably, her nickname was ‘Shorty,’ which she took no offense to (even referring to herself by the handle). She spoiled her grandkids, and we loved staying at her house. The smell of fresh-baked monkey bread greeted us at every visit, and her kitchen was always stocked with pop and Fruit Roll-ups just for us. I hate to admit it, but I definitely had a favorite grandma.

As a child, she had rheumatic fever. It’s a complication of strep A and can strike after strep throat or scarlet fever. It damaged her heart irreparably, and she suffered from a weak heart her entire adult life. Grandma’s first heart attack was at age 73, her second at 79. It was this final heart attack I witnessed.

That night, my father, with my younger sister and me in tow, stopped by his parents’—our grandparents’—house, unannounced for a surprise visit. As we walked in the door, Grandma greeted us with relief.

“I’m so glad you’re here. I’m having chest pains,” she confessed. My father asked how long she’d been feeling bad, and as they talked, I watched her swallow several nitroglycerine pills from the tiny vial around her neck. It was decided we’d head to the hospital, so I went with Grandma to her room to pack an overnight bag. She pointed me to the right drawers, and I filled her suitcase with underthings and necessities.

We were leaving the bathroom after packing toiletries, me trailing after her, when Grandma suddenly stopped and turned to me. She wrapped her arms around me, hugging me tightly, her chin on my shoulder.

“I’m so glad you’re the one here with me,” she whispered.

She pulled back and looked up at me; I could see tears welling up in her eyes. She was afraid. I remember thinking, When did I get taller than Grandma?

Dad, Grandma, and I arrived at the hospital 45 minutes later—little sis stayed with Grandpa—and they settled Grandma into an ER bed, sensors on her chest. The heart monitor soon began to draw a slow, spiky pattern on the screen.

“They always said I had a pretty heart rhythm,” she laughed, noting the pattern.

I agreed. It was beautiful and unlike any heart rhythm I’d ever seen, on TV or in real life.

An hour passed. My father was off filling out paperwork, and Grandma and I were talking. I stood at the foot of her hospital bed, feeling heavy with exhaustion. It was nearing 10pm and I wondered when we were going to go home. A nurse came to Grandma’s side to check her vitals, and as she worked, a man in an EMT uniform entered through a side door.

“Honey, I’m done for the night,” he said to the nurse, and I realized she was his wife. “Do you want me to pick up anything on my way home?”

As he walked over to get his instructions, Grandma smiled at me. In an instant, her expression changed and her hand fluttered to her chest.

Grandma’s eyes darted toward the ceiling.

“Oh,” she exhaled, sounding surprised. “Something hit me hard.”

I tried to catch her eye, but she was still looking at the ceiling, hands to her breast. A loud whine began to blare from the monitor at her bedside. I looked at the screen. The spiky, beautiful heart rhythm was gone. In its place was a flat green line.

Everything happened quickly. The EMT turned to the monitor, then toward Grandma. She wasn’t talking anymore. He made his right hand into a fist and reared back. I watched in horror as he delivered a blow to her chest that would have put a grown man flat on his back. He rolled her onto her side, blocking my view of her face, as vomit splashed onto the floor.

A second later, invisible hands steered me out of the room. I remember being led through the double doors and into the hallway, while a computerized voice repeated the words “CODE BLUE, CODE BLUE” through the speakers overhead. Three kind nurses surrounded me, patting my hair and kneeling to squeeze my shoulders. One closed my hand around a Dixie cup of Sprite and coaxed me to take a drink. I saw my father hurry past me into the ER, his face stony, a group of doctors and nurses close behind. I couldn’t see through my tears and my little body was shaking with sobs.

The code announcement was silenced a minute later, and the chaos calmed. I sat on a stiff chair with one nurse still by my side, waiting for Dad. He came out looking stunned, the EMT following him, looking downtrodden.

“They got her back. She’s not conscious, but her heart’s beating,” Dad told me. I was relieved but still terrified, my head full of the scene I had just witnessed.

The EMT had come out to apologize. He explained to Dad that I had watched him hit Grandma. “Sometimes that can bring them out of arrest right away,” he said. “It isn’t pretty, but it does work. Just not this time.”

They wheeled Grandma into the Intensive Care Unit an hour later, stabilized for the time being, but still unconscious. I fell asleep in the waiting room as Dad talked with her doctors.

We arrived home well past 2:00 a.m.; the house was dark and silent. I collapsed into bed. The next day my parents let me sleep in and skip a few hours of school. By that afternoon Grandma had regained consciousness, but was very weak.

The second day she was awake and talking, and the third day her doctors began to talk about plans for her to return home. They would need a stress test to see what she was capable of doing. Would she be able to stay at home with Grandpa? We were all scared that things would never be the same again.

The next morning at school, I walked with my friends down the sixth grade hallway and stashed my backpack in my locker. As I closed the locker door, I heard my name: “Lydia…”

It was my mother, and her voice was strained.

I turned and saw her, dressed in her normal teacher clothes, but something was wrong. Her eyes were bloodshot, tears streaming down her cheeks. Her mouth was tight as she tried to keep her composure.

“They’ve called in the family,” she said gently. “Go get your coat.”

We were at the hospital until the end. A few times between 9am and 1pm, the grandkids were able to see her. I leaned over the bed and kissed her cheek, listening to her ragged breathing.

I told her I loved her. She squeezed my hand.

Grandma had contracted pneumonia, and her lungs were filling with fluid. The kids weren’t invited back to the room after 1pm. Her death was neither comfortable nor pretty. My mother, aunt, uncle, and oldest cousins stayed with her, comforting her as she begged for it to end.

Grandma’s funeral was five days later, on my 12th birthday. In typical plan-ahead style, she had already bought my present. It was under the bed in the guest room, wrapped and labeled with my name. 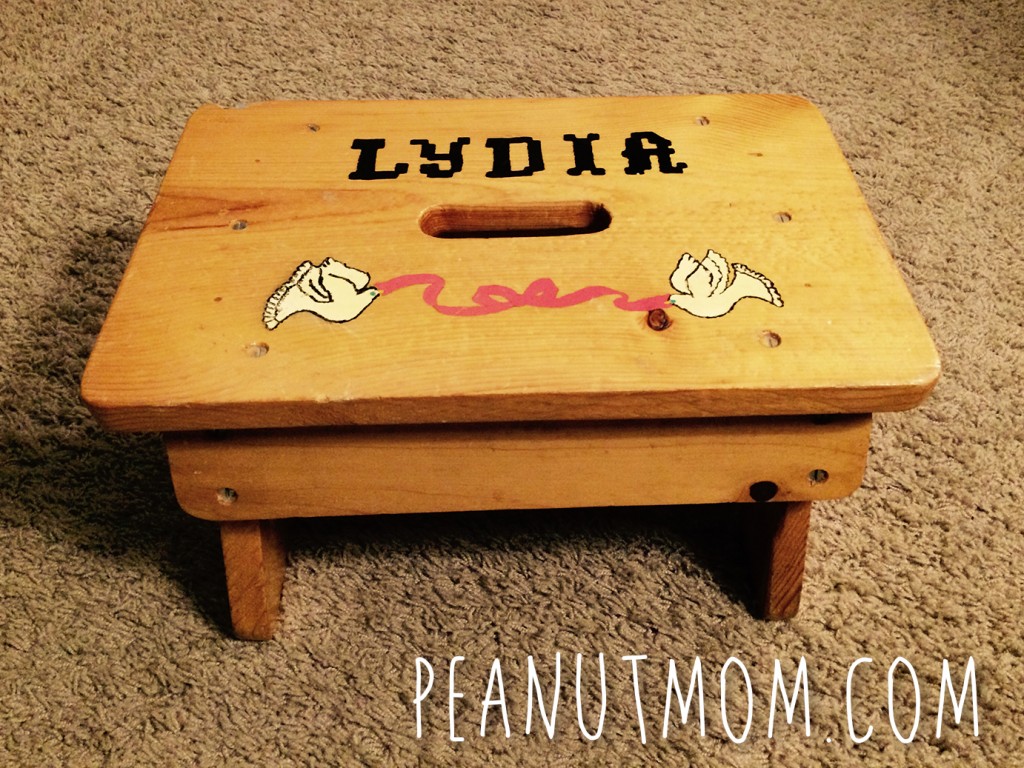 It was a handmade step stool, crafted by an Amish woodworker, which she had carefully painted and sealed herself. Written on the underside, in her careful arthritic scrawl, were the words: “For Lydia. From Gma and Gpa. March 1992.”

I’ve never been without the stepstool since. I took it with me to college; it came with me to my first home, and my second.

Today, my daughter Peanut stands tippy-toe on it, using the stool to reach the sink as she washes her hands.

I watch my child place her tiny feet on that stepstool, and I think of Grandma. I picture her leaning over it with her work light and tiny paintbrushes, carefully painting letters, doves, and two little horses onto it so many years ago. I wonder if she had any idea how far that little stool would go… that it would one day support my beautiful Peanut, who carries it around the house to aid in her mischief.

Grandma never got to see me become an adult, meet my husband, or become a mother. Poetically, her final gift to me did.

I hope it continues to watch us for many decades to come.

P.S. — The loss of my grandmother has been on my mind lately because Peanut carries the stepstool everywhere. I hope you can forgive me for the non-parenting and non-infertility-related content. 🙂

P.P.S. — When Peanut was a baby, my father-in-law and I spent a weekend making her a stepstool like mine. On the top, in the same faux-crochet font, I painted her name. There are two owls on the sides, and a little owl on top under the handle. Thirty years from now, I hope she loves it as much as I love mine.