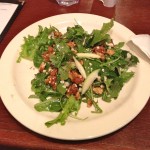 When my sisters and I misbehaved as children, my mother doled out an unusual — probably ill-chosen — punishment. She’d discipline us with food. Specifically, steamed broccoli and cauliflower. If we walked into the house and smelled steamed broccoli, we’d turn to each other and ask, “Oh, shit. What does she know?”

(To this day I cannot stand the smell of cooked broccoli — it makes me want to barf, and then hide under my bed.)

So it comes as no surprise that I grew up refusing to eat vegetables, with only a few exceptions (corn and potatoes of course — come on, this is the midwest!). The most hated of the veggies for me were the green leafy ones. I felt that lettuce tasted like an unpleasant experience — running through the grass, tripping and getting an accidental mouth full of grass. I hated the taste and would revolt if a single sprout or shred of lettuce made it onto my sandwich. 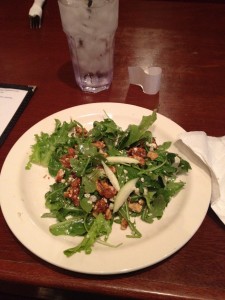 Fast-forward to current day. I’ve tried to be an adult and add a few more veggies to my short list of permissible legumes. I’ve started eating sweet potatoes and tomatoes (okay they are actually a fruit, but I wasn’t eating them before and I am now, so they count).

In short, I’ve had an aversion to leafy greens for over 3 decades. So you can imagine my shock when, back in early May, I suddenly wanted a ginormous salad.

I was at lunch with friends, and as the waiters set plates in front of us, I found myself staring dumbly at my friend Casey’s green salad, with one unmistakable urge consuming my entire brain: I WANT THAT.

It was so ludicrous, I dismissed the thought immediately. There was no mistake: I hated leafy green foods. So there could be no feasible way that I was actually craving a salad.

But a few days later, the urge hadn’t abated. In fact, it had gotten worse. I ignored it for weeks, until this past Sunday when I went to dinner with my friend Lindy. I perused the menu and kept coming back to the description for the arugula salad. I had years ago tried arugula, realized it didn’t have that “grassy” taste that iceberg or romaine lettuce did, but I didn’t like it. Not enough to actually order it. Ew, gross. 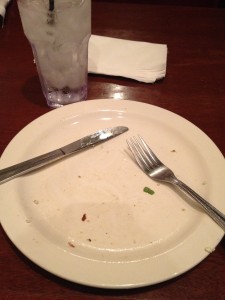 But this day was different. I decided to give in to the urge. I bit the bullet and ordered the arugula, which came with vinaigrette, green apples, walnuts, and bleu cheese crumbles. And I ate the entire friggin’ thing, because it was that damn good.

Two days later, at dinner with my husband, I wolfed down a spinach salad with strawberries, bleu cheese, and bacon bits (I like bleu cheese). Holy shit it was tasty. Now I’m hatching a plan to return to both places, so I can eat more salads.

What the hell has come over me?! THE BABY has come over me, that’s what. As my pregnancy books told me, I must accept that I am no longer in control of my appetite. When Baby wants something, she puts in a request, and I have little choice but to comply. I suppose this is a harbinger of things to come. Apparently she wants iron, potassium, Vitamin K, or folate… or one of the other hundreds of benefits of leafy greens. She isn’t even out yet and she makes smarter diet choices than her mother.

The moral of the story: Baby is calling the shots. I’m pretty proud of this particular call, though. Baby’s urge for greens makes me feel like a grown-up.

Baby’s control over my world has begun with green vegetables, but who knows where it ends?