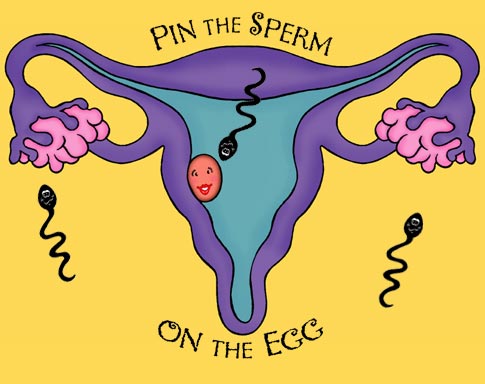 I have a confession.

I hate — hate, hate, hate — showers. Of all kinds. It’s not limited to baby showers. I throw wedding showers into that same miserable bucket.

While there are occasional showers that break the oh-god-please-kill-me-now mold, most of them are unoriginal and boring as all get-out. So unless I really really like the person it’s being thrown for, I usually avoid showers like the plague. 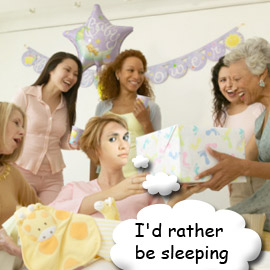 It all started in 1989. I was in fourth grade, and competitive as hell. My mother threw a baby shower for someone at our house, and I was thrilled to sit in the room in my own big-girl chair and participate like everyone else. When the first baby shower game began, a baby-themed word search, I smiled. I WAS THE MASTER OF WORD SEARCH! I had this thing in the bag, yo.

True to form, I dominated the game and finished first. The co-host presented me with a set of little white baby booties. I was pretty sure they wouldn’t fit on my hooves, but hey, a prize is a prize, and I wasn’t complaining. I was busily reveling in my victory, stroking the soft booties, when I noticed the room had gone silent. I glanced up to see Mom looking at me expectantly.

“Go on. Give them to her.” She nodded toward the pregnant chick. It slowly dawned on me that my prize was not actually for me. I reluctantly stood, walked over to the mom-to-be, and begrudgingly handed over my booties.

Returning to my chair, I crossed my arms and sulked. What the hell was this crap? What kind of shitty game gives a prize to the winner and then makes them give it away to someone who didn’t win?

And in an instant, my hatred of shower games — and by association, showers — began.

(Side note: I hadn’t even been introduced to the world’s most abhorrent Baby Shower Game — the candy-bar-microwaved-in-a-diaper guessing game, where you sniff and examine what appears to be a diaper full of shit. Seriously, ladies, have we no dignity?)

For my bridal shower three years ago, my bridesmaids planned it with one thing in mind: everything we did had to be FUN. There was no circle of chairs in a stuffy living room while I unwrapped spatulas and oven mitts, holding them up for oohs and ahs. We went to a park, had a picnic in the shelter, then divided the gifts across the “putting greens” on a Frisbee golf course. We all took shots at the pin for a spell, then we’d blow a whistle and everyone would scurry over as I opened a couple of gifts. Then we’d go back to golfing. There were prizes for the players (prizes they got to keep!) and the booze was plentiful.

(Least useful wedding shower gift: Taking Charge of Your Fertility. A nice thought, but in the end, completely unhelpful. I sold it on eBay instead.)

Last weekend, two of these same bridesmaids came by for Baby Shower brainstorming. We decided on brunch, for which I requested bubble bread and fruit and V8 Fusion (yummy!). We nixed the cake because they usually suck. And we came up with a few ideas for — gasp! — baby shower games. All had to pass the awesomeness test first.

Our selections were Baby-themed Pictionary (with fun-size candy bars as prizes), and Mom-and-Dad Trivia (where I get to see who actually knows everything about me and who pretends, bwa-ha-ha-haaa!). There was a third one, I can’t think of what it was, but trust me, it was something I would actually want to play, which is saying a lot.

My favorite part:  what we decided to give as prizes for trivia. I had the bright idea to make the prizes me-themed (yes that sounds vain, but hear me out). A little backstory: in my house, the tools belong to me, not my husband. For Christmas last year, one of my favorite gifts was a new titanium-coated Dewalt drill bit set. When I’m bored, I look up carpentry projects on HomeDepot.com and make something. I can install a ceiling fan and rewire an outlet. I can saw the bottom off a door and I get really happy when I go to Lowe’s. In short, I’m a handy gal.

So for prizes, instead of spatulas and oven mitts, I suggested tools. Little ones, like box cutters, tape measures, laser levels, stud finders (for my single friends), picture hangers, or wall anchors. Inexpensive but oh-so necessary. Boo-yah. Shower awesomeness rating:  10 out of 10.

Regardless of how fun the shower prizes are, I still feel a little guilty inviting people to my shower. It feels like I’m asking them to buy me crap. And I hate feeling like a damn panhandler. But there’s a lot of stuff we need (mostly little stuff; I’ve managed to borrow and garage-sale tons of big stuff like a Pack ‘n Play, Exersaucer, bouncy seat, bassinet, and so on…). My friends tell me not to feel bad — this is what baby showers are for.

But we’re not naive. Fun games and awesome prizes aside, my shower will still be slightly painful for some. Which is why we’re serving mimosas. Yippee, booze on a Sunday morning!