She’s at the end of her rope 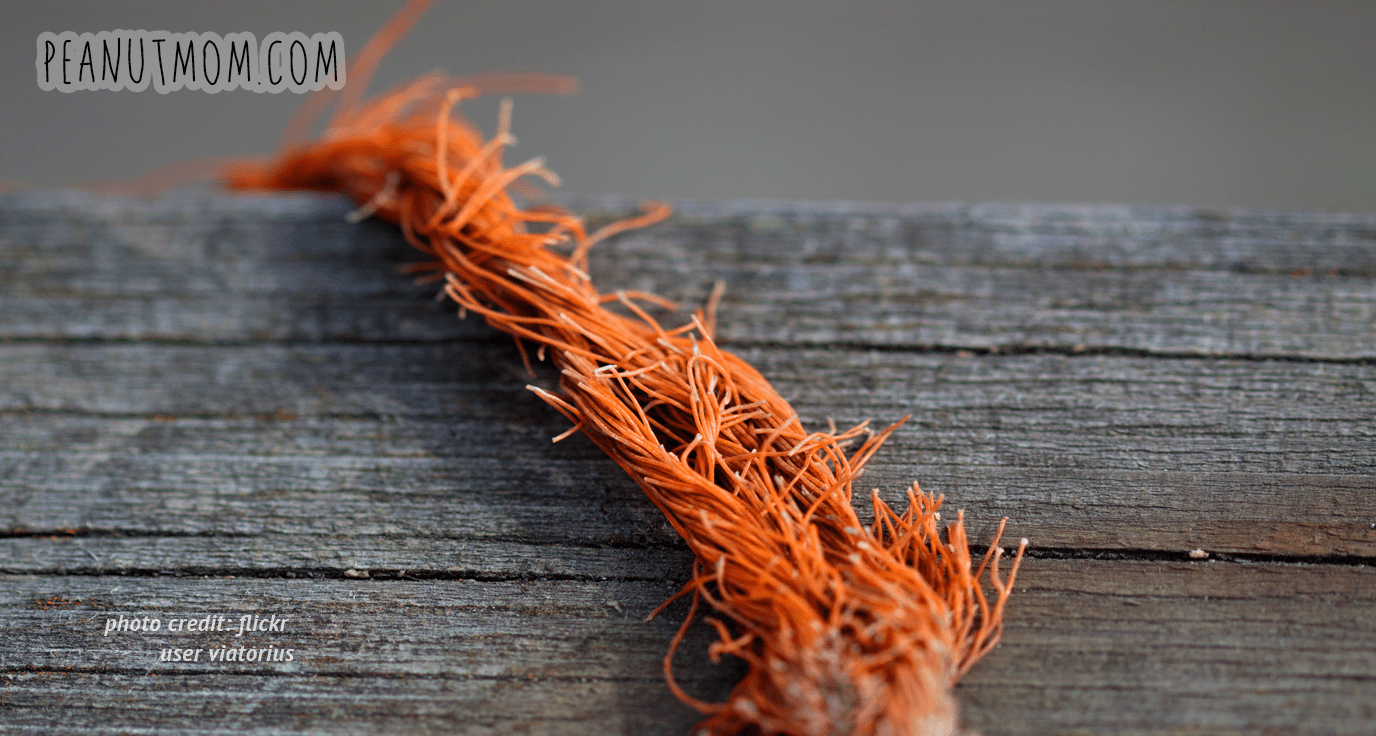 I just rediscovered something I wrote over eight months ago but never published. Squeak would have been a smidgen over 4 months old, and Peanut was 2-1/2. I was just returning to work full time after two months of part time.

Suffice to say I was having a moment. A moment where I just wanted to throw in the towel on this trying job of being responsible for keeping two small humans alive. It was a dark day.

I never posted what I wrote. Reading back, I wonder why I didn’t share it. I think I was embarrassed to say these negative things about parenting out loud. I felt ungrateful. But you know what? I’m a firm believer that moms should show each other our vulnerabilities. We should share our joy and our heartbreak, no matter how ugly it may appear. So I’m going to post it today. Maybe someone else is at the end of their rope, and needs a little bit of empathy.

So here it is. Spoiler alert: it got better. It always does. 🙂

Let me preface this by saying that I adore my kids, and I love being their Mommy. But today, I’m having a moment and I need to vent.

Nothing that is great comes without its downsides, right? That’s the reality of parenting. Yet there are parents who pretend nothing is ever bad, that they’ve got everything completely under control all the time (or maybe that’s just the face they put out to the world). If they truly believe that, they’re probably lying to themselves and everyone else, too.

I’m repeating myself, but this job is hard.

I wake up on Monday morning at 6am. But let’s not kid ourselves; I’ve been awake twice since midnight to nurse Squeak prior to my alarm. I spent half an hour the night before preparing: packing a gluten-free lunch which is a huge pain in my ass (more on that later); setting out my clothes and ridding my shirt choice of hanger nipples; packing my pumping supplies; filling my water bottles; and that’s after I get both kiddos into bed around 8pm.

But back to Monday morning. I rush to get ready and out of the house, I rush to get to the office on time. I work to squeeze three separate pumping sessions into my day, which despite having time blocked on my calendar, things inevitably get scheduled over my pumping blocks. (Sometimes Squeak will wake and eat at 5am, so instead of needing to pump at 9am-12pm-3pm, I need to pump at 8-11-2. My entire schedule can be thrown off by Squeaker having an off night.)

I do not have a job with a lot of downtime, so it’s pretty much work-work-work all day, with the exception of a half-hour lunch break, where I eat whatever I brought from home at a table just outside my office. I rush out the door at 4:30pm (I take a half-hour lunch), trying like hell not to forget my keys, my phone, and my pumped milk. (Twice in the last week I got to my car and realized I’d forgotten something. All this night waking makes my memory complete shit.)

Then I either hustle home to feed Squeak (he usually drinks the last of his milk around 3pm so he’s ready to eat when I get home) or hustle to the daycare to pick up kiddos. On days the kids are home with my husband, I relieve him so he can go to the gym for a quick workout. Then I do my best to get through the next few hours.

When the kids are finally in bed, I do my prep for the next day, and every minute I’m awake, I feel guilty. Because I know I should be sleeping too, banking sleep for the interrupted night ahead.

After the rush-rush-rush of the workweek, I am spent. On Friday night, all I want to do is veg out with the TV on, and I feel so guilty for it, but I cannot bring myself to get up.

I feel guilty when I don’t want to do a goddamned thing on Saturday or Sunday. I feel guilty that I’m not doing crafts or Elf on the Shelf or taking Peanut to the Children’s Museum. I feel guilty that I don’t do my physical therapy exercises every day (it’s like 10 minutes, to treat a tendon I tore the first volleyball game I played after Squeak was born…but dammit if it isn’t one more thing).

I feel guilty that I don’t have the slightest interest in exercising or working out. I feel guilty that I’m actually happy to be unable to play volleyball due to injury right now, because the thought of a weeknight activity makes me want to curl up in a ball and cry. Sometimes I tell people I’m busy when I’m not, because I’d rather just be at home with my baby, and I feel guilty for that too.

The ironic part is that I would probably be happier if I were out of the house, but I feel guilty for not spending what little free time I have with my kids.

(Like right now. I’m writing when I should be sleeping, at 9:54pm on a Saturday night. This is the life, kids.)

I know this feeling… It feels like life with Peanut in the first year. Did it get better? Or did I get better at handling the stress? In the weeks since I started back to work, I’ve had digestive issues. Most days within an hour of lunch, I’m having stomach pains, bloating, and major discomfort. It lasts until I eat dinner. And it comes back the very next day. I finally went to the doctor, who did an ultrasound and based on the results, asked me to go gluten free for two weeks. I’m 8 days into the diet, and the stomach pains are no better.

My new hypothesis of the cause: stress. Is this my body’s way of telling me that something’s gotta give?

To top off all this guilt, I feel guilty complaining about my life “out loud.” Shouldn’t I be so grateful to be a parent that none of this matters? Wasn’t I just 3 short years ago a bitter infertile who’d have given anything to be in my shoes? Shouldn’t I be able to “lean in” to the stress, to accept my life as it is now, and cope?

Perhaps I will get there. I’m not there today.

Today, I just need to vent a little.

I’m done now. I feel better. Sometimes you just need permission to bitch for a while to other parents, who can relate to the hell you’re living.

Now, I’ll go to bed. I’ll get under the covers and try not to think about the fact I’ll be up in a few hours to nurse. I’ll flip through the pictures I took on my phone today. Squeak’s fuzzy baby-chick hair. Peanut spinning around the living room in only a diaper, dancing to Christmas commercials. And I’ll remember them today, the moments not captured in my Photo Stream. I’ll recall Peanut giving me a kiss, a hug, and a kitty pat before bed. Peanut asking me to hold her hand this morning, and then giving me a completely spontaneous kiss. Squeak’s sweet grin when he’s all full of milk and looks up at me and smiles so big that he loses his latch, then turns away shyly. I am covered, smothered, and positively soaking in love, and bursting with it for my babies.

This is hard. But despite the stress, the strain of the day to day… it is worth it.  So very worth it.

Sometimes I just need to vent all the hard parts in order to bring myself back around to appreciating the good.