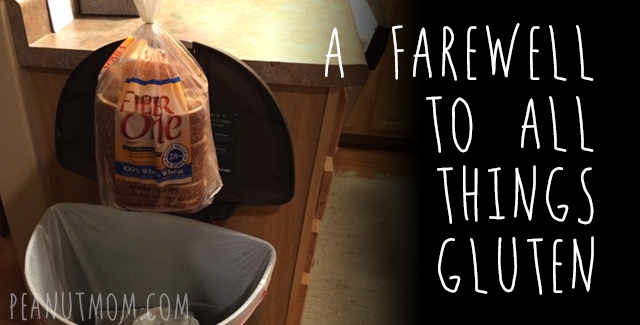 Warning: The content of this blog may be offensive to those who think talking about poo is inappropriate. Any discussion of digestive disorders pretty much requires poop talk, and that’s the topic here today. You’ve been warned. On we go.

Most women who’ve given birth (vaginally or C-section) can attest to this: it throws your body off kilter.

Certain body systems go completely off the rails. Obviously your reproductive system is screwy. (It’s startling how much you bleed post-partum… I apologized to the hospital’s housekeeping team many times for the bathroom, which looked like a murder had occurred and a blind person tried to clean up the scene.)

Your digestive system also takes a hiatus from normal operation. This is complicated by the fact that most women have stitches down south, so the idea of pooping is enough to induce major terror.

We Moms are sent home from the hospital with a human and an armload of Senekot and Colace. The goal is to make the poo like soft serve ice cream, so you don’t undo the doctor’s handiwork, so to speak. Then, thanks to the hormone bath we’re swimming in post-partum, many new moms find that their digestive system comes to a complete standstill. Combine constipation with stitches in your va-jay-nus (okay, perineum), and that’s where the terror comes from.

Even if you succeed with the ice cream consistency, the first poo after a vaginal birth is tentative to say the least. You’re asking muscles that typically charge ahead like a linebacker to instead tiptoe like ballerinas. Slow, slow, just a tiny bit of pushing – wait! Stop! Okay, now slowly again… There are usually tears and Kleenex.

After Peanut, when I was recovering from a third-degree tear – and I apologize for the TMI – it took a while for my pelvic floor muscles to regain their former glory. I definitely had a few “air poops” (Peanut’s term) that snuck out when I laughed or sneezed. Eventually, things returned to normal. Then I had another baby and the scary poo and muscle recovery started all over again.

Because I had already experienced post-partum poo havoc, I wasn’t surprised with something similar happened after Squeak’s birth. I knew it would resolve eventually. Recovering from a first-degree tear was a walk in the park compared to a third-degree, so the muscles in question were back in shape quickly. Despite the bounce-back, my digestive system continued to be on strike. It moved exactly nothing, unless you count air. And a lot of it.

After a month, I wasn’t too worried. Two months passed, and still things weren’t right. Then three. Around then, I was back to work part-time, and began having really severe stomach pains every afternoon, starting around 2pm and lasting until supper. They were accompanied by bloating and a very obvious food baby. I could feel big pockets of air moving through my intestines.

One day near the end of month four, I started having sharp pains in my lower left side. They felt exactly like an ovarian cyst I had years earlier, so I called my OB/Gyn, who wanted to check it via ultrasound.

(Bonus: I got to see Tara again, my favorite ultrasound tech from iVF! It was so fun to show her pictures of my babies where they didn’t look like fish or tyrannosaurus rexes.)

The ultrasound revealed two very quiet ovaries, but a massively distended colon. My OB and I met afterward. We discussed my symptoms, when they were worst, and what I was eating.

“What did you eat yesterday?” she asked me.

“A big bowl of cereal for breakfast. Pasta salad for lunch. And pancakes for dinner,” I responded.

She gave me a look. “Is that a pretty typical day for you, food-wise?”

I thought for a moment. “The pancakes aren’t, but I have a big bowl of cereal every morning, and I make a lot of pasta salads and take them to work for lunch.” I paused and did some counting in my head. “Come to think of it, the worst days of stomach pain this week were days I had pasta for lunch.”

The doc cringed a little as she delivered her next statement. “I think you may have developed an intolerance for gluten.”

My stomach dropped. Well, it didn’t really, but it would have, if there weren’t 10 pounds of poo and air keeping it afloat.

We talked more and her best-guess diagnosis honestly fit pretty well. She said gluten sensitivity can pop up after your body goes through a major event, like giving birth, and she has seen this in a lot of patients in their 30s and 40s (herself included – she had developed an intolerance after her fourth baby).

She asked me to go on a two-week trial diet. No gluten. And we’d see what happened.

I moped for several days as I realized everything I’d have to give up. My favorite cereals (Life, Cheerios, Cinnamon Toast Crunch). Cupcakes. Cookies. Cinnamon rolls. Bubble bread. Brownies. Pancakes. French toast. My grandma’s rolls.

Then a few rays of sunshine broke through the clouds. Did you know all but one of the Chex cereals are gluten free? (Only wheat Chex isn’t.) My favorite granola, Pumpkin Flax Granola, has no gluten-containing ingredients (though it is made in a facility that also processes wheat, but that shouldn’t be a problem).

Better yet, it’s 2015. Everything is being made gluten free now! There is gluten-free pasta in nearly every grocery store now, and GF bread can be easily found, too (though the slices are incredibly tiny, and the loaves are small unless you buy it at Costco, and they cost about a billion dollars each…ugh!). Every grocery store sells a flour blend (sans wheat) that can replace regular flour cup-for-cup in most recipes. Restaurants label their GF items, many offer GF subsitutions, and you can even get GF pizza!

My point: after a short time, I realized going gluten free wasn’t the grim experience I thought it would be.

Ten days into the diet, I had a normal poo for the first time in months (sorry again for the TMI). Things started moving again and the toots almost completely disappeared.

But I was still having the stomach pains every afternoon at work. What was going on?

Embarrassingly, I solved that mystery by week three. I take a 30-minute lunch every day, and that means I scarf down my food like a prison inmate while I pump at my desk. One day at a work potluck, a coworker remarked on my scarfing speed. I realized I had just eaten all of my food in the time everyone else had taken about four bites. A lightbulb went off. I was eating too fast.

So I slowed down, and started doing Jumble puzzles while I ate. It forced me to take breaks between bites. Afternoon tummy pain = gone. I felt like a dumbass, but I was happy to have it fixed!

Four weeks into my GF diet, I fell off the wagon for a day. I had a bagel sandwich for breakfast, a GF lunch, and two pieces of pizza with two breadsticks for supper. An hour later I could hear my guts protesting. I felt the effects of those two meals for three straight days. I won’t get into gory details. It was clear that my body did not appreciate my lack of willpower, and it let me know in a really awful way.

Changing how you eat isn’t easy, particularly not for me. I’m already a really picky eater. Removing gluten made my already-short list even shorter. I don’t cook big family meals (Peanut inherited my picky eating habits, my husband is a vegetarian who doesn’t like to eat big dinners), so if I am making a main dish, it needs to be fast, simple, and good when reheated. I’m building up a list of good main dish options that I can reference when I am contemplating a meal. For now, I find myself eating a lot of omelettes because they’re easy and don’t require much planning or many ingredients.

I struggle in a few areas. I used to grab a granola bar when I needed an on-the-go snack, but I’m going for bananas and raisins now (they’re healthier anyway). Did you know Doritos are gluten-free? So are Fritos, most potato chips, and lots more of those not-as-good-for-you snacks. Just like with main dishes, I’m working on building up a nice long snack list that doesn’t involve fried crap.

So what now? I need to get a proper diagnosis, so my OB referred me to the digestive disorders clinic here in town. The clinic will check me for celiac disease, which I don’t think I have, but I would like to know for sure (it’s an easy blood test).

Until then, I am keeping a food diary and testing small amounts of gluten in different dishes (example: macaroni and cheese with GF noodles, but with a bit of flour in the cheese sauce) to see how I’ll react. So far nothing has made me super sick except for the pizza/breadsticks gluten bomb. I cheat a teeny bit (I totally had a small glazed donut last Friday), but for the most part, I am getting very little gluten and some days none.

When you’re dieting and you encounter food you shouldn’t eat, it’s hard to say no. Your inner voice badgers you: “It’s just a wittle piece of banana bread! Come on, what’s the harm? This one piece can’t possibly derail your entire diet, right?” Those extra calories make you feel guilty, but they won’t send you sprinting for the toilet the next day.

Yes, I could eat that banana bread. I would love to eat an entire slice, warm from the oven and slathered in butter. But I’ll pay the price.

The thought of squirt poops takes the allure out of anything.

P.S. – My husband is annoying in that he thinks gluten sensitivity is imaginary. He also tells me that I should “man up” and get over my allergies (which include penicillin, sulfa, and acetaminophen… two of the three cause my airway to swell shut). So I knew I was in for a world of teasing when I was ‘diagnosed’ with gluten sensitivity. He’s gotten hit and pinched many, many times in the last month for making mean GF comments. But we’ve made progress. He now says that people who are going gluten free to lose weight or be trendy are the dumb ones. After walking past the bathroom and hearing the fallout (literally, ha ha) of the pizza/breadsticks debacle, I think he gets it now.