The Pregnancy Duel: Peanut vs. Squeak 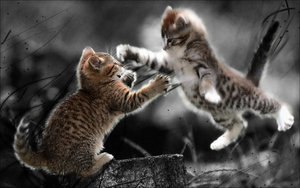 They say no two pregnancies are the same. (Who is ‘they’? Facebook? HuffPost Parents? Does anyone know?)  So how has this go-round been different — or the same — from last time I did this “carting-around-a-tiny-parasite” deal? I shall tell you. But first — a peek at the two kiddos’ ultrasounds! What do you think? Looking similar? Did we get the wrong embryo? Hmmm.. time will tell. 🙂

Turn in those sad little post-nursing bras, the pregnancy boobs are coming out to play! I’m kind of psyched to welcome them back for at least a year and 9 months. Wahoo!

I bawled 9 times during the Super Bowl (no, not because of the game… it was the commercials that did it). A few weeks ago, I went to my nephew’s swim meet, and when a parent nearby started cheering for his daughter at top volume, I started crying. Just like last time, something about sports competition brings out the bawl baby in pregnant me.

4. My husband doesn’t give a crap

Every night before bed, I put my hand on my tummy and feel Squeak doing his nightly acrobatics. I pull my husband’s hand to my belly, saying “Honey! Feel this!” He rolls his eyes and placates me for about 15 seconds, then says “I felt it, can I finish reading now?”  Maybe he loves Squeak in his own way already, but he won’t give a crap until Squeak comes out. It’s the same routine as last time.

I started suffering from heartburn around week 23 with Peanut. True to the tale, she came out with a full head of hair. The heartburn didn’t start with pain though. It starts with random burping. I’ll be in the middle of a story, and BLURP! It just jumps right in there like a self-centered girlfriend with no social sense. Embarrassing. I’m okay with the burps… because I know the painful part of heartburn is coming next. *sob*

In my last pregnancy, I felt Peanut move when I was 21 weeks along. This time, I felt Squeak’s first stirrings at 13 WEEKS! The first few weeks, I would maybe feel one twinge a day. But since week 16, I’ve been feeling him daily. As of week 18, my husband could lay a hand on my belly and feel him from the outside. People always say you feel Baby #2 sooner, but 7 weeks sooner was a surprise. (Turns out there’s a good reason — my 20-week ultrasound revealed that my placenta is on the back wall of my uterus. This is why I feel every little kick and punch he makes!)

I had less severe nausea this time, but it lasted several weeks longer.

Last time, I noticed them at week five. It took another five weeks for my husband to notice my porn-star boobs. This time, absolutely nothing happened in the boob department until week 14. Then magically, the milk-makers showed up with a vengeance. Pretty sure I went from an A-cup to a C-cup in about 6 days. I think they’re still growing too. I keep finding the damn things in my armpits.

As soon as the nausea ended, I suddenly got REALLY HUNGRY. When folks ask how I feel now, I quote Point Break. There’s a scene in Point Break where Gary Busey makes Utah buy him two meatball sandwiches, even though it’s only 10:30 in the morning. When the roadkill-like sandwiches arrive, he unwraps one, saying “I’m so hungry I could eat the ass end out of a dead rhino.” I had two sandwiches for dinner last night. And I ate them both and IT WAS EVERYTHING I THOUGHT IT COULD BE.

Starting this pregnancy 14 pounds lighter was kind of a pain in the ass. It meant that most of my maternity pants didn’t fit. It’s already hard to keep pants with a giant elastic waist up where they’re supposed to be. When they are too big to begin with, it’s even harder. Grrrr.  I refuse to buy more maternity clothes when I don’t plan to have another baby after Squeak.

Just like last time, I went off my depression medication when I got pregnant. This time around, I’ve been struggling to keep my mood up. I have some guesses as to why. Last time I was so elated to be pregnant that it was hard to find anything to be sad about. This time, I’m again happy as hell, but it’s a different feeling from the first pregnancy. A little more subdued. I’m more tired this time, and getting a lot of good sleep is key to keeping depression at bay. Hard to do when Peanut is so demanding of my energy and my time. I see my therapist regularly, and I do what I can to stay happy. But I can’t wait for this godforsaken winter to end; to get outside, to go on long walks every afternoon… some exercise will help and it’s hard to do when I’m on Peanut duty. Soon we’ll be able to get some exercise together. I can’t wait.

As my Squeak pregnancy continues, we’ll see if things change. Maybe they won’t, and this is an early indication that I’m in for another nearly painless labor! Could I be that lucky twice?