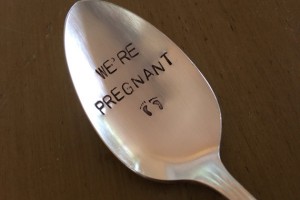 My sister called me this week after reading my Cart Before the Horse blog. In it, I had already started fantasizing about revealing our pregnancy (despite being a month away from even being pregnant at that point) to our family. My sis was there for my big reveal, and wondered how it measured up to my daydreams. She thought I should write a blog about it, too. Great idea, sis!

So here’s my Baby Reveal Recap:

We did our first reveal really early — just five days after our positive pregnancy test, in early December. But due to timing, we weren’t going to see my in-laws again for two months, and didn’t want them to find out significantly later than my family, so early reveal it was. We hadn’t created our reveal video yet (see below), so we took an ultrasound from the Embryo Transfer and enlarged it, and I photoshopped in an arrow and some text. 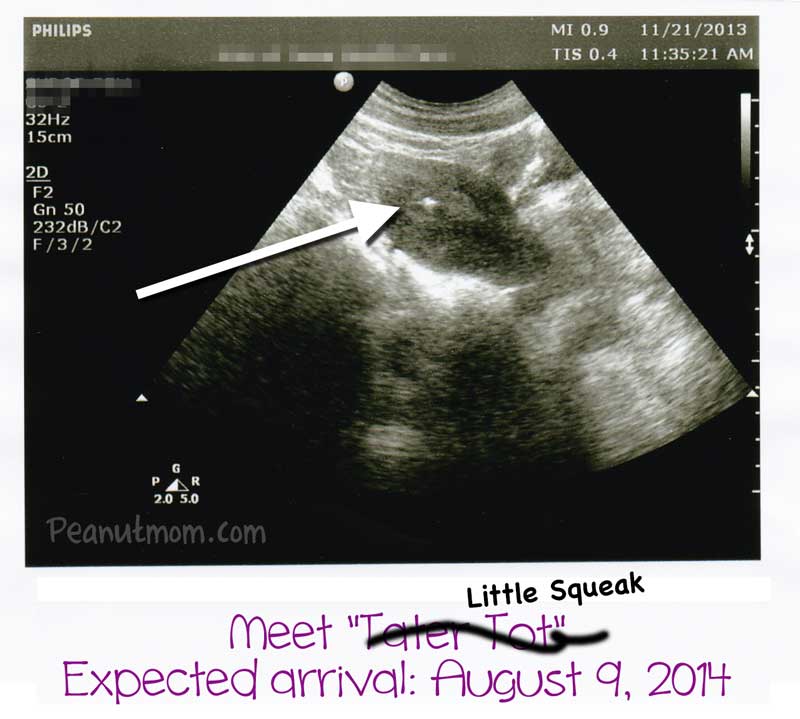 (We started with the embryo’s nickname as Tater Tot, but later changed it to Squeak, hence the corrected photo.)

We wrapped up the photo in a big envelope, so she’d have to pull the paper out before she could read it. At first, I thought she was onto us. When she saw the envelope, she pointed to Peanut and said, “Is it something as cute as her?”

My heart skipped a beat. How did she know it was another baby? Was I giving inadvertent clues?

I wish I could show you the video, but I’d have to blur the faces, and then you’d miss the best part. The look on my mother-in-law’s face when it dawned on her what she was looking at… that look was awesome. Her jaw hit the floor and she said, in her upper-midwest-but-not-quite-Fargo accent, “Oh my God! Oh my GOD!”

My father-in-law, her husband, was more subdued… he had a grin from ear to ear, and just said, “Oh wow. You kept it a secret!” He’s not a squealer though, so his reaction was pretty much on point with his style.

I don’t know what I expected out of Big Reveal #1. But I’d say it was a good one nonetheless. It went off pretty much the way I wanted it to, and they both were very surprised.

We decided to reveal to my family on Christmas Eve, when everyone would be together in one place (which happens very rarely, given that my parents are divorced and one sibling lives on the east coast). We had the reveal video all set and had burned it to a DVD, ready to show it on the big TV after presents were opened. Since they’d see through me in a second if I said “I have something to show you,” we decided to tell them it was a video we were submitting to a Beautiful Baby modeling competition for Peanut. They seemed to buy it.

But when we loaded up the DVD, it wouldn’t display correctly on the screen. No matter how many times we adjusted the aspect ratio, some of the video wasn’t visible. I was pissed, but we couldn’t make too big of a deal of it, or the family would know that this “modeling video” was something much more important. My husband told me it was fine, and we pressed PLAY.

As the video started, I sat on the floor where I could watch everyone’s reactions, and read the words on the screen as each title appeared. My mother, true to form, provided commentary*, saying inane things through the entire thing:

“Uncle Ron used to stick his tongue out like that all the time!”

“Oh, she loved that walker, didn’t she?”

I stopped reading the titles halfway through. I knew the word ‘sibling’ would be visible on screen, and I didn’t need to read the last line. My mom read it for me.

“Sibling?! WHAT?!” she said incredulously. And loudly.

My sisters didn’t need to ask. They understood and immediately started cheering and clapping. I was still sulking about the stupid TV ruining my reveal.

“Your stupid TV sucks!” I shouted. (Not my finest moment. But I was nearly in tears. My big reveal hadn’t gone off the way I wanted and I was upset. Plus, pregnant girls aren’t really known for being the best at controlling their emotions. Especially me.)

Nobody cried (except me, because of the dumb TV), but I appreciated the clapping and hollering. Maybe the reveal for grandkid #6 was never going to be as awesome as the reveal for grandbaby #1 or #2. I wish there’d been a teensy bit more emotion… maybe a little more shock and surprise. But then again, perhaps I wasn’t doing as good a job of hiding it as I thought!

We have video of that reveal too, and I love watching it. My mother’s face, happily oblivious about what she’s seeing, with a big gasp and jaw-drop at the end. Good stuff. And halfway through, my five-year-old niece tries to balance on a toy vacuum cleaner, and fails spectacularly. One second she’s standing next to the sofa, and then she just face plants. Her mother looks at her to make sure she’s not hurt, then goes back to watching the video. It’s hilarious.

Reveal #3: The Other In-Laws

We don’t see my father-in-law often, but he and his significant other, Dinah, made the trip to see us (okay, to see Peanut) in early January. We wrapped up the video in a DVD case and labeled it “Peanut’s Year in Review” and gave it to them as a Christmas gift, suggesting they watch it right away.

My father-in-law is nothing if not stoic, while his girlfriend is anything but. She squealed, clapped, and gasped when the video ended, and hopped off the couch to hug me (ironically, hers was the greatest show of emotion from all 3 reveals, and in keeping with her personality; Dinah is a delightful person who’s always upbeat and sunny).

My FIL sat still, looking at the television, eyes narrowed. “I like to consider myself a fairly intuitive person, but I didn’t even consider this, because my son always said he wasn’t having more than one child. I didn’t think it was a possibility. I had no idea.” He was a little stunned, and it seemed a little pissed that he hadn’t guessed it earlier.

Overall, it was fun to surprise people. Especially those who will get to call Little Squeak family. Was it worth all the work and effort we went through, keeping our IVF cycle a secret? I think so.

This will be my last pregnancy. I’ve had a big reveal now (three of them, actually!), and it was a lot of fun. Aside from still thinking my mom’s TV sucks, I’ve no regrets.