Peanut went in on the 9th (two days ago) for her fourth official photo shoot.  The big milestone at this point, according to Dr. Pancake, is the heartbeat. Peanut’s needed to be over 100bpm.  This time my husband was with me, but all the same, I was nervous.

I’ve heard stories of women going in for a scan at this point and finding no heartbeat; the first sign of an impending miscarriage. But I knew it was important to keep the negative thoughts at bay, since stress isn’t  good for Mother or Baby.

Didn’t care. I was freaking out. All week leading up to the ultrasound, the morning of, on the drive to the hospital, while we waited, and as I disrobed and wrapped the Big White Sheet around my waist, and finally as I scooted sock-footed to the ultrasound table.

Tara was my tech again (yay!). She started the ultrasound and we immediately saw the black circle swimming in the white fuzziness, with a little donut inside, but this time, there was something extra. An oblong blob floated just above the donut. 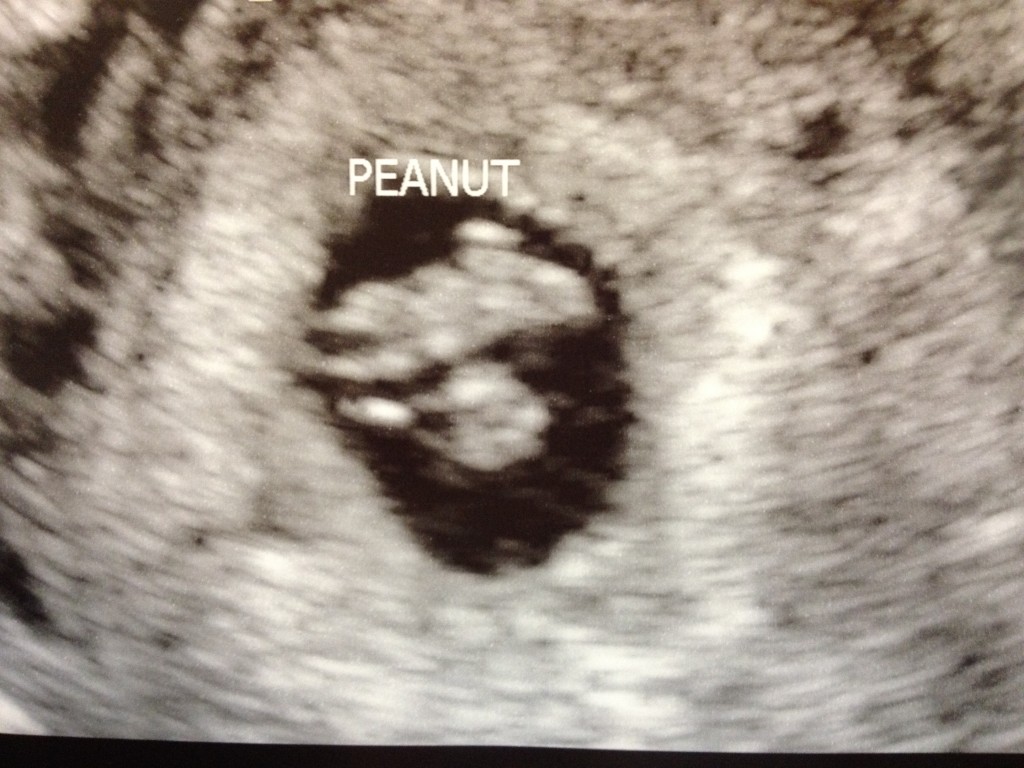 She’s the horizontal blob at the top of the black circle. The sticky-up thing at the right is likely a leg bud. Her head is to the left, and she’s facing up. Crazy girl.

Yes, I bawled again. And my husband laughed at me (dick). He always does that, which is why I try never to cry in front of him. He claims to think my crying is cute, but I beg to differ, since his first reaction to my tears is always laughter (and we all love feeling ridiculed, right?). But I digress.

As Tara zoomed in on the blob, suddenly I saw it:  two little circles near the blob’s middle, side by side, squeezing  rhythmically. The heart. It was a crazy sight, to see these little pumping heart chambers inside something so tiny.

Tara took a break from poking around and took a quick measurement. A moment later, the number popped up: 126 bpm.

Peanut had done it again. Little Miss Not-to-Be-Low-Beta was not only still in there and growing, her little heart was beating.

She measured right on track — 7 weeks, 1 day. And I was exactly 7 weeks and 1 day pregnant, which was great, considering she was behind by 2 days at the last ultrasound. Peanut caught up quick.  And in the meantime went from invisible on an ultrasound to a very visible little blob! Good girl.

But I’ve got 5 weeks left until I’m “out of the woods,” so to speak. And even then there’s always a chance of miscarriage. So now we wait, and I count the days, worrying and hoping everything is going to be okay while simultaneously being as positive as I can so as not to manifest a horrible outcome.

It’s a delicate balance: the line between going crazy with worry about what might happen, or trying to shrug off the anxiety to tell yourself everything will be okay.  Do you worry like crazy and risk affecting the baby with added stress… and when everything turns out fine, you’re pleasantly surprised?  Or do you ignore the what-ifs and look only on the bright side, bathing your embryo in a tub of sunny optimism, only to be later devastated if something bad happens?

I don’t know the right answer. I’m hovering somewhere between the two, probably closer to sunny optimism than doom-and-gloom. But every so often, the worry overtakes me and I start to freak out a little.

My husband thinks my worrying is silly and useless. Maybe I know too much about pregnancy, and my head is full of numbers. His is blissfully empty (of pretty much everything, tee hee). I wish he could listen to me fret and be understanding. But for now, he pats me on the head and tells me not to worry. He’s always been like that. When I’m a whirling tornado of human freak-out, he’s the one relaxing calmly on the couch, playing Bejeweled while my world falls apart.

Maybe between the two of us — me worrying, him not letting the bad thoughts enter his mind — we’ll balance out the negativity in our house.  And maybe I’ll get lucky and Peanut will emerge just as laid-back as her dad.