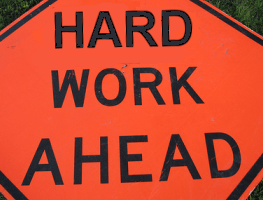 Ever since attempting to become pregnant, parents have been warning me about it. But now that we’ve managed to put a little bun in the oven and start cooking, it’s gotten worse.

For example, if I mention being tired, I hear:

“Sleep while you can! You won’t get any sleep in a few months.”

“Ha — wait until you’ve got a newborn waking you up every two hours. You ain’t seen nothing yet!”

But I’m a little confused. If parenting is such a wonderful experience, why does everyone keep telling me how much it’s going to suck? Are you trying to scare me? Shouldn’t you be talking it up, so I won’t be completely terrified (like I already am)?

And when I say I’m terrified, I mean it. I am scared to death. I have probably changed a total of 10 diapers in my lifetime. I’ve never bathed a baby. I can’t smell a dirty diaper or tell a wet diaper from a dry one by pinching it. I don’t know the difference between hungry crying and tired fussing. I don’t know how many hours babies sleep, or how much they eat, or how to tell if they are sick.

The point: I have no F-ing clue what I’m doing, and in 8 months, a tiny, helpless human will be relying solely on me (and my goofball husband) for survival. Holy mother of god.

Back in junior high, a girlfriend of mine told me having your period was awesome. This girl loved having something I didn’t, and talked about Aunt Flow like it was an amazing vacation from the horror of being period-less the other 21 days of the month. “I don’t think it’s the slightest bit of inconvenience. It’s kind of nice,” she’d say. The other girls, some of whom had gotten their periods six years earlier, would gape at her, shocked.

One girl, Jayne, spoke up: “Are you kidding me? It’s not fun. My period is the biggest pain in the butt. I’d do anything to make it go away.”

Little Miss I-Have-It-And-You-Don’t would reply that it really was no problem.  But as soon as I got mine, she joined the others in the anti-period chorus, whining non-stop. “Ohhhh, my gawwwwwwd, I have my fucking period, and it fucking SUCKS!”

She talked it up like it was sunshine and puppy dogs until I joined her club. I think parenting is the same way. Now that parenthood is inevitable, everyone’s reminding me that I’m in for major misery.

Here’s the deal, parents:  the warnings are really not necessary.  I already know it’s going to be hard, and I’m petrified.

I babysat my nephew when he was five weeks old, and he woke me up at 5am and cried every time I put him down for 10 hours straight. He didn’t sleep through the night for two years. And as he got older, I was squeezed in a bed with him a few times due to lack of space at Grandma’s. He kicked me in the face, repeatedly (how children manage to find your face with their feet — no matter how you situate them in the bed — is a miracle I’ll never understand).

Yes, he wasn’t my kid, but I was able to get a tiny sense of what I was in for. Despite that, I decided to do it anyway.

I’m not looking forward to the hard parts of this parenting thing. It’s going to suck, a lot at times, and that’s what scares me. But I know there will be some happy moments that will make it all seem worthwhile.

So here’s where you can help, parents: if you could focus on the nice parts — the sunshine and puppy dogs as opposed to the poop and vomit — I’d feel a lot less terrified about the Peanut in my belly. I’ll get to the hard part soon enough. For now, let’s just pretend it’s really no inconvenience at all. In fact, having an infant is kind of nice.  Right?