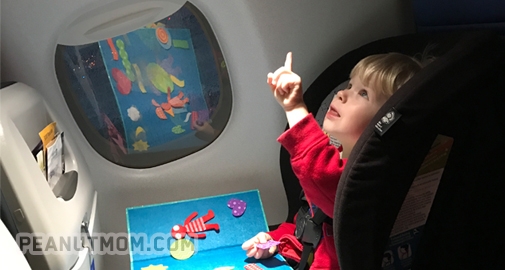 Air travel with toddlers is not fun.

It seems instinctive, then, to eliminate anything that could cause stress while traveling. Like carry-on roller bags—just spring for the fee… your hands are needed elsewhere.

Another stressor: taking a car seat on the plane. Technically, you’re not required to do anything special for a kid that’s over age two. They’re allowed to sit in the regular airplane seat with a typical seatbelt.

But as this blog explained, there’s nothing safe about an improperly restrained child on an airplane. Our laws and regulations are majorly lacking when it comes to child safety and airplanes.

Okay, so lap child = bad. What should you do then?

Are they under 22 pounds? Use a car seat. More on that below.

Are they between 22 and 44 pounds, less than 40″ tall, and able to sit upright without assistance? You have the option to use a CARES Harness. Click here to jump down to the CARES section.

Squeak is about 25 pounds, but he’s a small kid, and I felt he’d do better in a car seat—the familiar setup would help him realize that an airplane isn’t someplace you can get up and run around.

Peanut, on the other hand, is 35 pounds and tall as hell. She is a perfect candidate for the CARES Harness.

Is a car seat REALLY necessary?

Just like in your car at home, you should use a car seat on an airplane.

I know, I know… there’s nothing stress-free about lugging a full-size car seat onto an airplane full of people who are probably already pissed that there are kids on the plane, period. (Their problem, not yours. If you even think about doing something like this to make up for your child, I will cry.)

If you read my blog about lap babies, you already know that taking a car seat on the plane is all about safety. We secure our babies with five-point harnesses in the car, and our max speed in the car is about 80 mph. Why would we skip a car seat in a vehicle that reaches speeds of 150 to 180 mph while still on the runway? Air speed is a whole ‘nother ballgame: upwards of 550 mph. Whoa.

So I won’t spend time discussing why a lap belt alone is insufficient; for the same reasons you wouldn’t secure a 30-pound toddler with just a lap belt in your car, you shouldn’t do it on a plane, either.

What kind of car seat do I need?

The lightest one possible. If you’re carrying it around the airport, you’ll want to avoid the heavy metal-frame car seats, like Britax. If you’re like me, these tough-as-nails car seats might be all you own, and that’s okay. It’s pretty affordable to get a lightweight–yet safe–car seat just for your trip.

The consensus among jet-setting moms seems to be the Cosco Scenera. It’s ideal for airplanes and super popular for air travel. They’re light and also affordable if one of your existing seats isn’t a good option. The Scenera is less than $50. I found one for just $39 on Jet.com. 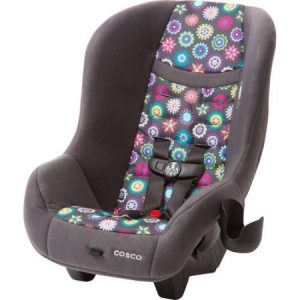 The Cosco Scenera comes in a bunch of different colors and prints. I think this one is pretty groovy.

Get a car seat caddy. Trust me.

I was lucky enough to borrow a car seat caddy from a friend for my trip. We used the Go-Go BabyZ Mini, and it was a godsend.

The GoGo Babyz Mini retails for less than $60 on Amazon.

Here’s why:  (1) It made the car seat pull double-duty as a stroller, and (2) it created hours of car-seat-pushing fun for the kids.

When we first arrived at the airport, I was going slightly crazy trying to check in our bags while Nathan parked the car, with both kids running all over like insane people (shocking for 5:30 am). So I sat Squeak in his car seat and buckled him in. Ha! You’re stuck, buddy.

(He hated it. But he calmed down after a minute or two.) 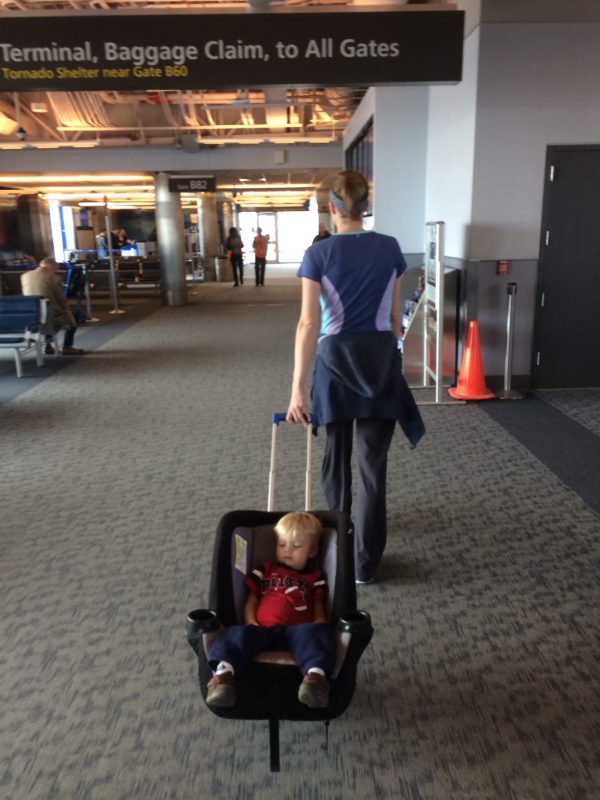 And I did it all by myself, too. Here’s how we got ‘er done: I wheeled Squeak down the jetbridge all the way to the plane in the stroller/slash/car seat. Then I’d scoop up everything–him, the seat, and the caddy–and lift it over the seats as we walked down the aisle. When we got to our assigned spot, I’d set the bundle down on the seat, turned toward the window. I’d unhook the caddy, then thread the seatbelt through the car seat’s belt path. Sometimes I could do the threading with Squeak just leaning forward; alternatively, I could plop him in the middle seat while I got the car seat buckled in.

Luckily Squeak weighs less than 30 pounds, so I could do all of this on my own. Carrying a bigger kid inside the seat might not work, but he could have easily walked down the aisle in front of me. This was just easier.

After his seat was secured, I placed the GoGo Babyz Mini in the overhead bin and boo-yah, we were seated, buckled, and ready to go… and Daddy wasn’t even done putting the CARES Harness on the seat yet! We felt pretty cool, I gotta tell ya.

The hours of car-seat-pushing fun was a pretty big perk. It kept both kids occupied during layovers, especially Squeak, who loves to push anything. 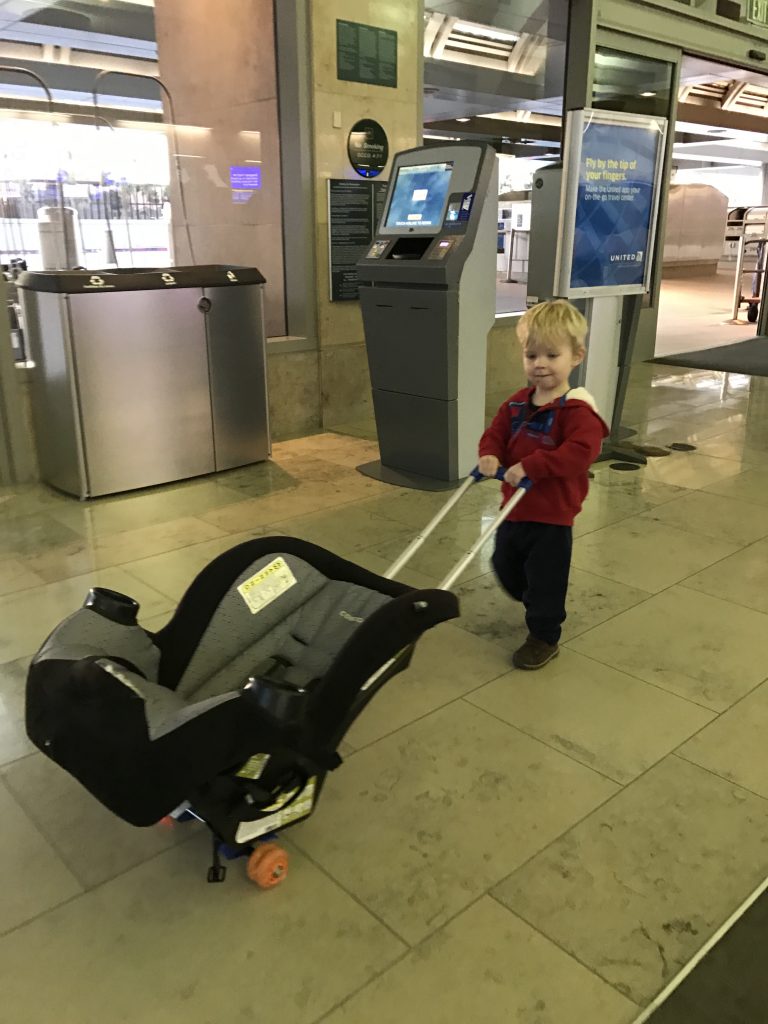 Since he could walk, Squeak has been a fan of pushing EVERYTHING. Dump trucks, cars, shopping carts… he’s two-and-a-half now, and still, it’s push-push-push all the time. I’m worried we’ve created a future drug pusher or bulldozer operator. (Hoping for the latter.)

My kid’s the perfect size for a CARES Harness. Give me the lowdown.

Wonderful! This is definitely the easier option since a CARES Harness is much smaller and compact. Using one involves a tiny bit more finagling once you get to your seat on the plane, but not much. If my husband can figure it out, anyone can make it work. 😉

The CARES slips over the seat back and connects with the regular seatbelt to turn an airplane seat into a four-point harness. It’s significantly safer than a lap belt alone. It comes with idiot-proof instructions and adjusts easily. Srsly, it’s awesome. 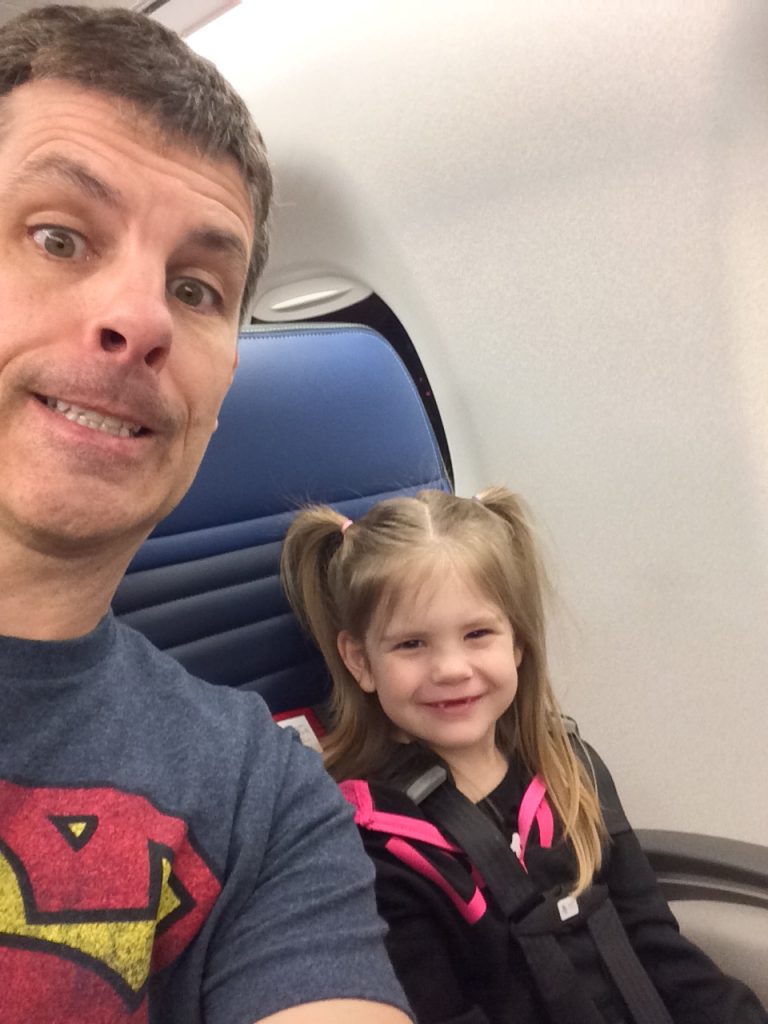 Peanut rocking her CARES Harness. She was a rockstar traveler.

How do I get a CARES harness?

Here’s some bad news: CARES Harnesses cost just over $75, and if you’re just an occasional traveler, that’s a steep price for only a couple of uses. BUT WAIT!

Good news: You can rent a CARES Harness! How awesome is that?

For just $12.95, too, which is pretty damn reasonable. I rented mine from RentCares.com. You enter your vacation dates when you reserve your harness; they send it a week in advance of your departure. After you return home, you’ve got a week or so to return the harness (you can use the same envelope you received it in), and you only need to pay the postage to ship it back.

Helluva lot cheaper than buying your own, amirite? How cool is that?!

Tell me again why I should go to all this hassle?

Contrary to when you’re driving in your car, there’s no law that says you have to properly and safely restrain your babies. The air lines are worried you’ll balk at the cost of an additional seat, and travel by car instead. When the kiddo is over age 2 and has to have their own seat regardless, many parents just aren’t up for the task of bringing a car seat on a plane.

Car Seat Lady does a great job of explaining why this “hassle” is wise. She also scares the shit out of you in the process, just like my blog about lap children probably will.

A few weeks after our trip, I flew for work and witnessed a mom traveling alone with her two children. One was under age two, the other just over two (I’m guessing based on size). The mom used only the lap belt for her older child and put the younger on her lap. We were flying in and out of Denver, an airport known for turbulence due to drafts coming off the Rocky Mountains. I was nervous, especially when they boarded the plane and immediately fell asleep–meaning that they went through takeoff and ascent like this: 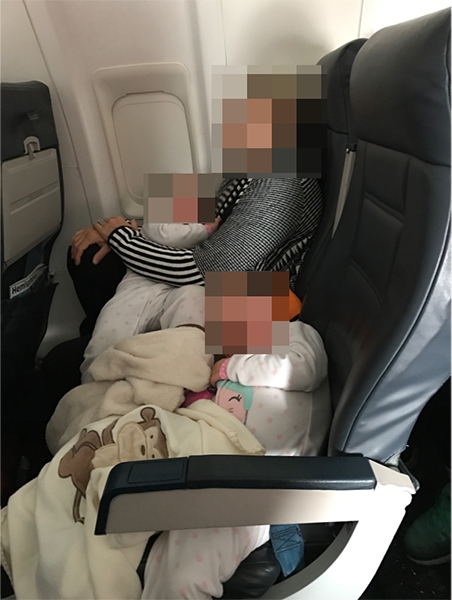 One big bump and that little one would’ve been on the floor, or worse, had a head injury. Yikes. They got lucky, but she was certainly hedging her bets with this setup. And it’s shocking to me that we secure coffee pots and laptops so they can’t budge during takeoff, but this is how we treat the most precious among us.

We can do better.

This post contains affiliate links. If you click through and buy something, I might get a little cash money! Woop!
The Jet.com one, however, is not an affiliate link. But I felt like I had to include it because it’s cheaper than Amazon.