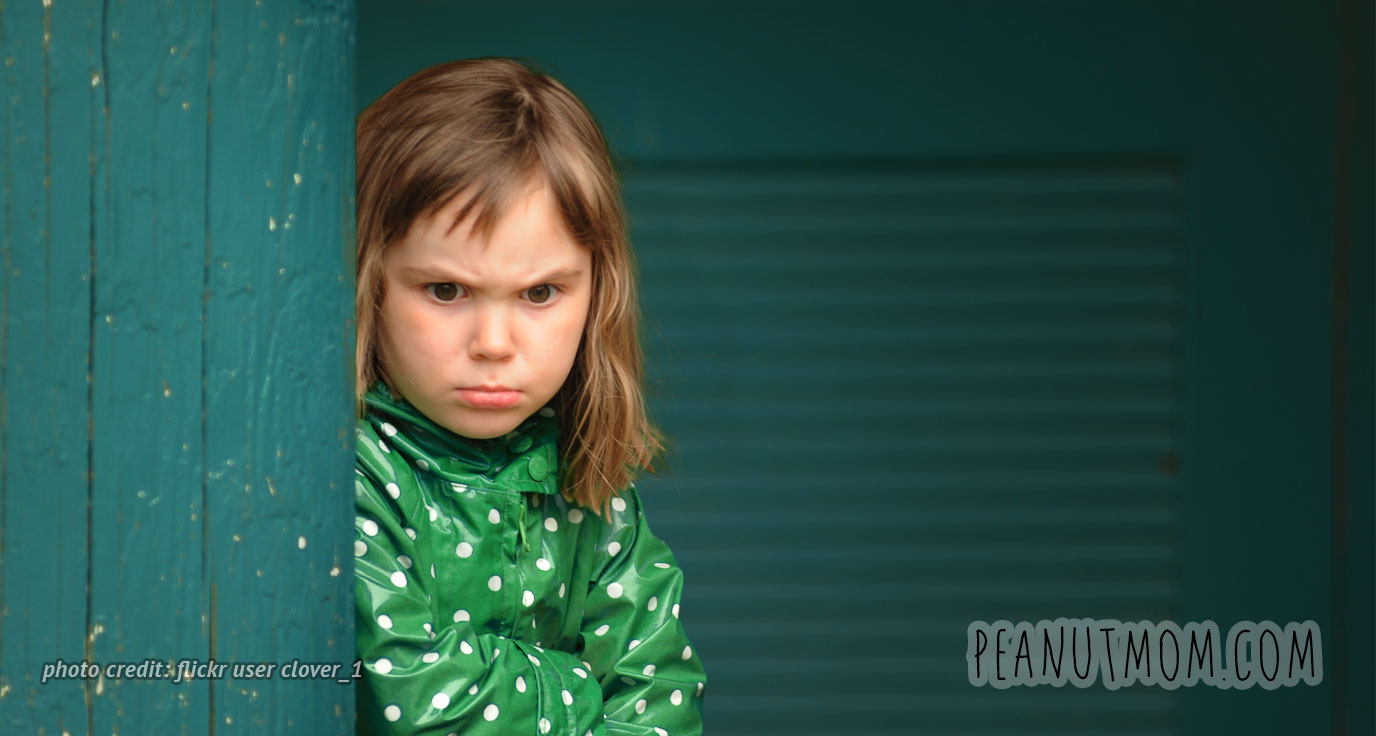 I’d bet every mom has a long list of about-faces. I personally vowed I’d never let my kids play on a phone at a restaurant. They would sit there and mind their manners, dammit!

Reality wasn’t quite so pleasant. I seriously underestimated the value of a few minutes’ peace to drink a beer and have an adult conversation. (“Here, Squeak, take Mommy’s phone. Watch a Super Why. Have at it.”)

(Thank goodness for Guided Access mode on my iPhone. Otherwise he’d have long ago had a conversation with China.)

I admit it—I’ve changed my mind on a few matters. But I’m equally capable of being a hardass. I get shit about it, but sometimes, Mama has to hold her ground. For example:

Stuff you put in your body

No juice, come hell or Halloween

Nathan and I don’t let our kids drink juice. Daycare is probably more than a little annoyed by this, because when they’re serving snack, they have to remember to give our kids water. Luckily we’ve been doing this long enough with Peanut that even when the teacher forgets, her classmates remember. They shout, “PEANUT GETS WATER, HER DOESN’T GET JUICE!” I’ve seen the kids in action; it makes my heart happy.

Just today, Peanut’s class had a Halloween party, so her teacher called to ask if Peanut could have a Capri Sun. “Go ahead and offer it to her,” I said confidently. “She probably won’t drink it.”

Why are we juice haters? Most is just sugar with a tiny tinge of fruit thrown in so they can call it juice. Someday I’ll open the flood gates on sugared drinks, but for now, my kiddos love milk and water, and I am totally okay with that.

Our kids’ daycare serves PopTarts as morning snack about twice a month. As a rule, my kids aren’t allowed to partake.

I can feel your judgment. “But Lydia! It’s just a harmless breakfast toaster pastry!” Harmless? Not so much.

A single pastry is 200 calories, 150 of which are from carbohydrates. The 17 grams of sugar are equivalent to over 4 teaspoons worth. A PopTart is one third sugar by weight. There is less than 1 gram of fiber, and despite the labeling saying Trans Fat are 0, there is a certain amount present due to the use of partially hydrogenated vegetable oils. And the “BAKED WITH REAL FRUIT!” screaming from the front? That’s less than 2% of the ingredients. For a toaster pastry wrapped around a fruit filling, that’s pathetic. Plus the ingredient list runs to 36 separate ingredients, including sugar, high fructose corn syrup, and dextrose. That’s three types of sugar.

PopTarts are not okay for growing bodies. Mama isn’t giving in on this one.

My kids aren’t good eaters (for background, read these). We’re working on adding new foods, and we continue to see the feeding specialist, especially for Peanut (she’s worse than Squeak). They’ll both tend to shun their dinner and hold out for a snack later. So I came up with a new rule: bedtime snacks can only be fruit.

This was only possible because Squeak added six new fruits to his repertoire recently: mandarins, pears, peaches, pineapple, apples, and banana. When they want a bedtime snack, they’re offered those six fruits plus raisins.

Peanut and Squeak watch three kinds of television, and that’s it. Most of their TV-watching is shows on PBS Kids. They’re obsessed with Super Why and Thomas the Train (that one’s mostly Squeak—he calls it Thomas the Train instead of Thomas and Friends, so now that’s what we all call it). Lower on the list are Wild Kratts, Daniel Tiger, and Sesame Street. It’s all we let them watch, because we don’t like the over-commercialized crap that Nickelodeon and Disney pass off as kid programming. If our littles are in front of a boob tube, they better be learning something.

We have PBS to thank (in part) for Squeak knowing all of his letters, both upper and lower case, including their sounds. He knows how to count to 12 without skipping any numbers. And all this just 3 months past his second birthday. Mama’s little brainiac. He’s absorbed so much good stuff from those shows.

Pixar movies are occasional treats. (Wall-e and Frozen have life lessons in there, I swear. Like “don’t litter” and “don’t be a bitch to your sister.”) Aside from PBS and Pixar, the only other thing we watch on the big TV is football, and we’re a Packer family.

That’s all they watch, and sometimes, it shows. One Sunday Peanut was watching the Packers with her daddy and suddenly burst into tears. “PUT FOOBALL BACK ON! MORE FOOBALL, DADDY!”

It took us a second, but we realized with a laugh that she thought the game was over… when it cut to a commercial break. She had no idea what a commercial was. I’m proud of that. Commercials suck. I’d rather my kid tell me what she wants from Santa, and not get ideas from a bunch of marketers.

Our bedtime routine begins with pajamas and milk (sometimes a snack too). Next is brushing teeth, then books. After that, there are songs for Squeak while Daddy snuggles with Peanut. When songs are done, I tuck in Squeak, then go to Peanut’s room to kiss her goodnight and give her a massage. (One night I missed bedtime for a massage appointment. To make up for it, I told Peanut I would give her a massage the next night. That was two months ago; she asks for one every single night. I’ve created a monster.)

Sometimes the wheels fall off and we have to cut something from the routine. I’ll cut Squeak down to one song, and reduce the massage to just her feet. We’ll skip milk. But we never skip books. We may read two instead of five, but we almost never skip them completely. Books are the route to vocabulary and good reading skills.

No TV in the car on trips less than 90 minutes

This was something I thought I’d never do, but the first time I drove 2+ hours by myself with a one- and a three-year-old, I changed my tune. It was awful, not to mention dangerous. They scream and make irrational demands, and I have completely lost my shit a few times. The DVD player and iPad have saved my sanity (and our lives) multiple times.

BUT—and here’s the hardass part—I only let them watch videos on car trips over 90 minutes. Because they should be able to amuse themselves for that long.

I don’t have a built-in entertainment system in my car, and I’m not sure I ever will. I don’t want the TV that front-and-center; it would be a recipe for epic tantrums.

I see local moms running kids to school or daycare with the TV on. I have to admit I don’t understand why you’d open that can of worms. Kids need to know how to amuse themselves in the car. We adults did! I Spy, 50 States License Plates, There’s a Wall Here And You Can’t Touch Me (ha!), etc. Be old school; make them figure it out.

Nap (at least for Squeak)

Hell hath no fury like a two-year-old who’s missed his nap.

Nothing comes between Squeak and his nap as far as I’m concerned. At the State Fair this year, the wonderful Grandma took Squeak on a stroller ride every day at 1:00 p.m. until he fell asleep, then waited in a shady spot while he dozed.

I never make plans between 12:30 and 3:00 p.m. If a guest arrives earlier than expected and during nap, we turn them away kindly and ask them to come back after 3:00 p.m.

It’s just not worth it. Everyone suffers—me most of all. Naptime is sacred. (Saturdays and Sundays, don’t bother calling or texting from 12:30-3:00. Chances are good I’m napping too!)

This is a no-brainer, but it’s not fun. Squeak especially hates having his teeth brushed. For almost a year, we had to pin him down under our legs to brush his teeth. He’s only recently started letting us brush his teeth without a fight.

I wish my husband was on board with this rule. He’s not. One morning when I was on solo morning duty, I had everyone ready to go except for teeth-brushing.

“Okay, let’s brush teeth and we can go!” I announced.

Peanut put a hand on her hip and arched her eyebrows. “We don’t brush teef in the morning, Mommy. Daddy says so.”

After that, I made a bargain with Nathan. Every morning he brushes their teeth, he can deduct 25¢ from the swear jar debt he’s racked up. It sucks that he doesn’t just “get it” without being bribed, but whatever.

Kiddos get their own seat on a plane

Duh. This should be the law, not just my own rule. If you need convincing, read this blog post. It’s the most popular post I’ve ever written and gets more hits than anything else, month after month.

I’m part of a local moms group on Facebook, and every week it seems, someone poses a question about vaccinations, and I lose my mind a little.

Asking 2,000 random women their uneducated opinions about vaccinations is just inviting stupidity to open its mouth. The anti-vax propaganda they spout, as if it’s actually true, makes me want to claw my own eyeballs out.

Vaccinations save lives. The flu shot saves lives, especially children. Is it foolproof? No. Am I going to take the chance? Also no.

Yeah, like everyone else, there’s a lot I do that I said I never would. But it’s not Pushover City. I can be a hardass when I want to be. Now if you’ll excuse me, I need to read three Thomas the Train books and put the littles to bed.