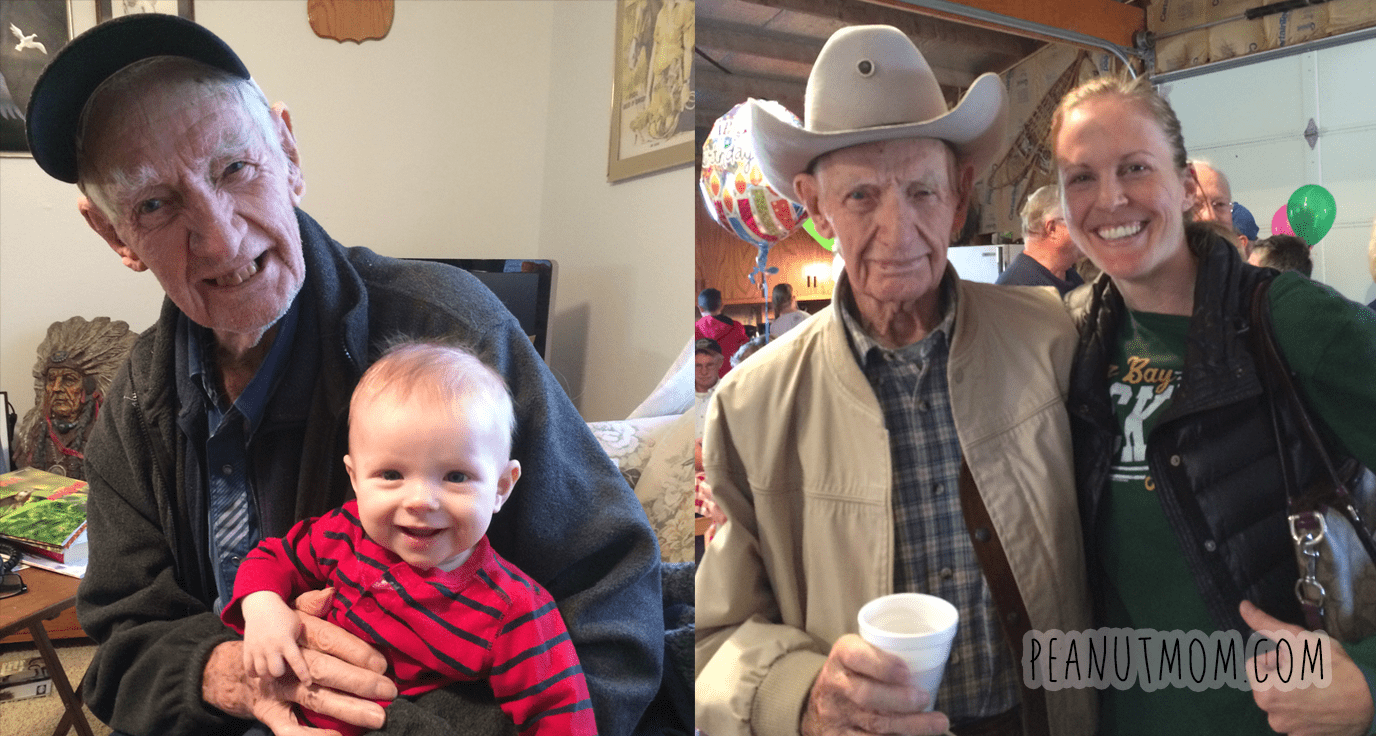 I was driving home from work when my phone chimed. A text from my husband.

My heart dropped. Orv is my oldest friend. And by that I mean, he is the oldest of my friends; I attended his 95th birthday party just three weeks ago. A few days later, a brightly colored piece of paper was taped to his front door and the frequency of cars in his driveway increased.

On my next trip past his house, I slowed until I could read the blocky letters on the paper: OXYGEN IN USE.

This was new. Orv was not on oxygen at his birthday party. He was standing, talking, and cracking jokes. Something had happened.

I put in a call to Penny, a retired nurse who, without expecting anything in return, had been checking on and taking care of Orv for several years. She and a second woman, Constance, took care of him as if he were family. They weren’t blood relation at all. They were just amazingly good people.

At Orv’s party, his son-in-law stood next to Penny and Constance and thanked them for their selfless care of his father-in-law.

“Nowadays, everywhere you look, people are doing awful things to each other. Nothing but bad news, whether you’re picking up the paper or turning on the TV to CNN or Fox News. But these two women…” he said, pausing to find the right words. “These two women are proof that good people exist and are right here among us.”

The warmth in the room was palpable.

Penny started to get a little choked up, and the son-in-law made a few jokes before we all sang Happy Birthday to our guest of honor. Orv stood with a soft smile at the front of the room, arm in arm with Penny and Constance.

A few days later, Penny told me that Orv had fallen the night of his birthday party. His family had brought in hospice care, and since he wished to die at home, they replaced his stalwart sofa with a hospital bed.

He’d spent most of his time on that sofa, snoozing fitfully during the day, curled up under an afghan at night. When I drove past, I’d peer through the crocheted curtains, breathing a sigh of relief when I’d spot him in his recliner reading western novels under a glaringly bright light. Orv used a magnifying light meant for jewelry makers and miniature hobbyists; after 95 years, his eyes had deteriorated to the point he couldn’t read the small print in his beloved Louis L’Amour books.

I took in what Penny had told me. I’d known this day would come. When you make friends with someone in their 90s, you cherish every interaction, knowing it could be your last. Orv had surprised me for years, overcoming several health scares and coming out nearly unscathed, albeit slightly weaker, every time.

This past summer he’d been nearly absent from his front porch, where he used to be a fixture in warm weather. Orv would smile and wave at everyone who paused at the 4-way stop in front of his house. It was on this same front porch that I met him in 2012, my first child, Peanut, growing in my belly.

He was the most pleasant nonagenarian I’d ever met, always upbeat and happy, delighted just to be alive, it seemed. He loved visitors, always greeting me with unadulterated happiness.

He welcomed my little growing family with open arms, never complaining when my miniature schnauzer jumped onto the sofa for ear scratches. Orv even shrugged it off when a toddling Peanut grabbed a figurine from his side table and snapped its head off.

“It’s no big thing!” he reassured me. I took it home and glued it anyway. I felt guilty for her, and later Squeak’s, destruction.

He never seemed to mind, and he just occasionally gave me a hard time for not visiting more after the kids were born.

“I know, kid, you’re busy. You got better things to do than spend time with the likes of me,” he’d say.

I appreciated his understanding, but I also knew that taking 30 minutes out of my week could make his entire day. I wish I’d visited more.

When I could, I visited alone. One visit, I noticed his fingernails were long. A life-long working man, Orv’s nails were yellowed and thick, and looked difficult to clip. I asked him where he kept his clippers and fetched a kitchen towel, spreading it between our laps. I clipped his weathered nails, gingerly moving his knotted hands, fingers bent from arthritis. Orv joked about how long it’d been since a pretty girl held his hand. It was an everyday act that, in that moment, felt very intimate. It brought with it a pang of nostalgia and a realization that I’d never shared a moment like that with either of my grandpas before they died.

Last summer, in my seventh month pregnant with Squeak, as I sat on the sofa with Orv, the baby started to writhe and kick. I put a hand on my stomach, smiling, and explained that the baby was kicking. The look on his face was wistful, and a small smile lifted the corners of his mouth. I took his hand, pressing and holding it at the spot where Squeak’s acrobatics were the most obvious. We sat that way for a minute, just marveling at the wonder of it all, the miracle of babies, and a new life soon to be. It was not lost on me that Orv and the baby in my belly would be born nearly a century apart.

After reading my husband’s text, I wrestled with the decision of what to do. I wanted to see him, to say goodbye to my friend. At the same time, I was terrified to see him, to be in such close proximity to death. I wasn’t sure I could handle it.

I got nearer to his house and saw the driveway and most of the yard were filled with cars. My stomach dropped again. I was too late. I had waited too long.

I pulled into an apartment complex past his house and called him. A man answered, and I explained I was a friend of Orv’s, and had seen all the cars at the house. I asked how he was. The man handed the phone off to one of Orv’s daughters, Cheryl, a woman in her 70s.

“The nurses are calling it the end days,” Cheryl said gently. “The whole family is here with him. You’d have thought he was gone this morning, but he’s been cracking jokes today and being naughty.”

“Would it be okay if I came by to see him?” I inquired. Some small part of me hoped she’d say no; I was so frightened to see my friend, sick and dying. But a bigger part of me knew I would regret not saying goodbye.

I could hear the smile in his daughter’s voice. “He would love to see you, dear. Just park in the yard.”

Two men stood out front. “Go on in,” one said, and I recognized him as Orv’s son, from the birthday party.

I entered the house quietly. The living room was full of people, including Constance, who was getting up to leave, overcome with emotion. She wiped tears from her eyes. The next-door neighbor and his wife were saying their goodbyes next, and I waited awkwardly for my turn at his bedside, fighting back tears.

Orv was pale, his normally bright eyes distant. He could talk, but just a whisper. I moved to the chair next to his bed, and a woman at the foot of the bed introduced herself.

“I’m his granddaughter,” she said.

“I’m a friend of his. I just come by and visit him sometimes,” I told her. Later I’d realize I forgot to say my name.

I sat down and picked up Orv’s hand. His palms were cool, the calluses unusually soft today.  He squeezed intermittently, seemingly against his will, and I knew the end was near. His granddaughter held his other hand as he struggled to sit upright.

I heard Cheryl behind me, explaining to a few other family members who I was.

“She’s the one who’s visited Dad the past few years… quite a bit, actually. He talked about her and her little ones,” she said.

I turned and met her smile.

I stayed there, holding his hand and talking quietly with him. He was definitely ornery, calling his granddaughter a blonde heifer, and his son an ‘old gray fart’ when he walked past. He said these things with a smile, without an ounce of spite, just like he always did. Orv said everything with a smile.

His granddaughter would adjust his position every few minutes, asking him, “How’s that, Grandpa?”

Even in his final hours, he was still happy.

“Orv, I’m gonna get out of your hair,” I told him, still holding tightly to his hand.

He lay propped upright in the hospital bed, and I leaned over him. I gave him a kiss on the cheek, and as much of a hug as I could manage, squeezing his shoulders. He squeezed me back, and brushed my cheek with his face. Then he hugged me a second time. I gave him another hug back, and a second kiss. Tears ran down my face.

I stood. Looked down at him, trying to memorize his face, while simultaneously hoping that the years of memories I had wouldn’t be erased by this weakened version of him.

Cheryl stood and met me as I turned away from the bed. She enveloped me in a hug, and I laid my head on her shoulder and cried. She held me tight. “Thank you for being a good friend to Dad,” she whispered.

I tried to compose myself; Cheryl handed me a tissue.

I took a shaky breath. “He’s a wonderful person,” I told her. “Thank you for letting me see him.”

She kept an arm around me. “Do you have someone at home?”

I nodded, touched by her concern for me, a near stranger. I wrote down my phone number, so she could let me know if anything changed. I thanked her again and quietly left.

Visiting Orv tonight, holding his hand and knowing it was the last time, was one of the hardest things I’ve ever done. I missed the chance to say goodbye to someone I loved nine years ago, because I was afraid of being so near to death. I vowed to never let that happen again.

Orv always ended our visits the same way, for as long as I’ve known him. “You come on back and see me anytime you feel like it,” he’d say, standing at his front door, smiling his toothy grin. “And if you don’t feel like it, heck, you come and see me anyway.”

I did, my friend.

And I’ll miss you every day. 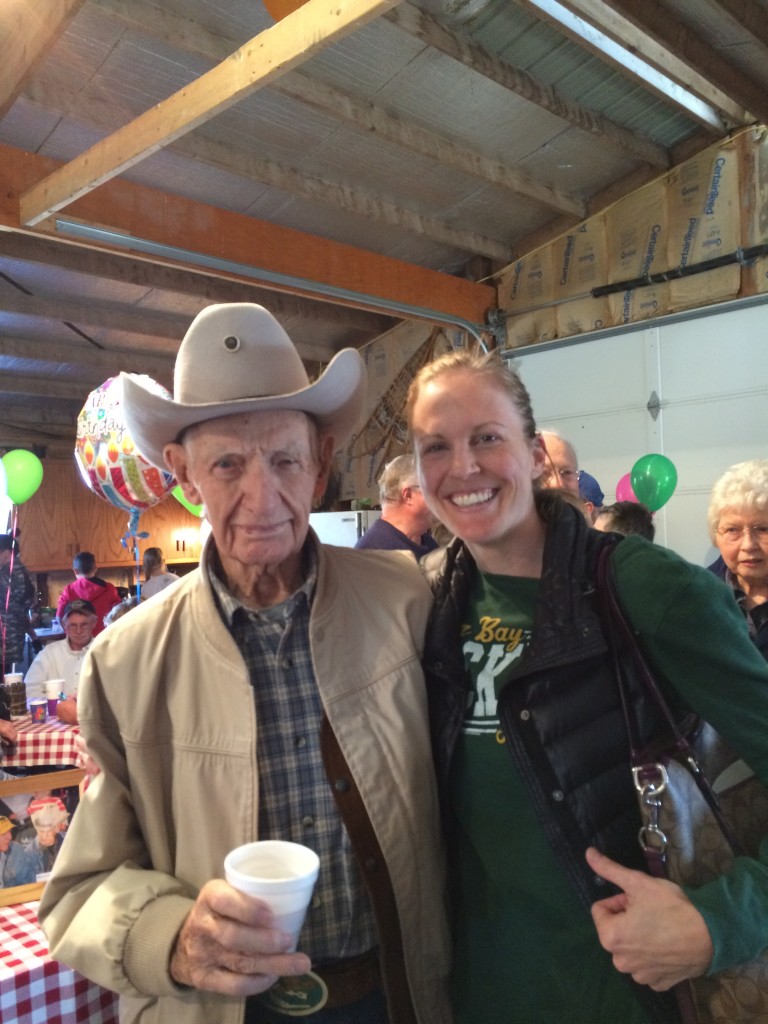