I’m just not cut out to go viral 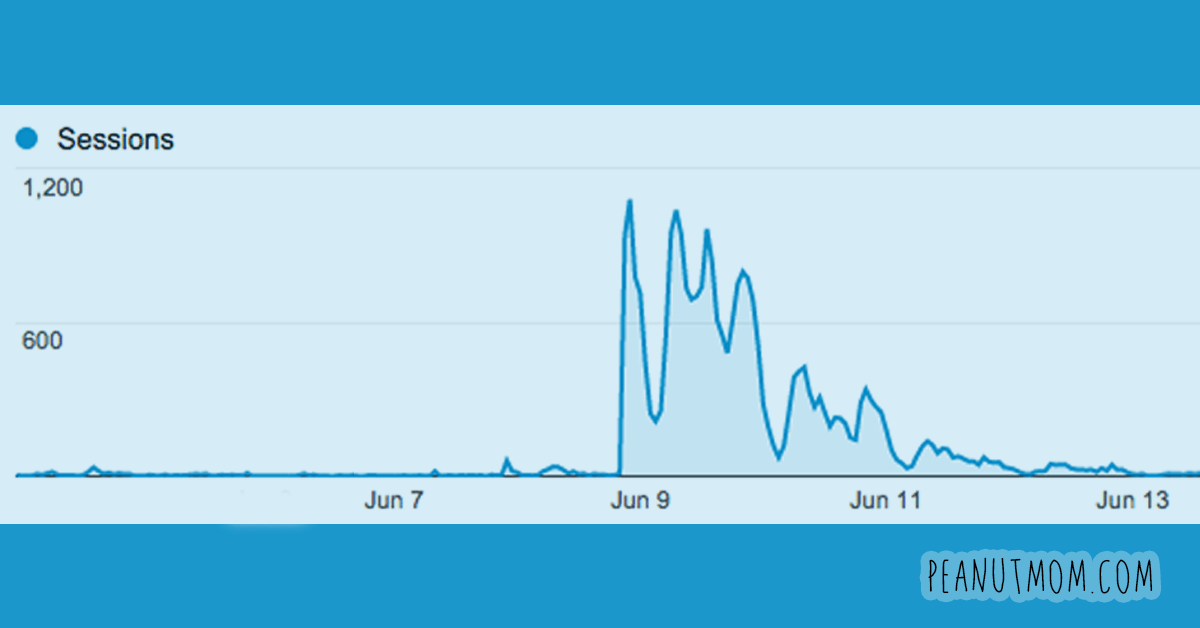 On June 8, I posted a blog about flying on airplanes with your child in your lap. It’s a subject I’m passionate about, so after it came up in a casual conversation earlier that week, I decided I would pull together everything I’d read to try to shed some light on how dangerous the practice is.

I wanted to do it right—I researched about 4 hours, then spent around 90 minutes writing the actual post. I spent another 45 minutes creating a graphic to use as the post’s main image. Then I posted it, shared it with my friends on Facebook, and went to bed.

The next day, a few friends had commented on my Facebook post, thanking me for the information. But it didn’t seem to get much traction in my circle, much less beyond.

At bedtime the following night, my phone sounded the ‘ding’ of a new message. I had a new comment on my blog. The commenter was a stranger, a woman whose name I didn’t recognize, letting me know she was unhappy with what I wrote. She was offended by this line: “Also, due to nutso libertarians taking over the U.S. government, there are no seatbelt or child restraint laws anymore.” (I was presenting a made-up scenario set far in the future… go read the whole thing and it’ll make more sense.)

Her comment: “I eye rolled and stopped reading at ‘nutso libertarians.’”

I don’t know how many people read my blog, but it rarely makes it outside the small Facebook universe that includes my husband and me. I replied with a snarky comment (“Yet you took the time to leave a comment. Bravo.”), assuming some random troll had stumbled across the blog, and went to bed.

The next morning I had two new comments. This was weird. Nobody ever comments on my blog. Later that morning, even more came in. Then I noticed the ‘top posts’ tracker. My airplane post had suddenly skyrocketed to the top of the list of most-viewed posts. My previous best had been around 2,000 views. The airplane post was at 9,000 views and counting. I waited five minutes and refreshed the browser, and the number jumped by 150 views. Holy crap.

I discovered through Google Analytics that my views were driven by Facebook, so I did a public search for my blog and found lots of shares from multiple influencers. And at the same time, I found comment threads under these shares where people discussed my blog and what they thought of it.

I started to read through the threads…and immediately got upset. Big mistake. More people were pissed about the ‘libertarians’ part. All that good information, so painstakingly researched, and based solely on that, they decided my entire post was garbage? “I was turned off by the libertarians comment,” one said. “She really harms her credibility with that remark.”

Others thought I was being alarmist, since the actual chances of a plane crash are very low. They dismissed my post as overdramatic sensationalism.

Back on my blog’s comments section, more people were chiming in. A guy named Seth was making a case that my logic, when extended outside the flight scenario, meant that we shouldn’t let our children ride bikes or do anything remotely dangerous. A woman named April posted an additional comment about the ‘libertarians’ line: “I think you dimished [sic] your audience and your ability to reach people when you started name calling. Not all libertarians feel that lap children are a good idea, and they aren’t the only group of people that think the laws of physics don’t apply to their child until the age of two. Singling out one group of people for something so beyond that seems a little single minded.”

A little later, someone named Eric accused me of spreading “mom-blog ‘don’t you care about your baby?’ scare tactics.”

Now I was angry. I wanted to inform, not make people feel bad. I hoped to illuminate others just as flight attendant Jan Mohr had illuminated me many years ago when I heard her on the radio, talking about why she felt  infant in arms should be abolished.

Then came the icing on the cake. “Ali” posted this comment: “I’m so confused- why is the title of this post ‘Why I’ll always buy an extra seat’ when the author explicitly states she’s not traveling anywhere for two years purposely to avoid paying for an extra seat? Also, comparing plane crashes to car crashes is just absurd, for so many reasons. The author decided not to travel anywhere for two years, so good for her. I’m guessing she lives close to family and friends and probably doesn’t need to travel to see family or spend holidays and special occasions with them. Not everyone is so fortunate. And mommy-shaming other mothers into making the same decision she made is more than a little self-righteous, in my opinion.”

I was nearly shaking. Mommy shaming? Self-righteous? I wanted to alternately cry and reach through my computer to strangle this woman. She didn’t even know me. Why was she—and everyone else—attacking me? And why couldn’t this particular mean girl talk directly to me, instead of commenting in third person? I’m right here, Ali, so deliver your insults to my face.

I had finally written a blog post that was going viral. Wasn’t this supposed to be fun? My page views were climbing rapidly toward 20,000, then 25,000… but instead I felt like the entire world was out to get me. Thanks to 11 blog comments and a handful of Facebook threads.

That evening, my phone dinged with a new email: another blog comment. That sound had started creating major anxiety for me. My stomach started to churn. What was it this time? Who was after me now? I read the comment, which wasn’t very positive, and went to my laptop to fire off a reply. Watching me, my husband gently asked me why I was taking the time to even respond to the comments. He pointed out that every snarky reply I posted made me the jackass, not them.

At first I was mad at him. How dare he not support me! Plus he’s always starting fights online, calling names and getting way too personal. So when people come after me, I’m not supposed to defend myself?

He explained that a Facebook comment was different from fighting with people on my own blog’s comments. And after I calmed down a bit, I realized he was right. I was doing myself no favors.

My goal from the beginning was to spread awareness about the dangers of flying infant in arms. My defensiveness was taking away my credibility as a source, and accordingly, causing people to dismiss the information I shared. Exactly the opposite of what I had wanted.

I logged into my blog and turned off comments for the airplane post. Then I went back to my snarky comment replies and edited out the worst parts. I was embarrassed.

My airplane post now has over 30,000 views, which is pretty cool. I stopped searching on Facebook to see who’s sharing it, and what people are saying in response.

One thing is very clear: I am way, way too sensitive to go viral. I just can’t take the heat that the Internet dishes out.

It seems that people, when hiding behind the safety of a computer screen, are just plain cruel. They don’t stop to think about the person on the other end of their comments. They read an article they disagree with and only see a villain: someone who must be knocked down a peg, until they realize how insignificant and wrong they really are. That ‘someone’ was me.

To Ali, Seth, Eric, and the other commenters, I wasn’t a mom worried about her children, just as they are. I was an anti-libertarian idiot who had pulled my flight crash statistics out of my ass, and had over-sensationalized something with the explicit intent of going viral and getting attention (completely not true).

I’d always thought it would be fun to have a post go viral. But now I know that it comes with a hefty price tag: my confidence. Maybe next time (if there is a next time), I’ll have grown a thicker skin. For now, I’ll just hang out here in my little quiet corner of the internet, hoping the mean people don’t find me.