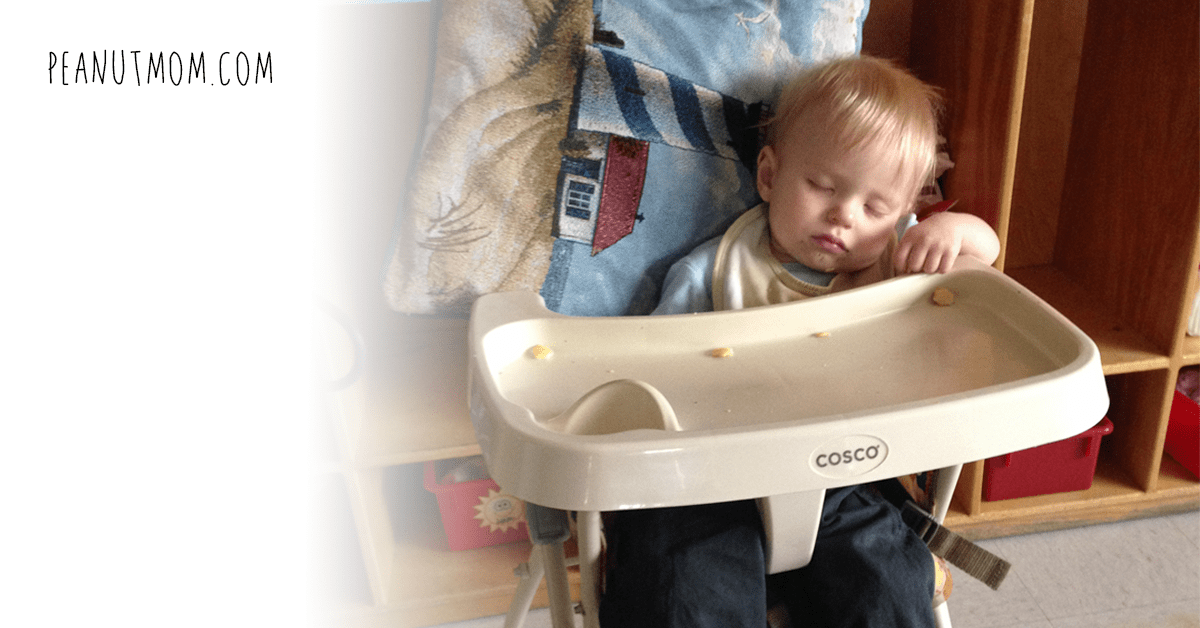 My first child, Peanut, started sleeping through the night around 4 months old. I don’t mean “five hours straight”—I mean that she went to bed at 7:30pm and didn’t wake until 6:30am or later. A rock star sleeper.

As the rookie parent I was, I chalked it up to my amazing parenting skillz. We had a set bedtime routine just like the books said we should. I kept the lights low, the sounds calm, and put her down ‘sleepy but awake.’ She’d drift off to sleep in her crib without a peep of protest, sucking earnestly on her thumb.

I had this parenting stuff NAILED, man.

She regressed a bit when she got her first tooth at 6 months, waking once a night to nurse. I remember being so tired when she’d wake me at 2am for a little milk. I couldn’t wait for the night feedings to end. But by 10.5 months, she was back to sleeping 12-13 hours straight and never looked back.

Then I met Squeak. My amazing, beautiful little blue-eyed boy. My last baby.

The first few months, his sleep habits were nearly identical to his big sister’s. But when we hit four months, he was still waking at night to nurse. Not once or even twice, but at least three times.

This made no sense—I was doing almost everything just as I did with Peanut. Admittedly, our bedtime routine was a teeny bit more lax, but I put him down awake, didn’t nurse him to sleep, and followed all the “rules.”

We hit 5.5 months and he got his first ear infection, which lasted right up until he got tubes put in at 7 months. During that awful stretch, he was waking about four times a night. I was so exhausted I’d bring him into bed so we could both get some shut-eye.

After the tubes, things got only marginally better. We went from 3-4 times a night to a solid three wakeups, with an occasional fourth. This routine continued through his eighth month. And ninth month. And tenth.

Finally, just about a week ago, at 11 months old, he finally started dropping that third feeding. We’re now down to a blissful two wakeups most nights.

(It’s amazing what getting 4 straight hours of sleep feels like, when you’ve gone nearly a year without it.)

I’ve put a few ground rules down—I won’t nurse him before midnight (like a Gremlin, but backwards); if he wakes, I make Daddy go in to soothe him, and after rubbing his back and kissing him, he leaves and we let him cry until he falls asleep (usually 2-3 minutes).

Yes, I know, we’re awful, how dare we, blahblahblah. I’m sorry, but CIO (cry it out) is what we’re left with when nothing else works. We’ve tried. I’m aware that I am permanently scarring my child and he’ll probably end up in prison, muttering under his breath that it’s all my fault for letting him cry for five whole minutes as a baby.

(I’m being sarcastic. I don’t believe all that hype. He’s almost one—he can feed himself and solve problems on his own. A little crying won’t destroy his self-esteem. And he knows he’s not abandoned. We always check and console before letting him work it out on his own, so he knows we are there for him.)

Still… I can’t believe that almost a year after I birthed Squeak, I’m still waking up twice a night. I went into Kid #2 thinking I was such a great mom, that I knew the secret to having a great sleeper.

Turns out, I do know the secret.

GIVE BIRTH TO A CHILD WHO LOVES TO SLEEP.

It’s luck of the draw. You pretty much have no control.

Are there things you can do to affect your child’s sleep hygiene? Yes, for sure. Teaching them how to fall sleep on their own (the sleepy-but-awake thing). Not nursing them to sleep or laying down with them until they fall asleep. A set bedtime, a dark room, and white noise. I estimate these things, if done perfectly, can affect about 20% of baby’s sleep.

But the fact remains: you could have the Cadillac of sleep routines, with the most disciplined bedtime regimen and sleep environment, and still find yourself soothing a baby that just keeps waking up.

Recently on Facebook, my local mom’s blog asked everyone how many times their child woke per night, and the child’s age. There were a few rock star sleepers in there, like Peanut. But the majority of babies were not that different from my Squeaker (most were just a teeny bit better, but not much).

I was annoyed. Implying that a set bedtime routine was the reason behind just one waking at night? Puh-lease. Rookie.

She reminded me of ME, when I had just one kiddo who slept well, reveling in my parent awesomeness.

The other moms in the group fired back, saying that they too had set bedtime routines, yet still had a baby who woke several times a night.

Us moms of 2+ understand that it takes a second kid to realize how much of your parenting is chance and how much is actual skill. First-time moms don’t have that perspective yet.

(They will. And for every sanctimonious comment they make, they’ll get paid back tenfold by the universe and ‘Baby Sleep Karma.’ I am living proof.)

Parenting does that—it builds you up and tears you down in equal measure. For every victory (‘Yes! The bedtime sticker chart worked!’) there are even more failures (‘OMG why won’t my kid eat anything but carbs and dairy?! What am I doing wrong?!’). For every Mommy Brag you tell your friends about, there are five things you don’t want anyone to know, because you’re embarrassed, and pretty sure they’d think less of you as a mom and a person.

Going a year without getting long stretches of sleep has changed me in a couple of ways:

At work, I’ve learned to write everything down, because I will forget it otherwise.

If you’re lucky like me, you have a team of people trying to help you get some extra sleep. Like my supportive husband who, when he’s home on weekends, lets me sleep in until 7:30 or 8:00 and nap on Saturday and Sunday afternoons (and sometimes, even lets me catch a tiny snooze right after I get home from work). Or wonderful parents and in-laws who take the 6am to 8am shift on weekends when they visit, so I can get some bonus shut-eye.

I get by. I feel refreshed on Monday mornings. I’m dragging by Friday, but I survive.

I’ll complain about it, but I keep coming back to this: Squeak is my last baby. In some small way, I enjoy our middle of the night feedings. I know these days when he depends on me will soon end, and I’ll be sad.

So I’ll suck it up, complain a little to the interwebz, but I’m not ready or willing to do anything drastic to change the situation.

Eventually he’ll wake just once…and maybe someday he’ll sleep all the way through the night. It’s hilarious to think that Peanut started doing that at 4 months old, and here we are, on the eve of Squeak’s 1st birthday, and he’s never done it. Ever.

My babies… conceived on exactly the same day, stored in the same freezer, created from the same batch of spermies and eggs… and so completely, wonderfully different. They’re constantly reminding me that I’ll never, ever be able to claim I’ve “nailed” parenting.

I always have more to learn.