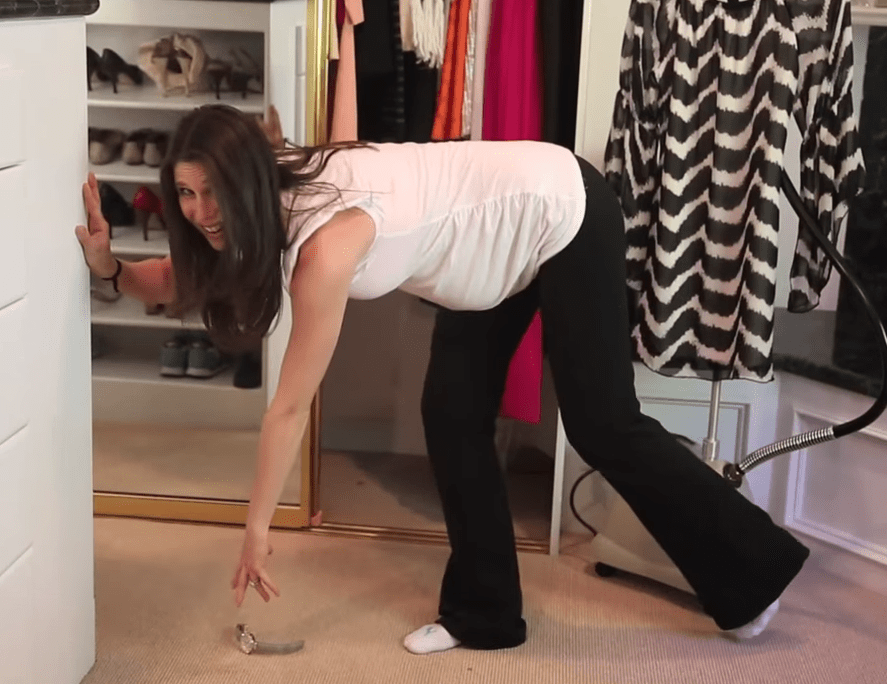 If you haven’t watched their awesome viral video yet, you must watch it now. Elle and crew over at WhatsUpMoms made a hilarious parody called I’m So Pregnant. The ‘so pregnant’ Meg, above, laments that she can’t bend over because it would defy the laws of physics. I hear ya, sister.

When you’re 32 weeks pregnant like me, with a belly that’s close to getting its own zip code, “How are you feeling?” is a popular question.

My typical answer:  “Rotund. Uncomfortable. Tired. And I don’t remember it being this hard last time!”

The veteran moms smile and remind me that last time, I wasn’t chasing a toddler while pregnant. So true.

When you’ve overcome the bone-tiredness of the first trimester, you generally cruise through the second trimester. But the real fun comes in the third, when your belly has begun to get in the way and you can’t move around like you want. Suddenly everything gets harder. A lot harder.

Much more difficult than I remembered, actually, and I couldn’t figure out why… until I had a lightbulb moment last week.

I had put Peanut to bed and was doing my typical Baby-Just-Went-Down routine — picking up all the toys in the living room, fetching abandoned sippy cups from the dark corners of the kitchen floor, sweeping up scraps of food the dog missed — and suddenly, I figured it out.

When pregnant with Peanut, my entire world was waist-high, or sometimes higher. With a 22-month-old, a lot of what you do tends to take place around your knees. Here are a few examples of things I do in a typical day that involve bending over or sitting on the floor:

When I asked my husband for more examples, he shook his head. “Everything I do with her involves bending over or sitting on the floor. It’s where she’s at, so you can’t really avoid it.”

He’s right. Luckily, he’s started to figure out just how difficult it is for me to accomplish these things, so he’s taking more bath shifts at night to save me from contorting myself into our itty-bitty bathroom.

Instead, I clean up her dinner mess in the kitchen, which is much less fun than watching her splash happily in the tub, but at least it doesn’t cause me physical pain.

Only 8 more weeks until I get full use of my body back! Yippee!

(Until then, I’m going to ignore the fact that I’ll have another tiny person dependent on me at that point. Shhhh… allow a girl a little self-delusion.)