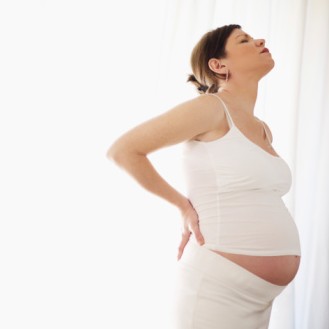 On Tuesday, during my morning commute, Squeak decided to work out his arms and legs. He (or she) does this a lot. But that morning, he was feeling especially rowdy.

He didn’t quickly kick one of his long little legs, or deliver a speedy right jab. He pushed out with his little foot, or maybe it was a knee, and kept pushing.

It HURT. I actually shrieked in pain.

Squeak does this pushing thing a lot. Things are getting tight in there and he’s cranky about the lack of space. My belly moves all day long, and if he strikes a nerve (literally), it hurts.

Those painful moments are when I think, “God, I am going to be so glad when I’m not pregnant anymore.”

I think it at 2:42am, when I’m wide awake, uncomfortable as hell. I think it when I stand up and immediately need to pee. Like, now. Not later. Right. Frickin’. Now.

It crosses my mind when I burp in the middle of a sentence while on a conference call (classy!), when I laugh at a joke and accidentally fart (oh shit, did anyone hear that?!?), and when I am in the shower attempting to shave my nether region, but then realize that no matter how I contort myself, I can’t even SEE my nether region anymore.

But the moment I allow myself to wallow in pregnancy self-pity, I am immediately struck by the other side: I’m also dreading the moment this all ends.

Squeak will be my last pregnancy. When I was pregnant with Peanut, I was fairly sure I could talk my husband into a second baby. I didn’t have moments of panic where I thought, Crap, I’d better cherish all this because I won’t get to do it again!

Not so this time. Unless I take up surrogacy, I’m done being a host for the particularly adorable parasites known as babies. Now I am panicking. I’ll never again be 32 weeks pregnant, taking video of my roiling and churning belly. Or any other level of pregnant. EVER.

I’m sure I’ll miss the kicks and pushes, not just immediately after Squeak is born, but for the rest of my adult life. I’ll look back fondly, despite the burping and tooting (which I would probably forget, except I’m putting it in this blog).

Some women hate being pregnant. Just google it — you’ll find a ton of articles about “I Hated Being Pregnant.”  As an IVF mom, that sentiment confuses me. I might hate parts of it, but I would never put the word ‘hate’ on the whole experience. Especially after what I’ve been through to achieve it. Some women hate it because they are incredibly sick the entire time. I can understand that. But hating pregnancy when you didn’t have an off-the-charts-awful pregnancy…that I just don’t get.

Despite the occasional misery, I am not looking forward to the end. Because I know it’s something I’ll never get to do again. Like high school — it might suck while you’re in it, but there are some really awesome parts, too. And once you’re done, you don’t get to go back.

Just in case you’ve never experienced the awesome sensation of being really pregnant, I took a little video of Squeak’s acrobatics tonight. The fun really ‘kicks’ in (pun intended) at the 0:52 mark. Holy moly!

30 weeks — baby is really moving! from Lydia on Vimeo.