The easiest infant to care for: the one inside your belly 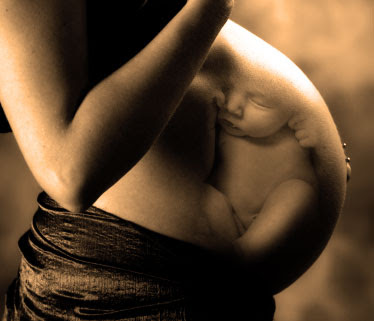 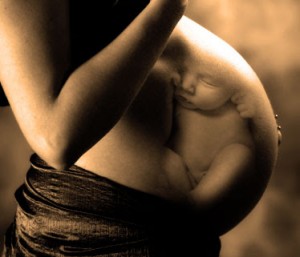 This seems incredibly uncomfortable. No wonder babies are born crying. They’ve got 9 months of resentment to voice.

Squeak is tucked safely inside my uterus, and should remain there for at least 8 more weeks. I’ve got two words in response: THANK GOD.

He (or she) is just so easy right now. Especially compared to my toddler.

A few weeks ago, Peanut had a meltdown just as my mother and I were sitting down at a restaurant. Peanut had stealth-pooped sometime after her last diaper change, and neither my mom nor I had noticed the little cloud of stinky following Peanut around.

By the time we got to the restaurant, she was very ready to be out of that diaper and had no idea how to tell us. She flung a spoonful of yogurt across the table and burst into tears just as I got a whiff of her stinky booty. Meanwhile, the family at the next table felt it necessary to glare at me as I wrestled with my screaming, writhing toddler.

(Oops, my bad, I forgot you never had kids and never used to be one. EXCUSE ME VERY MUCH.  Jerks.)

Unfortunately the jackass restaurant owner didn’t put a changing table in the restroom, so I had to take her to the car to change her. She was so raw from the extended poo-sitting that she wouldn’t let me wipe her clean, and the poo was halfway up her back and all over her clothes (which meant it was now all over the seat of my car).

I finally gave up and ran back in to tell Mom we were going home.  Restaurant meal abandon ship! Ah, parenting.

A few minutes later, as I was strapping my now-clean and naked-from-the-waist-down toddler into her car seat for the ride home (and thinking, “Thank goodness for leather seats, because I don’t know how I would have gotten poop out of regular upholstery!”), I had a thought about Squeak: he is SO EASY right now.

He just goes where I go, all the time. He doesn’t complain about the temperature (it’s always 98.6 in his world), the food options (he’s never hungry), and when he wants to nap, he just dozes off. It’s always dark and peaceful, albeit a bit loud, in utero.

(Little does he know his world will be rocked in about 8 weeks. Poor baby.)

Squeak is “so easy” now, and I thoroughly appreciate it, because I know it’s going to get harder. A LOT harder. Peanut is a pain in the ass to take places. She’s learned that if she doesn’t want to be picked up, all she has to do is go limp and relax her arms, so her armpits disappear.

No armpits = no lift point. Peanut is a sneaky little bugger.

She usually does her go-limp-no-armpits thing as we are leaving a store, or in the middle of Target, or sometimes before we even get into the car to go somewhere. It sucks. She’s getting stronger just as I am getting less and less able to hold onto her (my growing belly makes holding her to my front impossible; the best I can do is hoist her on my hip).

She suddenly has an opinion about everything — including her wardrobe. I’ve been dreading this.

At the shoe store, Peanut sat down and tried to put on a pair of black Nike sandals. I foolishly thought we were safe to buy them. Not so fast, Mommy. The next day she wouldn’t touch them (in fact, she threw them down and said ‘NO NO’). Nor the following day, or the day after that. We gave up after a week and returned them, instead ordering the same pair… in pink.

Because while she wouldn’t put on the black sandals, she was all too happy to wear her little pink ones.

I have a kid that likes pink. Oh, good lord. This pains me severely.

I didn’t have these thoughts when I was pregnant with Peanut. But this time around, I’m going in with my eyes wide open. I know exactly what I’m getting into. Which is why I know how awesome it is to carry a baby around in your belly rather than in a pumpkin seat. One is much, much easier than the other.

So stay in there, Squeak, as long as you can. Mommy needs every day she can get.