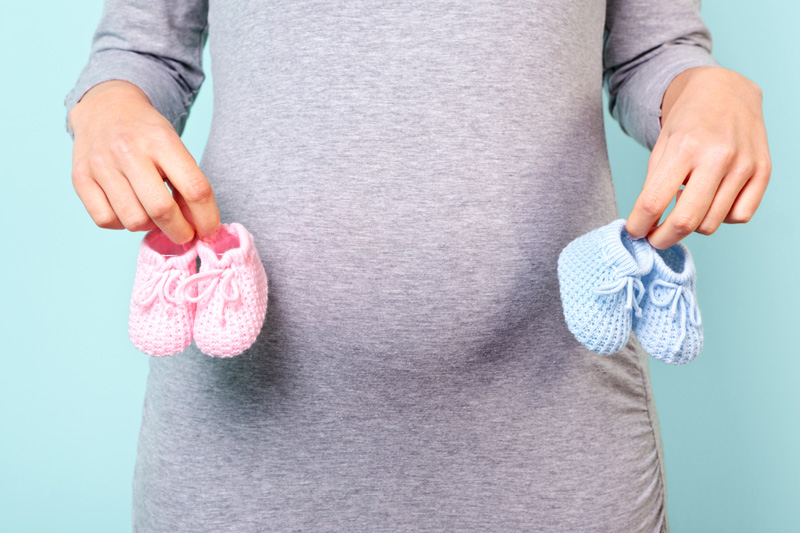 Second only to ‘How are you feeling?‘ in the hierarchy of Questions for Pregnant Women is ‘Do you know what you’re having?’.

I get this one a lot, and I like to tease people a little bit when they ask.

“Well, my daughter thinks it’s a puppy, but I’m fairly certain it’s a baby,” I say with a smile. They usually laugh in return. Then I go ahead and tell them that we don’t know the gender. Surprisingly, the next question is almost always whether or not we found out with Peanut. When I tell them we didn’t find out with her either, there’s always a reaction.

(I won’t go into much detail as to why this is a ridiculous statement. I am still waiting for someone to tell me exactly what ‘plans’ these women are making that I’m not. Ask my husband — I’m Type A all the way, and a bit of a control freak. I’m making the same plans that Finder-Outers are. Stocking the baby’s closet with gender-neutral clothing and choosing a gender-neutral paint color doesn’t make me any less prepared than anyone else. So please, ladies, stop saying this. Its implication is not nice.)

When I get the second, more wistful reaction (‘How do you do it?’), I try, just a little, to change their minds by explaining how Not Knowing feels. Especially since during this pregnancy, the whole Not-Knowing thing feels distinctly different.

Last time, I had a major gut feeling that Peanut was a girl. There was so little question in my mind that I even referred to her as ‘she’ in all of my pregnancy blog entries, barely entertaining the fact she could be a boy. I just knew. When thinking about Peanut’s birth, and the big reveal of the baby that had been in residence the last 9.5 months, I was excited for lots of reasons (well, honestly, I was mostly nervous). But not necessarily to learn the gender; I already felt like I knew.

This time it’s totally different. While I started with a fairly strong sense of ‘boy,’ my gut feeling has wavered over the last 33 weeks. For a month or so I was thinking GIRL loud and clear… and then things changed and I went back to feeling boy. I’ve had dreams about both genders (including one where I had triplets, two boys and a girl, and I gave the boys back and kept the girl).

Basically, I am as clueless as I’ve ever been about Squeak’s gender.

It’s because of this cluelessness that I AM SO FRICKIN’ EXCITED for Squeak to come. I can finally learn who’s been chillin’ in my uterus all this time, kicking the Beezus and Ramonas out of me on the daily.

It’s not normal excitement — it’s excitement on a level rarely experienced by an adult. You wanna know what it feels like? Picture this:

You’re six years old, and it’s the week before Christmas. Your parents have just tucked you into bed and you are so excited you can’t sleep. The tree is decorated and you’re on your best behavior for Santa. Your head is dancing with fantasies about what he might bring.

When I daydream about Squeak’s birth in just a scant few weeks, I feel like that kid at Christmas again. I want to squeal, except people would think I’m weird. But I can’t help it! I am so goddamned excited to meet Squeak that my birth plan includes assigning a nurse to shouting out baby’s gender when Squeak makes his/her entrance. Because last time I had to wait 5 seconds for that information, and it felt like a lifetime.

Would I still be excited if I knew the gender? Probably. But THIS excited? Little-kid-waiting-for-Santa excited? No way. And how often in our adult lives do we get to experience kid-level emotions? Not too often.

Even though the suspense is killing me, it’s killing me in a good way.

I’d make the same decision all over again.