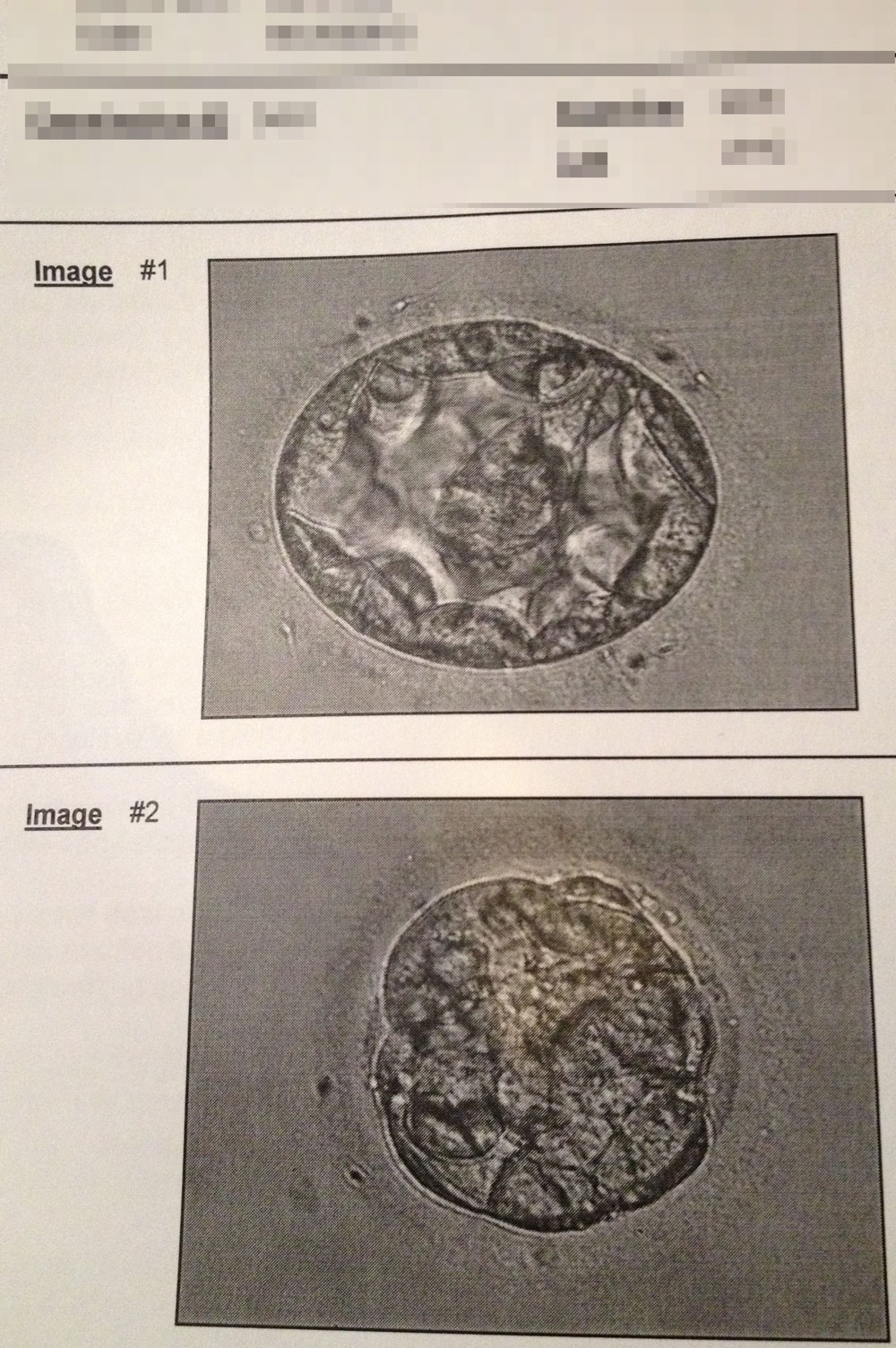 My transfer day didn’t start off well. As I mentioned here, I had planned a couple of things to try and recreate the day of my last frozen embryo transfer, Groundhog Day style. I was being crazy-superstitious, but I didn’t care. I take no chances.

Rather quickly, my plans went down the pooper. The phone rang about 5 minutes before I was scheduled to leave for my massage. It was the massage studio’s manager, letting me know that the therapist had gone home sick and my massage was cancelled. I tried to tell myself “everything happens for a reason.” To make up for the last minute cancellation, she gave me not just a credit for the massage I’d already paid for, but a second freebie too. How nice!

Then my Norah Jones playlist didn’t download from the cloud, because my phone suddenly lost the ability to connect to WiFi. My husband is a grinch about his phone’s data storage, so he resisted downloading the songs onto his phone. I whined and he agreed (begrudgingly) to download the songs if I would just send them to him, which I did, via Dropbox. We were on our way to the transfer when he realized he’d never fetched them from Dropbox. I wanted to cry… but only a little bit. But the more logical part of me figured, oh well… again, maybe this is all happening for a reason. (Luckily he downloaded the songs once we got to the hospital and connected to their WiFi, so it worked out, but only at the last minute!)

The massage and Norah Jones were really the only things that went wrong today, which was pretty awesome. A lot more — and much more important stuff — went well.

(In 2011, when we transferred Peanut, my two pronuclear embryos didn’t even survive the thawing process. We ended up having to thaw two of the 5-day blasts, and Peanut was one of them.)

After we arrived and I changed into my gown and robe, they led us into the procedure room, directly adjacent to the embryo lab. Nurse Dena got me settled onto the bed and had just stepped out to grab a warm blanket (my absolute favorite thing about any hospital procedure) when the embryologist entered. I waited anxiously for her to give us the news. There was a chance that we’d have no viable embryos out of our four remaining.

My nerves quickly turned to delight as she handed me a sheet of paper with photos of two gorgeous embryos. Even a rookie like me could see that these were rockstars.

“We only had to thaw the two pronuclears,” she explained. “They did so well, we didn’t even touch the other two. Look at this top one! I graded it excellent. It really is fantastic.”

I was shocked. This was great news. If, god forbid, this didn’t work, we’d still be able to do another frozen transfer without starting over with a fresh cycle! Good news for our wallet, good news for my body, and good news for my marriage and social life (I was bat-shit insane during the last fresh cycle).

I focused my attention back on the embryo photos in my hand, particularly #1 — The Chosen One. I admired it’s perfectly round edges and organized inner cell mass (qualities only an IVF mother could love, ha ha). I pretended to understand when the embryologist explained what the trophectoderm epithelium was and why it was important. I was still so wowed by the pretty Embryo #1. Take a look! 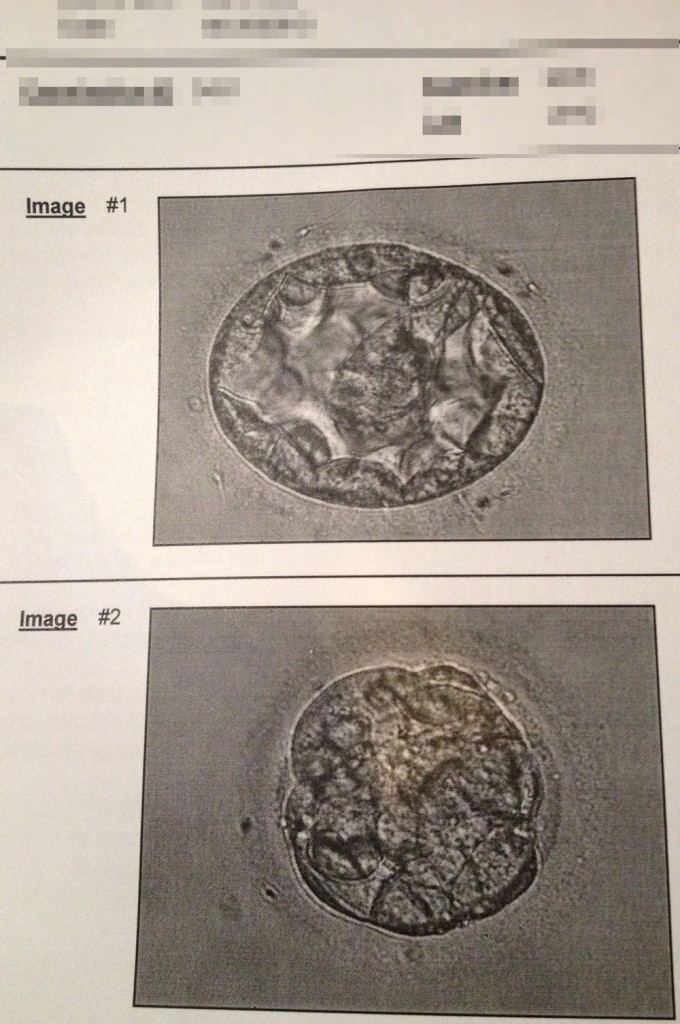 (Embryo #1 has been named, per my other superstition, but I am not sharing the name until after the pregnancy test. If I know this little one is hanging in there, then I will share its name then!)

Now compare this to Peanut’s embryo report from 2011. Peanut was Embryo #4.

(My 2011 frozen transfer embryo report. Embryos 1 through 3 were discarded and #4 became Peanut!)

I asked the embryologist why these two pronuclears had done so well, especially given that the last ones hadn’t. “I pulled your notes from the last frozen transfer, and it’s weird — both pronuclears we thawed last time didn’t make it. But this time, we didn’t need to. I guess these two were just better.”

She explained that the second embryo was in morula stage, just a tinge behind Embryo #1. “How many do you plan to transfer?” she asked.

“One,” my husband and I said in unison. The embryologist smiled. (They really like that answer in the IVF clinic, because it is more likely to lead to a successful pregnancy and a live birth.)

“In that case, we’ll culture this second one out, and if it goes past morula, we’ll refreeze it. You can call the patient message line tomorrow to find out the outcome.” She wished us good luck and went back to the lab to prepare Embryo #1 for transfer.

I couldn’t stop smiling. “I can’t believe it!” I told my husband. “This is nuts!”

I thought for sure we’d spend all four of our remaining embryos for this transfer, because we’d spent four making Peanut. But here we were, with one awesome embryo on deck, and potentially THREE REMAINING! Ahhhh!

I’m not used to the best case scenario when it comes to IVF. After the first try failed and the second try was “Meh, you’re not very pregnant, so don’t get your hopes up,” I’m used to things going badly. This was a pleasant, and frankly amazing, surprise.

P.S. – I’m going to have to give myself the PIO shot tomorrow night — no way around it. Just for practice, I decided to do it myself tonight while my husband was here to back me up, in case I chickened. After some deep breaths, I poked and dammit, I DID IT! The hardest part was getting over the mental block of sticking a needle in your body. Then it’s cake. Speaking of cake, I’m going to have a cupcake now. Later, dude.  Sincerely, Chuck Norris.