Take a deep breath and poke 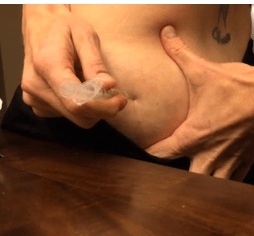 I’ve given myself my PIO shot for four nights straight now. Every time, I feel a little surge of pride when I’m finished. Check me out in mah little video:

The thought of self-administering my shot caused a mini-freakout for months leading up to this cycle (read about my freakout here). I didn’t think I could do it. During my first IVF attempt, despite being in a huge jam, I still couldn’t get up the nerve to give my own shot (let’s all take a moment of silence to remember the Chicago debacle; I sooooo wish I had been braver and could have just done it myself, and maybe it wouldn’t have turned into such a shit show).

I’ll admit, the first time was tough. And for those of you out there who are thinking about giving your own shots, and are doubting yourself, let me tell my story, and hopefully it’ll inspire you a bit.

The process of sticking yourself with a needle has something in common with skydiving. If you’ve never jumped out of a perfectly good airplane, I’ll fill you in.

For me, everything leading up to the actual moment-of-jumping was fine. But as soon as that airplane door opened, and the dude strapped to my back started scooting our butts toward the door, a part of my brain piped up that rarely speaks. The cavewoman part whose only task is to keep your ass alive.

When my brain realized I was about to jump out of the plane, and it went crazy. “YOU ARE NOT JUMPING OUT OF THIS PLANE! Death awaits! Are you insane? You’ll be a dirt pancake! No no no noOOOOOooooooOOO!” it screamed.

My brain’s rant was interrupted by me exiting the plane. I didn’t jump. I was pushed. Because the Cavewoman part of your brain is formidable, I was so terrified that I’d formed a death grip on the door frame. I was pushing back against the instructor, trying futilely to stay in the plane. Luckily, my tandem partner was larger and stronger and he overruled me. Out we went.

I survived the jump of course. But sticking a needle into your body is another activity that brings the Cavewoman to the forefront (and it’s something else you’ll undoubtedly survive).

Standing in the bathroom, syringe in hand, staring at some skin circled in purple marker, and realizing that you need to stick that 1.5-inch needle INTO your body… that’s when the cavewoman speaks up: “Man you have done some stupid things, but this is just nuts. It’s going to hurt. REALLY bad. Can’t someone else do this for you, so we can pretend it’s not happening?”

You’ve no choice — you have to drown her out. Take a deep breath, and just poke. Don’t stab — poke. That sharp little needle will cut a path quite easily, and you’ll be surprised at how much it doesn’t hurt. Seriously! The shots sting when my husband gives them. When I do it, there’s no pain at all.

I feel pressure when the oil goes in, sure. But the actual shot is no big thang. Put your weight on the other leg (if you’re taking your shot on the right, stand on your left), get all alcohol-ed up (I mean alcohol for sterilization, not booze… but man, wouldn’t it be nice if we could have a glass of wine when we do this?!), and just. do. it.

If you need inspiration, follow my lead — tape a picture of Chuck Norris to your bathroom door, so he watches you in the mirror while you do it.

Be Chuck Norris. Or rather, be “a Chuck Norris of infertility.” If I can do it, so can you.