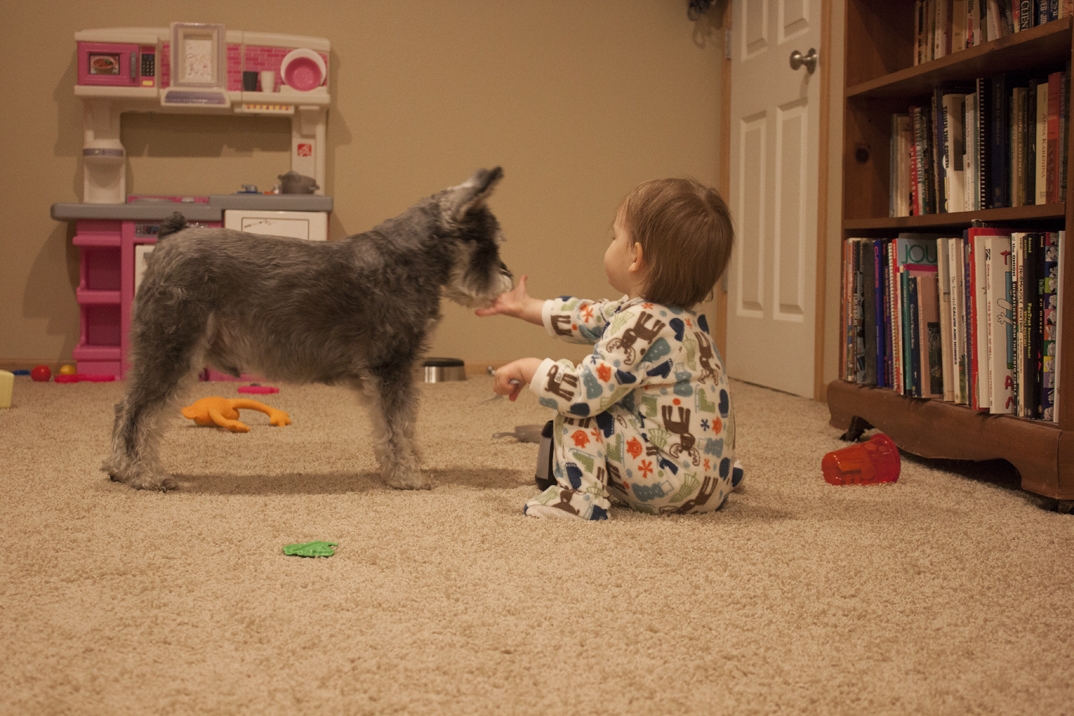 I’ve been amassing a few little stories lately that don’t make for good blog posts on their own, but if I bundle them all together, it works much better. So here you are — the very first set of Peanut Shorts!

Peanut learned something new over the weekend: how to blow kisses. She doesn’t quite get it. She thinks any item placed over her mouth and quickly removed, while saying ‘mwah!’ will do the trick. She uses pot holders, bath toys, the back of her hand, her forearm, and occasionally, her palm. It’s stinkin’ adorable. And comes in handy when I’m recovering from bronchitis and get two frickin’ cold sores, which means no kissing on my baby until they’re gone. Thank goodness for Valtrex. And blowing kisses.

Scene: drawing a bath for Peanut. I’m sitting on the toilet (lid down), bent at the waist, undressing her as she stands at the side of the tub excitedly, trying to climb in. I get her pants off, remove both socks, and pull off her yogurt-covered shirt.

I’m removing the diaper and she’s bouncing up and down in anticipation. I examine the diaper, noting how light it is. “Hmm, Peanut. Is this thing dry?” I ask.

At that very moment I hear the sound of water hitting the floor. Yes, the diaper was dry. The bathroom rug, however, was now covered in pee. 🙂 She’s got comic timing, that Peanut!

Peanut had a cold last week (I’m fairly certain that’s where my bronchitis came from) plus an ear infection. She had a bad cough that came with lots of snot and goopy eyes. One morning as I left for work, she was toddling around the house in her footie pajamas.

“Peanut, can I have a kiss?” I asked, kneeling down to her level. She ran toward me, mouth wide open, ready to deliver her Peanut-style kisses. I had my lips smooched up, ready to receive.

About 4 inches from my face, her little face scrunched up. Without warning, she sneezed right in my face, and snot went flying. My mouth was still open, too.

The aforementioned bronchitis reared its ugly head this past Saturday while I was home alone with Peanut. I was running a 101.6 fever and I was miserable. In total violation of our Rules of Parenting, I turned on the TV. She didn’t veg out and watch it (apparently she isn’t into DIY Network), but it did keep her interested when she was between toys. Don’t tell my husband.

Peanut has just a couple of words she uses consistently: “Mommy” and “Doggy.” (On rare occasions she’ll pull out ‘ball’ or ‘puppy’.) We sometimes go to the community library to check out books, and Peanut’s favorite thing to do there is to watch the two guinea pigs that live in the library. The building is new and has high ceilings and concrete floors, so it’s super echo-y.

Unfortunately this only serves to amplify Peanut’s major misconception about life right now: that all living things are doggies. I carry her over to the guinea pig enclosure and the moment she spots them, she yells out “DOGGY!” at the top of her lungs. I shush her, but she usually continues unfazed with her very loud insistence that she, and she alone, knows the truth about the guinea pigs. They are really dogs.

Last week, I was home alone for several days while my husband traveled for his work. One of those nights, Peanut woke up at 12:40am screaming bloody murder. I let her cry for a little bit, then went in to soothe her back to sleep. She was squirmy and agitated, and after 5 minutes of attempted snuggles, I put her back in the crib to cry it out. She fell asleep quickly, but only for 15 minutes and was back at it again. I gave up and brought her into bed with me, where she popped a thumb in her mouth and fell fast asleep. We both slept from 1am until almost 6am, when she started tossing and turning. During one of her readjustments, she let out a series of punchy farts, topped off by one long and very loud toot at the end. I had to stifle a laugh so she wouldn’t wake up.

As mentioned, my husband was gone for several days, and at the same time, I was sick. This meant I would wake a lot, coughing, in the middle of the night. One night I lay awake at 3:50am, staring at the ceiling and wishing I could get back to sleep, when I heard a huge crash from the other side of the house. The garage, maybe the basement — I couldn’t tell.

As opposed to letting the burglar come to me, I decided to investigate (but first grabbed a giant butcher knife from the kitchen). I opened the door to the garage, stabbing the air with my knife, but it was empty. Same with the backyard, and the rest of the upstairs. I crept downstairs, knife still in hand, and discovered that a shelf full of paint cans had collapsed in the storage room.

I’ve lived here over 5 years, and that shelf’s been in place for 4-1/2. Of all the times for that goddamn shelf to give way, it had to do so in the middle of the night, on a rare night when I am actually awake, and on a night that my husband was out of town. What are the chances?! :-/