Why I Hate Shopping for Baby Clothes 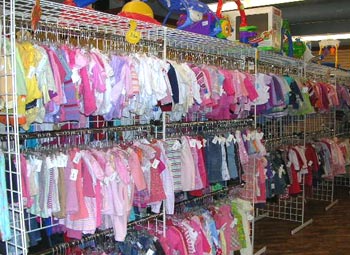 I can’t stand shopping for baby clothes for my little Peanut. I get really frustrated every time I step into the baby girl department, no matter where I go. Target, Kohl’s, JCPenney, Younkers… the same problems at every one.

What exactly is driving me crazy? Let me elaborate.

Fuchsia, salmon, magenta, hot pink, mauve, rose, puce.  One overwhelming color for the entire section. Traditionally*, baby blue is for boys while pink is for girls (or so I thought). But the boys’ section doesn’t look like it’s been hosed down with Berry Blue Kool-Aid, while the girls looks like it’s been hosed down with Pepto Bismol. Why are we limited to one primary color while they get to enjoy royal blue, navy, red, white, beige, black, purple, and then some? I’m not saying nothing can be pink. A little pink is fine. But I would like a little more variety. Particularly purple; it’s my favorite color. 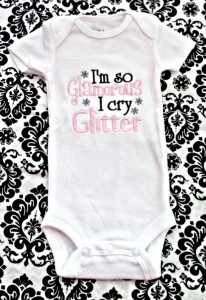 (All that is wrong with little girls’ clothing: Exhibit A.)

2. They all have WORDS on them.

I saw a green bodysuit with a turtle on it at JCPenney last month. It was lying haphazardly on a pile of skirts, all alone. There was just one, and no empty slot where they used to be. It was a glorious mystery, as if I’d been visited by the unique clothing fairy. A bodysuit for an infant girl without words on it is so unusual that I had to have it. The other onesies featured ginormous print on the front, relaying little ditties like “CUTE AS CAN BE”  “I NEED SOME GRANDMA TIME”  “I’M SWEET ON YOU”  and “WHAT’S NOT TO LOVE?”  Seriously, why must our baby girls’ clothes say something? Can’t the baby in the clothes speak for herself? (Perhaps if I had an ugly baby I’d want to distract people from her face, but I don’t.) 😀 (kidding, kidding)

3.  They tend to make little girls look like tiny hookers.

This is more of an issue when you start shopping in the little girls section rather than the Baby. Explain to me why a toddler needs an outfit with a simulated bra strap peeking out of the neck hole. Sequined leggings. Shirts with giant necklaces built into the design. Yuck. I don’t think babies need to wear tiny versions of grown-up clothes. They aren’t tiny grown-ups. They’re babies. Let them dress like babies, during the few years of their life when they don’t care whether or not they look attractive.

(I’m already grossed out by the tiny bras next to the Dora the Explorer panties. We have somehow taken a wrong turn if age 8 puberty is the norm now. It wasn’t just a few generations ago. But that’s a topic for another blog.)

Whoever decided to put buttons — not snaps, but buttons — on the back of an outfit for a 9-month-old has obviously never had a 9-month-old. She’s so squirmy that I have acquired a new skill:  putting a diaper on her as she crawls. I look at some of the little button-covered ensembles and think, “That’s cute for a photo shoot. But that’s about it.”  Given the amount of impractical outfits for sale, I can only guess that lots of parents are putting those outfits on their kids for everyday use. I don’t wear a sequined skirt to mow the lawn. Why would your crawling baby need to wear ruffle-covered leggings while she crawls around on the floor at daycare?

The pink is one thing — but even more difficult is finding an outfit that’s not festooned in one or a hundred of the following:

At what point did we decide these arbitrary objects were limited only to boys or girls clothing? I loved the dinosaur unit in Kindergarten, and would have adored a shirt with a Brontosaurus on it. I like turtles because they’re an animal seldom seen on girls’ clothing. Same with monkeys and bears.

On the topic of unfairness in clothing options, don’t get me started on superhero stuff for girls. Or lack thereof. We’ve searched for Batman gear for Peanut since she was born. To dress my baby in a Batman Tshirt or Thor underpants, I’m stuck buying from the boys’ section. (Trust me, once you’ve seen Eric Hemsworth, any girl would be okay having him in her underpants, tee hee… I’m kidding, I’m kidding!)

Yes, I’m projecting my clothing preferences on my daughter. I own no ruffles, nor sequins, and there’s sure as hell no kittens on my clothing. If I’m not super-girly, she doesn’t need to be either. But the choices are so few, it’s impossible to avoid the ruffly-sequiny-bow-and-word-covered drivel.

I’m sure clothes exist outside the pink-smothered norm. If you know of some affordable options, point me in that direction! Maybe that’s where I go wrong — I’m not willing to spend. But for something she’ll outgrow quickly, I refuse to spend a fortune. BabyGap is a BabyRipOff.

To the makers of baby girl clothing: If you insist on words, let’s pick something a bit more dignified. “MY BOOKSHELF IS BIGGER THAN YOUR TOYBOX” or “I’VE LISTENED TO NPR SINCE CONCEPTION” (Yep, that one exists. It’s awesome.)

I’m dressing her like me, in essence, which is fine for now. When she’s older and can assert her own opinions, she’s free to drench herself head to toe in magenta and sequins (I won’t like it, but she’s free to be her own person).

And maybe I’ll get to a point that I actually enjoy shopping. Probably when I’m paying for the clothes instead of picking them out.

P.S. – Want to know more about this topic? I sure did, and I found a great, research-based book about it: Cinderella Ate My Daughter.  I always felt like this girly-girl crap was way over the top and much different now versus when I was little. Now I have proof of it!  YOU. MUST. READ.

*Guess what I learned when reading the above-mentioned Cinderella Ate My Daughter book? That blue was the little girl color and pink was the boy color back at the turn of the century. Why? Because pink is a shade of red, which signified strength. Strength = boy. Blue was the girl color, which is why Sleeping Beauty and Snow White’s gowns are BLUE. Wild huh?