When it’s okay to ignore 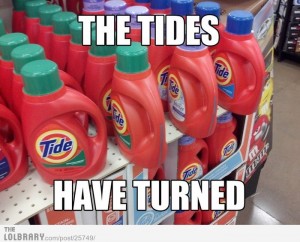 This made me giggle.

I’ve always said if I found myself on the other end of the infertility situation, I’d be understanding and empathetic. Now that my pregnancy is over and my baby girl has arrived, I find myself there.

When I was about 20 weeks along, a friend let it slip that she and her husband had pulled the goalie. They’d never been particularly excited about having kids, but were in their late 30s, and I think they decided to let fate make the decision. She made an off-hand comment that stuck with me, however. She mentioned that they’d pulled the goalie several months earlier and nothing had happened yet, and she was starting to wonder if she was able to get pregnant (ha ha). The nervous laugh at the end of her statement was intended to prove that she didn’t really care so much… but I suspected there was more emotion under those words than she let on.

I understand that feeling. As a woman, you spend your entire sexually active years — your late teens and most of your 20s — trying quite hard not to get pregnant. So when you look to your reproductive organs to do their job for the first time ever and they fail you, it’s quite a blow to the psyche. I am woman, watch me reproduce!

I thought I could do this, but I guess I can’t. What the hell?!

Fast forward to the birth of our little one a few weeks ago. When our Facebook walls were blowing up with well wishes and comments, one voice was noticeably absent: my still-trying, still-not-pregnant friend.

No comments, no phone calls, no emails, no text messages.

I was only slighted a bit, because I fully understood what she was feeling. I blogged about it when I reached that point. I wasn’t proud of it, but I couldn’t take seeing my friends’ pregnancy announcements and baby pictures when I was going through the pain of infertility.

Unfortunately, I am still feeling the fallout of my decision to hide a handful of gushy new moms from my Facebook newsfeed last year. Some folks are still angry (startlingly so), and think (or thought) I should have been able to “get over it” and gush and coo over their new addition regardless of what I was feeling. They mistook my decision to hide them as a personal insult, but they were dead wrong. Ignoring someone’s new baby, for a woman who is trying and failing to get pregnant, isn’t about the new mother at all.

I might be way off base about my friend. Maybe she is on a Facebook vacation. Maybe she hates babies. Maybe she has another perfectly good reason for not acknowledging Peanut’s birth.

But if my hunch is correct, she’s feeling what I felt. And the least I can do, as a formerly infertile girl who came out the other end with a daughter, is to be forgiving and understanding of her pain. Do I want people to love and gush over my baby? Of course I do. But I must be understanding if a friend is not ready to — or simply can’t — love her the way I’d like.

The way others were not understanding when I was in her shoes.