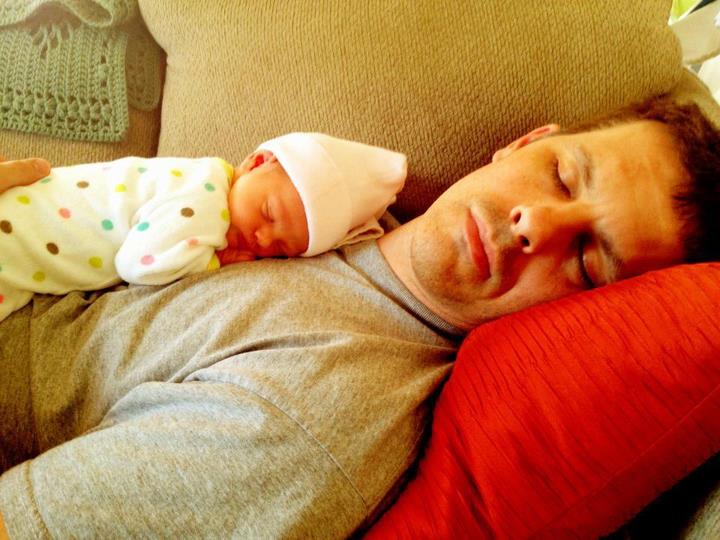 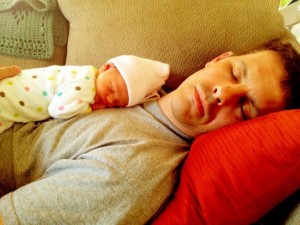 One of my daughter’s favorite sleeping spots is square in the middle of my husband’s chest.

I find the two of them in this position at least once a day; usually early morning or late in the evening as he soothes her to sleep for bedtime. It’s beautiful, honestly. To see this tiny person, all floppy limbs and pig squeaks, sprawled out on her Daddy’s chest… it’s impossible to explain, but beautiful is the best word I can summon to describe the scene.

The daddy/daughter scene is made all the more lovable by this fact: my husband never wanted children.

When we met, he was staunchly anti-kiddo. At that point in my life, I had been in no relationship longer than 8 months, and there was nothing about my unstable life that seemed in line with parenting. So I agreed I could live without having children. It seemed plausible at the time.

A year later, we had moved in together and our happy domestication was working well. Suddenly I realized that if I stayed with this man, I would most definitely want a child of my own. Maybe two.

He was upset when I told him about my change of heart, complaining that I’d pulled a bait-and-switch. But none of us can say with certainty how we’ll feel at a future date and time. No one promises “’til death do us part” without fully believing his or her marriage will go the distance (okay, some people do, but they’re idiots getting married for all the wrong reasons). And while I meant it when I said I could do without having kids, once my circumstances changed, I realized I wouldn’t feel that way forever.

My husband, to his credit, compromised. He said, “I love you. So if this is a deal-breaker, and you want a child, I’ll suck it up and go along. But I won’t like it. And only ONE kid, that’s it.”

I wasn’t totally pleased, but was willing to take what I could get. I love my husband and wanted to compromise, too. Besides, one is better than none.

What was hard about this agreement is that it didn’t change the way my husband felt about having kids. Just because he’d agreed to one didn’t cause him to have a change of heart and suddenly get excited about the idea. He still made snide comments in reference to childless couples (“They aren’t having kids. Those are some smart people right there.”) and poked fun at my efforts to get pregnant early on (“Why are we rushing this? Do you actually want the end of our lives as we know them to come sooner?”).

I would get angry and we fought nearly every time he inserted one of his anti-baby remarks. But my therapist reminded me: he’d agreed to have a baby with me, and that would have to be good enough. I had no right to ask him to have a baby with me and to be excited and looking forward to it. After all, having kids is something he had never wanted, and had spent almost 40 years disdaining. The fact he was going to do it now, just because he loved me, was a wonderful thing. I had no right to ask for more from him.

Two years ago, I called a former friend to vent about my husband and his anti-baby comments. My friend lost her self-control and all these pent-up feelings about him came spilling out (none of which were good). At the top of her list of complaints was the fact that he didn’t want children. “You deserve a husband who wants kids!” she said emphatically.

I believed her momentarily, but eventually reality returned. After all, I’d been on the receiving end of many of her calls, complaining about her own husband’s lack of help around the house and general slacking on childcare. I wasn’t sure she had any room to talk.

What this has to do with that tender Daddy/Daughter moment is this: True, my husband did not want kids. Even in the delivery room he was cracking jokes about the impending doom of parenthood. But as soon as she arrived, he went from “A Guy Who Doesn’t Want Kids” to “A Guy Who Still Doesn’t Want Kids But Will Walk Through Fire for His Daughter.”

Case in point: my husband takes at least one, sometimes two, middle-of-the-night feedings so I can sleep. When I get up to feed her and to pump, he gets up with me and changes her diaper while I get a bottle ready. Regularly, he shoos me out of the house and stays home with Peanut, so I can have some “me time.”

He never shies away from a poopy diaper, and when we both got squirted with pee a few nights ago, he didn’t even flinch (instead we laughed hysterically). He bathes her expertly, feeds her, dances with her, reads Goodnight Moon to her, and has a Spotify playlist of soothing music called “Baby” that he plays for her.

In the green glow of our bedroom night-light, I catch him tiptoeing to the bassinet in the wee hours. He lays a hand on her in the darkness, checking that our silent sleeper is still breathing. And at the pediatrician’s office, he peppered the doctor with so many questions ( “How many layers should we put her in at bedtime?” “Does that little blister on her top lip hurt her?” “What should we do when she gets the hiccups?”), I had to step in and stop him so the doc could tend to his other patients.

He sings Peanut silly made-up songs, kisses her constantly, and complains if I hog her and cut into his Peanut cuddle time. I overheard him on the phone with one of his best friends, describing the strange new feeling of protectiveness he was experiencing: “As soon as she was born, I knew – just knew – that if anyone ever hurt her, I would fucking kill them. I would honest-to-god kill them, and in the most painful way I could think of. It’s insane, man. I had no idea I would feel this way.”

Basically, my husband loves Peanut. And I’ve realized in the three weeks since she was born that wanting children (or not wanting them) isn’t important. What is important is how you behave once you have them.

And in this regard, my former best friend couldn’t have been more wrong about my husband. I’ll take a Reluctant-Turned-Rockstar Daddy like mine over a Wants-Kids-But-Only-If-Someone-Else-Raises-Them Dad any day. 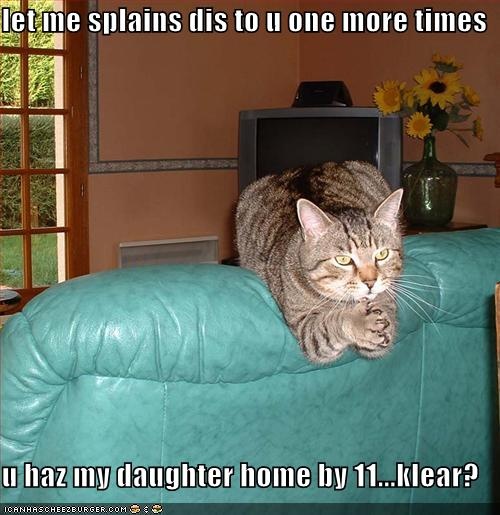