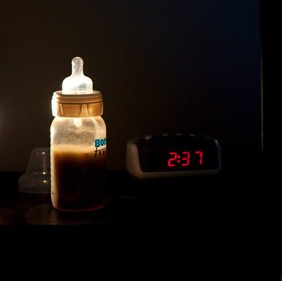 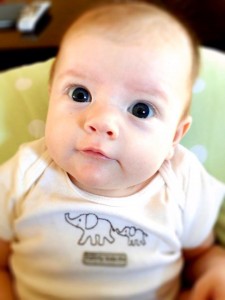 I know that all parents honestly believe their baby is the cutest one in the world, but come on, people… let’s not kid ourselves. It’s clear that we have a winner in the cuteness contest. 🙂

“So what’s the most surprising part of being a parent?”

I get asked this fairly regularly – about once every two weeks, by both veteran parents and swingin’ singles.

My answer is always the same:  “That the sleep deprivation isn’t as bad as predicted. And I was surprised to find that I don’t resent her at all.”

We received many dire predictions from our parent friends before Peanut arrived. Particularly about the lack of sleep (which scared me to death, honestly). I am a big fan of sleep. My husband has always been a super-light sleeper, but me? I could snooze through the apocalypse.

I won’t lie – the first few weeks were hard. I didn’t get more than 3 hours of sleep at a stretch, even when my husband took one of the night feedings (because I had to get up to pump anyway).

When the baby would start to cry, I’d stumble out of bed, shaking the cobwebs from my brain. I’d lift her from her crib and deftly change her diaper in the dark (I got good at that pretty quickly). We’d walk out to the living room sofa together, and I’d lift her onto her side on the Boppy pillow and situate myself to feed her. She sleepily latched on and I’d flip open the iPad and read the news, play Bejeweled, or check Facebook while she nursed. I fought to keep my eyes open until she was finished, when I’d burp her and rock her for a few minutes before ever-so-carefully placing her, sound asleep, back in her crib. About 2-1/2 to 3 hours later, we’d repeat the process.

I should have been a zombie. But I wasn’t. It was a different kind of sleep deprivation. I wasn’t a POW in a Japanese prison camp, being kept from sleep by evil men with sinister motives. I was tired because my baby needed to be fed, cuddled, and loved. And I was happy to sacrifice a little shut-eye.

I’ll say this though – the female body is an amazing machine. I found that I adapted to this new sleep routine and it became the new normal very quickly. I did get really tired around 5pm every day, and when I could, I’d take a nap. But many days it just didn’t work out for me to nap. I’d go to bed around 9pm and we’d do it all over again that night. But it didn’t kill me. I got through it just fine.

One key to my survival was my husband’s help. As I mentioned before, he took one of the night feedings, sometimes two, especially early on. It was the only way I was able to get any significant sleep, and I’m lucky I have a husband who doesn’t mind getting up to help out.

At Baby Care class, the teacher went around the room asking who was going to handle middle-of-the-night feedings. All of us women planned to breastfeed, but my husband and I were the only couple who planned to introduce a bottle early on so Dad could share the night feeding responsibility. I hope by now all those women have changed their tune. Putting the full burden of night feedings on the mother isn’t necessary, and hopefully Dad stepped up and decided to take one for the team.

(Sometimes baby won’t take a bottle, so Mom is stuck doing the honors on her own. But if the kiddo will accept a bottle, let Dad take a turn getting up at 3am, moms! It’s good for your sanity and keeps resentment toward your spouse at bay.)

Now that I am back to work, and Peanut is 12 weeks old, our routine’s different. She has moved from 3 feedings per night down to 1 (thank goodness). It’s a rare night that she eats twice. She’s had one 8 hour and 45 minute sleep stretch, a fluke, but most nights she does 5 to 6 hours straight, with random 7-hour nights starting to appear here and there. And after she eats, she goes right back to sleep.

I’m blessed with a good sleeper, and I don’t take that for granted. I also know there are curve-busting babies out there that start sleeping 9 hours straight at 4 weeks… and I don’t want to read about them on my Facebook feed every day, so sorry if I hid your updates temporarily until my kiddo catches up. I don’t like feeling as if my baby is behind the curve. 🙂

My regular Baby Sleep Update statuses on Facebook are probably irritating some people — “6 and a half hours straight! Good girl!” or “Holy crap, up at midnight, 3am and 5am last night, I am exhausted!” – but sleep is a pretty big deal. Along with food and shelter, it’s right up at the top of the Human Needs list – so when you’re getting very little, it tends to consume your mind.

But even when all you can think about is getting 2 straight hours of sleep, it’s still not so bad. When you pick up that squirming baby from her crib, and feel her tiny body relax against your chest, you realize something.

In the words of Conway Twitty, “That’s my job, you see.”

(Beware of the link above. That song makes me cry every time.)