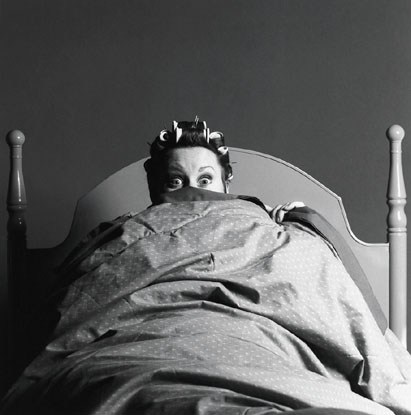 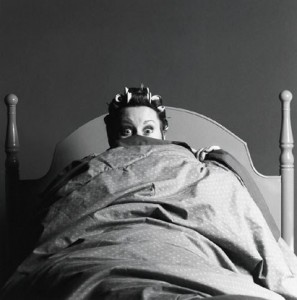 Night terror: also known as a sleep terror or pavor nocturnus, is a parasomnia disorder, causing feelings of terror or dread, and typically occurring in the first few hours of sleep during stage 3 or 4 non-rapid eye movement NREM sleep.

An estimated 1% to 6% of children — and fewer than 1% of adults — will experience a night terror within their lifetime. Sleep terrors begin between ages 3 and 12 years and then usually dissipate during adolescence. In adults they most commonly occur between the ages of 20 to 30.

Mine began when I was 29 – specifically, in April. One of the first night terrors happened when I was sleeping in an unfamiliar bed.

The morning of April 24th, while on my way to work, my mother called to say that my grandpa had suffered a massive stroke; the entire family needed to come quickly.

I packed a bag and drove two hours to my hometown, where we spent a tearful day at the hospital, rotating shifts by his bed, until nearly everyone had been by to see him. He was still hanging on that night, so Grandma sent my sisters and me back to her house to get some sleep. She and my mother stayed with Grandpa.

That night at Grandma’s, I shared a bed with one of my sisters. I fell asleep, and the next thing I remember, I was sitting up in bed, clawing at my sister’s legs under the comforter. She said my name over and over until I finally turned toward her. “What are you doing?” she asked, puzzled. The fog slowly lifted, I remembered where I was, and I realized: I had no idea what I was doing. Gradually I remembered that I’d been convinced her feet were my dog, smothering to death under the blanket. But my dog was 130 miles away.

Night terrors are like that. They rarely make sense. No matter how much I tell myself ‘This is not happening,’ they cherry-pick my greatest fears and make them real for several terrifying seconds every night. And when I say “real,” I mean real. In the midst of a night terror, I essentially hallucinate.

I reach out in the dark, searching for something in my panicked state, and my hands will find a small pillow, but I don’t feel a pillow. In my mind, when I’m having a night terror about my smothering dog, I don’t feel smooth fabric. I feel the cold fur of a dead dog. My brain tells me I’m raking my fingers through a half-inch of schnauzer scruff, and the pillow’s square shape becomes a rounded dog’s body. As I come out of it, the texture changes abruptly from fur to pillowcase, and the solid dog I thought I felt becomes a squishy pile of cotton batting. I wonder how I ever thought it felt like fur, or like my dog’s sturdy little abdomen. It’s obviously a pillow. There’s no mistaking it.

But perception, as they say, is reality. Your world is only as sharp or as awful as your brain interprets. Late in the night, my brain takes signals from my fingertips, but they don’t translate correctly. A pillow becomes a dog, or more recently — and more horrifying — dog fur becomes smooth baby skin.

Since the birth of my daughter, the night terrors have had a single theme:  Baby in the bed, smothered to death, cold and blue and not breathing. They started the first night she was home, despite her being safely in a bassinet. We weren’t even co-sleeping; she was completely separate from our bed in her own warm cocoon. But the night terrors persisted. They’re directly correlated with my stress level, and they continue like clockwork nearly every night.

Night terrors, for me, work like this:  I awaken with a start (some people awake screaming, but I’m a silent waker), and I know, just know, that something is horribly wrong. I just need to figure out what it is. I feel around me on the bed, and as soon as my hands land on something, my brain turns it into the baby. I frantically try to free her from the blanket that’s over her face, or roll her onto her back (sometimes I get convinced she’s face down on the mattress). But in just a few seconds, the “baby” dissolves under my hands, and I’m left having “rescued” a handful of the sheet.

I instituted a No Baby in The Bed rule for this reason. Though it doesn’t keep away the night terrors completely, it’s at least a small comfort to know that my night terror cannot be real, because the baby will never, ever be in the bed in the middle of the night.

If she’s fussy, one of us takes her to the living room and sleeps in the recliner with her on our chest (it’s unfair to call this “sleep” – both of us are so paranoid about her smothering that it usually amounts to a light nap at best). When Peanut wakes in the middle of the night to eat, I take her out to the sofa to nurse.

Infant death by smothering is in the news a lot, especially the parent-related news stories I read on Huffington Post Parents. I can’t imagine the agony of knowing that your child smothered while lying next to you. To me, it must be akin to forgetting your child in a hot car. In an article I read about hot car deaths, one scene stuck with me: a father, walking to his car at the end of a workday, who saw his car surrounded by police. They were breaking the window to get to his now-deceased baby. The father ran up to the car, saw what he had done, and grabbed the gun of the nearest officer to shoot himself in the head. He didn’t succeed, but now that I’m a parent, I can understand what he must have been feeling at that moment. Agony of the worst kind: visceral, primal, and searing. I don’t blame him for trying. I get a very small taste of that agony every night, and it’s horrible.

When she gets older and stronger, perhaps we’ll let her into our bed when the need arises. I was terrified of thunderstorms as a youngster, and used to climb into my parents’ bed for security when the thunder and lightning came. They booted me out quickly (jerks) but if Peanut is afraid, I’ll snuggle her and keep her safe from the storm.  But not yet. She’s too little.

As far as what causes my night terrors, I’m pretty certain they are tied to my antidepressant medication, because I don’t remember having them during my pregnancy (when I was off my meds). But there are too many positives to quit taking it for this one negative side effect. Meditating before bed sometimes helps. I’ve put a night light in our room. We use a white noise machine. But I’ve run out of ideas to keep them at bay.

For now, I’ll resign myself to the fact that the most terrifying things live in the darkness.