I’m right at that stage where I’m beginning to look actually pregnant, rather than looking like I’ve added a spare tire to my midsection. I scope out my belly every morning before getting in the shower. It’s definitely poking out something fierce.

Friday night I went to the mall to pick up a few things. The mall was packed with shoppers, and as I walked from JCPenney to Target, I had a flashback: me, about six months ago, just after the IVF fresh cycle failed. I was visiting the mall on a similarly busy night, and as I looked around the throng of people, there were pregnant bellies everywhere. I couldn’t swing a dead cat without hitting a woman who was knocked up.

I kept my head down as I walked from store to store, because I was afraid my face would betray the sadness, anger, and bitterness swirling through my head. I hated being there, surrounded by those women who had what I wanted — a big, pregnant belly. I couldn’t help thinking that it was so easy for all of them… why was it so hard for me? It wasn’t fair.

Back to the present. Friday night was my first trip to the mall since my own pregnant belly had come out to play. It was a strange mix of two feelings — happiness that I was “one of the belly women,” but below that was a sense of shame… here I was, flaunting something while walking among infertile women, any number of which were shooting mental daggers at me just as I had done months earlier.

I wished there was a way to sport my belly proudly while also giving hope to the silent infertiles who were passing me like ships in the night. I wish I owned a screenprinting business, because I’d make my own shirt. It would explain the source of my belly and give a little hope to those who were in the middle of their own fight for a baby.

I’d make sure that the women who are walking around the mall today, feeling what I felt a few months ago, understand that we didn’t all get our bumps by accident. Some of us have to work for it, and there are success stories all around you. Keep the faith. It’ll happen for you, too. 🙂 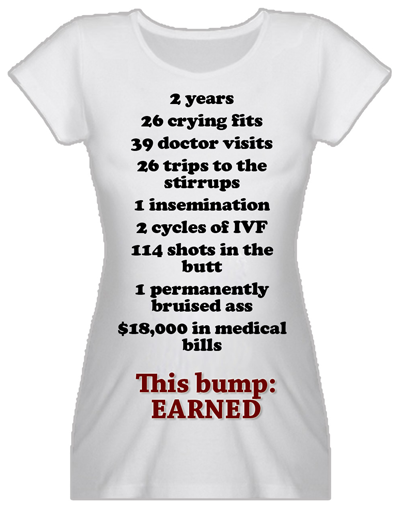 This is my shirt. Print it up.