“Did you try putting your legs in the air?” 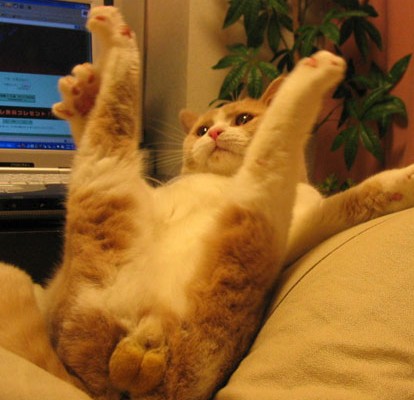 Ah, another gem for the “Captain Obvious” category. I can’t even count how many people told me this over the last year and a half.

What’s gross about this one:  now I know this person is picturing me naked. Ew.

But this piece of advice is particularly irritating to women with fertility issues. If you are dealing with male infertility — which means his swimmers watch Michael Phelps and think, “Okay, HOW the HELL does he swim in a straight line?! It’s soooo hard!” — it doesn’t matter how much of a head start you give them. They’ll still be bumping into things, getting lost, swimming sideways, stopping to ask other sperm for directions, and by the time they get pointed toward the fallopes, they drop dead. Nice job, idiot sperm.

Putting your legs in the air after sex, when you’re trying to get pregnant, is right up there with arranging deck chairs on the Titanic. It might make you feel better, and will make the deck look orderly, but it won’t be the big thing that makes a difference.