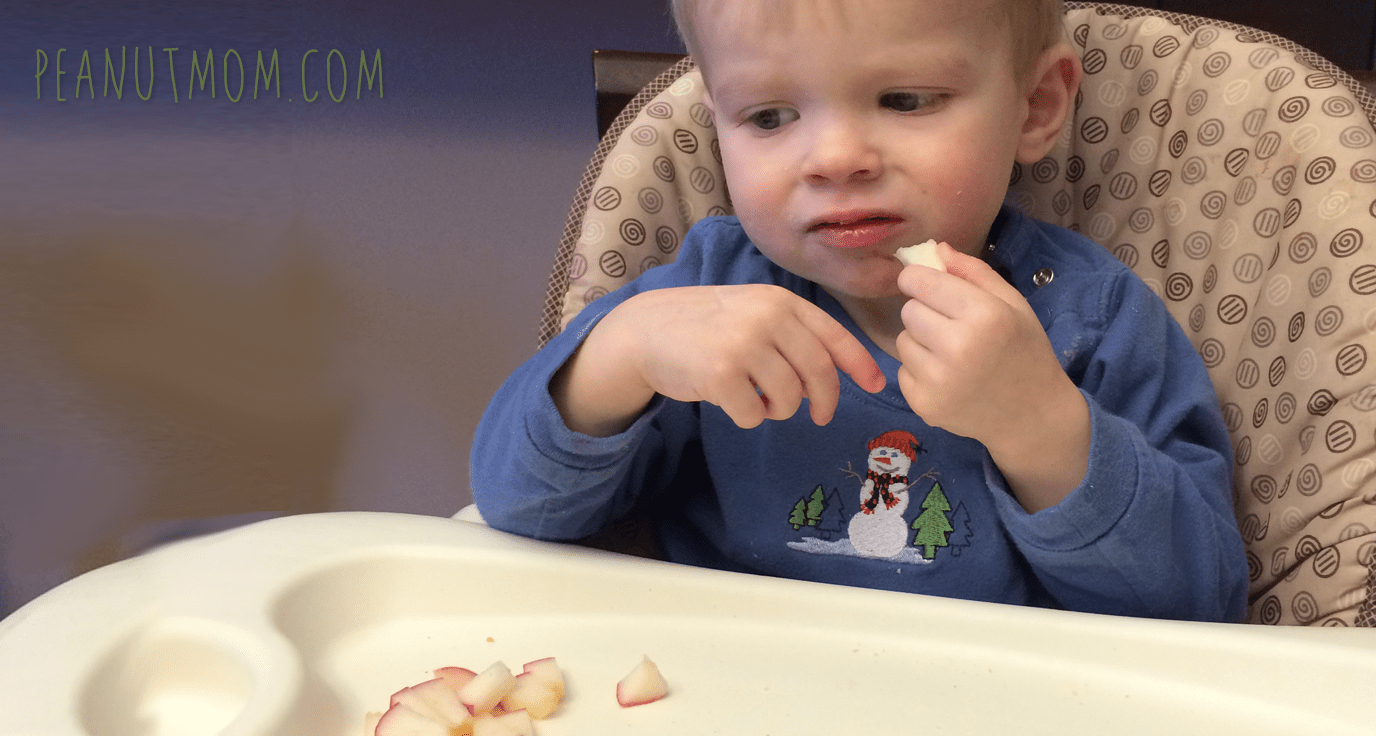 This is part 4 of a series about my kids’ picky eating and visits to a feeding specialist. You might want to catch up first on Part 1, Part 2, and Part 3.

Squeak’s first visit to the feeding specialist was delayed by over a month, thanks to his hospital stay for pneumonia and a virus in early February. We had to cancel and reschedule, so it was late March before the two of us sauntered in for his first visit to Food Camp, aka “The Doctor Restaurant.”

I had been nervous about this appointment ever since Peanut’s visit, where I walked out emotionally drained, with cottage cheese in my hair, fully terrified of what would come next.

To my surprise, Peanut had been doing pretty well with her “food touches” over the past two and a half months. She didn’t accept the challenge every night, and we didn’t have a “challenge food” to offer every night (the part where you need a residue or sauce of some sort makes it challenging… when I make myself a ham and cheese omelette, there isn’t much for her to taste after she touches it to her lips, you know?), but when we did, 85% of the time, she’d get it done.

Peanut didn’t complete her 3 touches during the meal. Instead, she’d finish her meal and wait for the timer to go off (another of Doctor C’s suggestions), then climb down and play a while. She’d return to the table 20 minutes later declaring, “Okay I’m ready for my challenge food now!” We’d happily oblige, doing the touches for her or letting her do it herself (she prefers us to do the touching most of the time).

That said, when Squeak was in the hospital and in the immediate aftermath of recovering from the insanity of it, we didn’t do any challenge foods. Shortly after, Peanut got sick with a virus that gave her a fever for 6 days, so she barely ate anything at all. One day after that fever finally broke, she got a herpes infection that made her entire mouth bleed like crazy every time she ate anything that wasn’t pudding or applesauce, poor thing.

(I have suffered from cold sores since I was a kid; just a few weeks earlier, I’d had an outbreak. Peanut stole my water bottle from my bedside table and drank from it before I could stop her. The first time you have an infection, it manifests as 7 to 10 days of extreme pain in the mouth and sores on the tongue. Here forward, an outbreak will be a typical cold sore. I feel so bad for her; cold sores were the bane of my existence growing up. I had one in pretty much every school picture, until anti-virals became available. She can take them when she’s 12, but until then, she’s at the mercy of the virus and can only use Abreva [which never does a damn thing for me]. I feel so bad for her, and so guilty. I can’t believe I gave my baby a stupid virus she’ll never get rid of. That said… I don’t get pissed at my mom every time I get a cold sore, so Peanut probably won’t hold it against me. I hope. Sorry, sweetheart.)

In short, we’d fallen off the Challenge Food horse. It was made more difficult by the fact that my husband Nathan pretty much refuses (or in his words, “forgets”) to give challenge foods. He says he can’t think of anything, or he doesn’t remember, or it’s too hard, or it will take too long. It’s frustrating. This isn’t easy, trying to change your child’s eating habits. And it’s even harder when you feel like you’re doing it alone, which I do.

On the day of Squeak’s visit, I dressed in scrubby clothes, fully prepared to get sprinkled with food. I packed a cooler with two foods he liked (blueberry muffin, chicken nuggets) and two foods he didn’t (mandarin oranges, cottage cheese). This time, we had a big group of folks in the room. One speech and language pathologist, who would be watching him chew and swallow, plus a student who was observing. A medical resident on a pediatric psych rotation; a medical student, and of course, Dr. C herself.

Squeak immediately sat down to play with cars while we ran through the history and his current eating patterns and habits. Then it was go time. We asked Squeak if he wanted some food and he started to climb up into the high chair all on his own.

I steeled myself for what was about to happen.

Dr. C instructed me to break off a few pieces of muffin and a few pieces of chicken nugget, and to get a little bit of cottage cheese on a spoon. When Squeak was settled in the chair, I asked if he wanted muffin or nugget, and he pointed to the nugget and signed ‘Please’ (proud mom moment, right there). Dr. C was really happy to see that he signed. It would make the next part easier, she said.

After he gobbled down a bite of muffin and one of chicken nugget, he looked expectantly at me for more. Dr. C leaned into his line of sight.

“Do you want more?” she asked him.

He signed ‘more’, tapping his fingertips together.

“Okay then, touch your lips,” she said matter of factly, picking up the spoon of cottage cheese and bringing it toward his mouth. I braced myself.

He started to flail his arms, and shake his head side to side.

I leaned in and put my arm across his forearms, temporarily blocking his ability to knock away the spoon. On one of his shakes, Dr. C wiped his mouth with the spoon and triumphantly declared, “There! You did it! Good job! Here’s some more muffin!”

He quickly realized that the spoon assault was over and licked his lips, which were covered in white cottage cheese sauce. Eureka! He ate the muffin piece and signed ‘more’ again.

I placed a bit of nugget on his tray. He gobbled it down, and signed ‘more’ again.

To my utter amazement, Squeak’s arms stayed on his tray, and he raised his chin toward the doctor and her spoon. She touched it to his lips, he licked them, and looked expectantly at me for more muffin.

I followed her steps exactly, and the same thing happened. Squeak volunteered his lips for the food touches, without an ounce of protest. I couldn’t believe it.

Dr. C came back and smiled. “I needed to be sure it wasn’t just me he would cooperate for. Looks like he’s got this, doesn’t he?”

I nodded, still in disbelief of what I was seeing.

Squeak continued to offer his lips until the muffin and the chicken nuggets were completely gone. We alternated between the mandarin oranges and cottage cheese for his food touches, and when he was done eating, he raised his hands up and signed ‘all done.’

As I watched him dominate the process, I couldn’t help but think: We should have started this with Peanut when she was much, much younger. It was so much easier with him! I didn’t have a bit of cottage cheese in my hair, and my clothes were food-free as well. So much better than Peanut’s visit.

Dr. C also gave me some advice on dealing with food throwing. It’s one of our biggest issues with Squeak, and one we haven’t been able to stop in over a year. When a new or unwanted food would be on his tray, or when he was done eating, he’d just throw it on the floor, where the dog would happily gobble it up. Stern scolding and the like didn’t work. The dog’s lightning-quick cleanup job meant we couldn’t put it back, either. But luckily, Dr. C had a solution.

“When he starts to throw food,” she instructed, “try to grab his hand before he lets go of the food. Then guide it to your other hand, which you should hold palm up and open. Pry his hand open until the food drops into your palm, and then praise him like crazy. ‘Thank you for handing me the food, Squeak! Good job!'”

That sounded all well and good, but what if we weren’t quick enough?

“If he throws it before you can stop him, just pick up another piece of whatever he threw, put it in his hand, and guide his hand to your open palm—or to the edge of his tray, wherever you’d prefer he put the food instead of throwing it. Then do the same thing: open his hand, place the food in your open hand, and praise him like crazy,” she said.

Before he finished his food touches, he actually started to throw a piece of food, giving her an opportunity to show us this strategy in action. It looked easy enough.

And guess what? Back home that night, I tried it. I only had to do it twice, and the third time he picked up a bit of food to throw it, he stopped, appeared to think about it for a second… then held the food out to me.

I was in awe. It worked, and so fast!

It’s been about two weeks ago. We do a modified version of Dr. C’s process at lunch and dinner. Here’s how it works:

An added bonus: Squeak’s food touches make Peanut more eager to do hers. Watching her brother triumph is motivating her, and she even cheers him on, which is funny to hear.

“Come on, Baby! You can do it, just touch it to your wips, like dis!” She models it for him with an empty spoon most of the time; she is his biggest cheerleader, and it melts my heart.

Peanut’s routine has changed just a little, on the advice of Dr. C. She can no longer leave the table and come back later to do her food touches. If she hasn’t done them by the time the timer goes off, that’s it. No second chances.

As a result, she’s completed fewer of her food challenges these past few weeks, and it makes her mad sometimes. But she’s the one who’s missing out on pudding cups and other treats. I’ll admit we’re more likely to offer Squeak a pudding cup on a night that his sister is resisting her food touches. A little healthy competition never hurt anyone, right?

We’re still a long, long ways from my kids actually taking a bite of a strange food. But it’s a marathon, not a sprint. I just keep telling myself that.