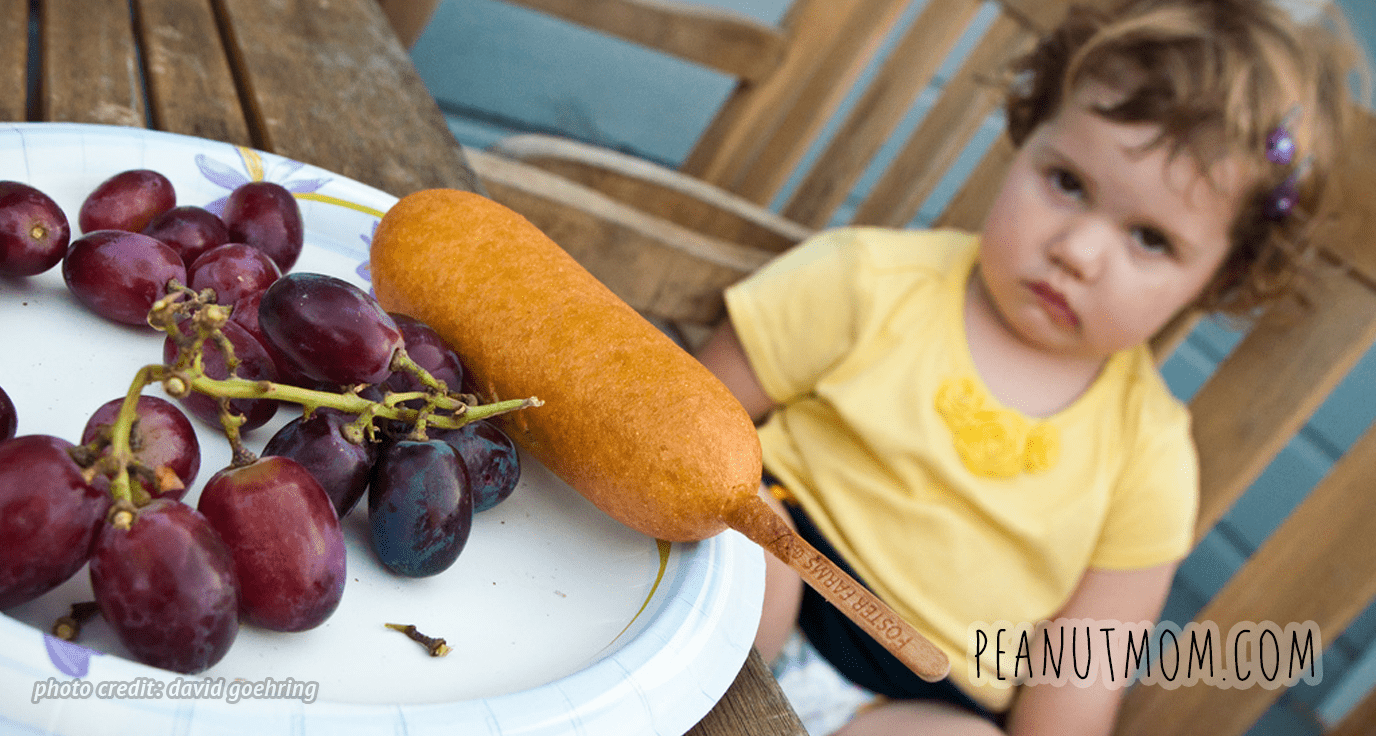 Every mom has their insecurities about parenting. Things we’re fairly certain that we’re doing wrong, with lasting consequences for our kids’ future.

Among this small (or large) pile of insecurities is one thing that rises above the rest: your greatest source of anxiety. You’re so unsure about your strategy in this area that when it comes up in conversation, you remain silent. You’re afraid saying something will reveal you as a total moron who doesn’t deserve to parent. When people give you unsolicited advice on the subject, you want to simultaneously punch them in the face and cry.

Mine is food. Specifically, what my kids eat and what they don’t.

Peanut has been a picky eater for a long time. She’s added only a couple of foods since she was 18 months old, and in that time, she’s dropped many that she used to eat, like cottage cheese.

Squeak has been a challenge from the beginning. At 6 months when we introduced solids, he wanted nothing to do with them. We waited a few weeks, tried again, and couldn’t even approach his mouth with a spoon—he’d whip out his killer left hook and strike it down. The only solids he’d eat were ones he could feed himself.

His self-feeding routine was basically Baby Led Weaning, which wasn’t a big problem. Families all over the world teach their babies to eat in exactly this manner.

When he didn’t want to eat what was on his tray, we’d offer him something he would eat. We were desperate for calories and the doctor’s voice was constantly in my head: “Get calories in him however you can.” At that point, I was waking up 3 times a night to nurse. I never denied him milk when he wanted to nurse, even when I was near-catatonic from broken nights of sleep. Fattening him up was top priority, and I panicked when he wouldn’t eat the solids we offered him.

For a long time, he mostly subsisted on crackers, bread, and cereal. Whatever we could get in him. We tried new foods, like blueberries, sweet potatoes in mooshy little chunks, cheese, and more. Squeak always responded the same way: by picking up the offending unfamiliar food and throwing it on the floor, where the dog would happily gobble it up.

It was incredibly frustrating, but still, we would circle back after his food-throwing and offer him something he did like. Because he needed the calories.

We had success getting fruits and vegetables into Squeak’s diet only with pouches. My husband blended up fruit-and-veggie smoothies with big dollops of peanut butter and lots of yogurt, spooning them into refillable pouches. We fed him fruit/veggie mixes like Happy Baby and Gerber Organic, and applesauce pouches from Costco. Squeak and Peanut both would suck them down in a hot minute.

Applesauce from a spoon was the antichrist, but by pouch, it was A-OK.

At his 12 month appointment, Squeak had gained weight, inching his way onto the chart—but only the 3rd percentile.

Bless his heart, our pediatrician never once told me I should stop nursing, or cut back. (He did give me permission to limit his night feedings if I wanted.) Doc asked a lot of questions about Squeak’s eating habits. What did he eat, how did he behave in the high chair? I was embarrassed to admit all of it, but I told the doctor everything: the food throwing, the almost-all-carbs diet.

He referred me to our community Early Access program, where I could have Squeak seen by an Occupational Therapist and consult with a dietitian for free.

I was excited when we started, but quickly lost hope. The OT would visit Squeak at daycare, sending home written reports that said things like, “Tried a spoon; he batted it away.”  Well no shit, Sherlock. “Worked with subject on touching spaghetti, he got upset and meal was ended.”

The two times she did visit Squeak at home, the OT left us with no tips or suggestions of what to try.

The dietitian was better. She gave me a long list of calorie-rich foods, and practical tips to wean him off pouches and bottles (he was still refusing to take a sippy cup). We came up with a plan for the food-throwing, where we’d sternly say “Food is for eating, not throwing,” and after the third toss, he’d come out of the high chair, with no food for 2 hours afterward.

The dietitian gave me a long list of tips to help Peanut with her aversion to new foods. We implemented a “Maybe Later Plate,” where she could put unfamiliar foods served to her (an improvement over the meltdowns).

A few weeks later, Squeak suddenly started taking a sippy cup. He ate several new foods—mostly at daycare—like blueberries, egg rolls, fish patties, and ham-n-cheese sandwiches. I stopped the OT visits and declared that we were over the hump.

You can tell where this is going: after a month of improvement, Squeak backslid. He stopped eating blueberries, would only eat sandwiches half the time, and wouldn’t touch fruit or vegetables at home (oddly, he was eating them at daycare, which I knew because I could see corn in his poops).

At his 15-month weight check, Squeak had improved to the seventh percentile. But things at home had devolved at mealtime, to the point I didn’t even tell my close friends, I was so embarrassed.

(How bad can it be, you ask? My kids don’t even eat the normal stuff you’d find on any kid’s menu. Pizza, macaroni and cheese, chicken strips, spaghetti, french fries, buttered noodles… not happening. They will eat only one brand of chicken nuggets (the Tyson dinosaur-shaped ones). Squeak won’t eat anything fed to him from a spoon. Neither kid will eat fruit or vegetables, save for raisins (do veggie straws count?). Their favorite meal of the day is breakfast, because they love cereal, pancakes, and french toast. The rest of their “yes” food list is carbs and snacks. It’s miserable and has a major negative impact on life. We have to take food everywhere we go, because they won’t eat anything.)

Back in his office, the doctor started asking about meals. I confessed everything.

We were basically preparing three menus at each meal: one for the kids, one for me, and one for my husband.

My diet consists almost completely of comfort food like meatloaf, macaroni and cheese, mashed potatoes, et cetera. It’s not adventurous. Most toddlers would be in heaven.

My husband’s diet is another story. He makes his own vegetarian meals, which usually consist of microwaving frozen chik’n patties, or scrambling a couple of eggs, or blending a fruit smoothie. I rarely call it ‘cooking,’ because he hardly ever fires the stove and combines ingredients to make food. He refuses to eat my cooking 95% of the time, even when it’s meatless. He just says he isn’t hungry most of the time. He prefers a small dinner and I prefer a big dinner. Our eating habits are polar opposites.

It’s been this way since even before we had kids. He used to eat more of my cooking, but he’s since decided it’s not healthy. He’d rather save his calories for a cupcake rather than my scalloped potatoes and ham. It’s ironic: many wives hate being burdened with cooking for their spouse and children, while I can’t get my husband to eat even though I’d happily cook for him.

Our every-man-for-himself method is not conducive to a sit-down family meal. Making it worse, since neither kid eats at daycare, they’re starving when he picks them up at 4pm. By the time I walk in the door at 5 or 5:30pm, he’s caved and made them dinner already. I’m stuck cooking and eating alone (with interruptions to wipe someone’s booty, mitigate a fight, or investigate what’s they’re destroying).

I confessed it all to the pediatrician. He referred me to a pediatric feeding specialist right here at our local teaching hospital. This woman, Dr. C, was the best of the best, he said, explaining that they fly in the toughest cases from all over the country to see her, like kids with feeding tubes who never learned to eat.

I was skeptical. I shouldn’t be taking up this doctor’s time with my picky eaters! My kids weren’t that bad, right?

The following Monday, after a shit-show of a weekend where every meal was a fight, I called the specialist. A week later, I called again, and they told me they were “working on finding a time for me.” A month after that, the dietitian reached out to me to see how things were going.

“Awful,” I told her. “And the feeding specialist apparently is impossible to get into.”

The dietitian said she’d make a call to Doctor C. The next day, I got a call from Doctor C herself and I had an appointment for Peanut the following week.

In Part Three of “World War Food, Part Two,” I’ll describe our first appointment with Dr. C, the feeding expert. Spoiler alert: I walked out of the clinic with food in my hair and snot all over my clothes, emotionally exhausted, and worried that I was quite possibly the WORST PARENT IN THE UNIVERSE. More to come.