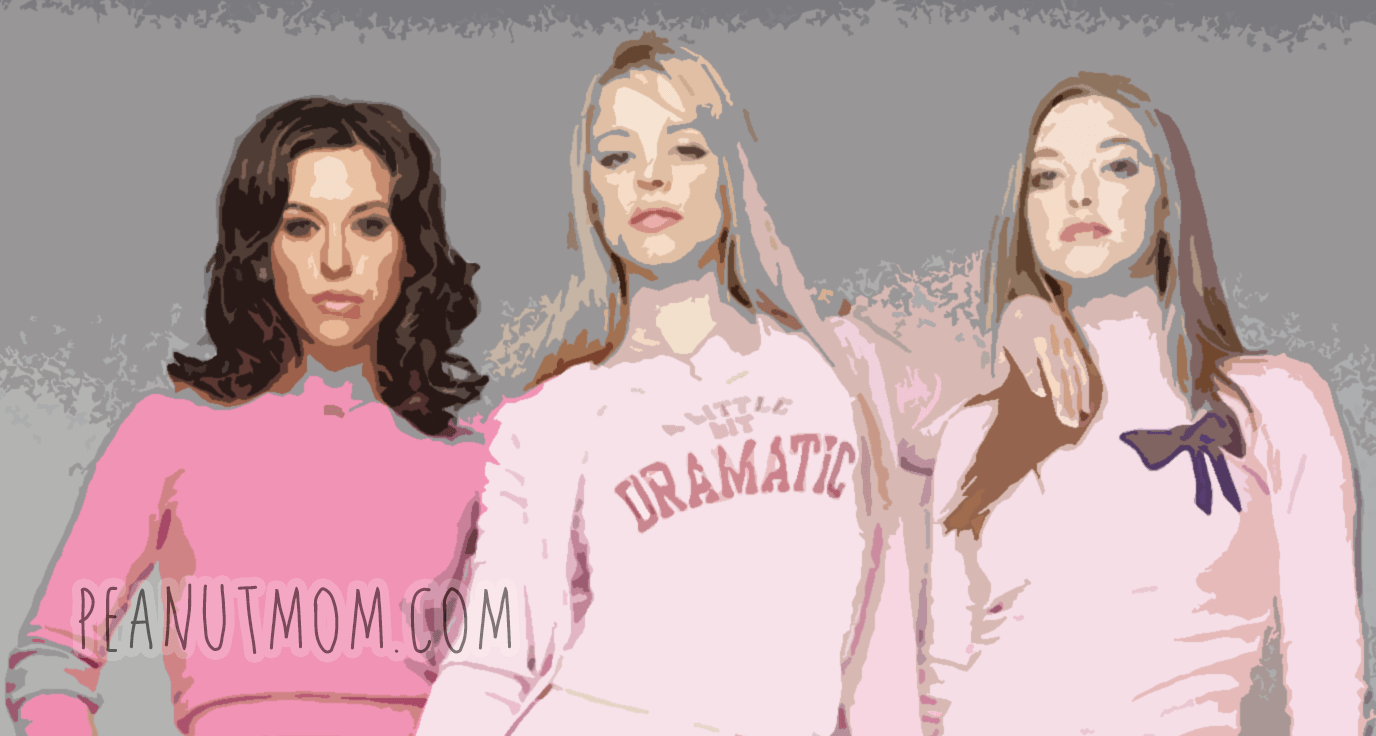 When I first saw the movie Mean Girls, it was like reuniting with an old friend. The instant Regina George spoke, I recognized her.

Because unfortunately, Regina George is my inner voice, and has been my entire life. She wreaks havoc in so many ways.

Exhibit A: I’m a terrible hostess.

From start to finish when I have guests, I stress about everything. Will anyone show up? Did I make enough food? Are people having a good time? Is the music too dancey? Will they hate my food? Do they think I’m a yammering idiot?

I could be a better hostess with more practice. But I don’t invite friends over often, which I blame on Regina.

Having people over involves inviting them, and the idea of inviting friends to do anything makes my stomach drop. I am terrified they’ll say no.

Big deal, you’re thinking. People say no to invitations all the time.

When normal people offer an invitation, and the invitee says no, a normal woman thinks, “Hmm. That’s too bad, they’re going to miss a fun party!” or maybe “She’s really busy this time of year.”

Thanks to Regina, my thoughts are far more sinister.

When a friend declines my invitation, Regina taps me on the shoulder. “You know she doesn’t really like hanging out with you. That’s why she said no this time, and that other time back in 2012. She’s not busy. She just thinks you’re stupid and is trying to politely break it off. Are you so dumb that you can’t see that?”

When you hear Regina’s voice enough, she wears you down. She worms into your ear and you start to believe her.

I’ve had a lot of time to listen. Regina has been with me since… well, if I’m honest, elementary school. She was there in middle school and high school, and based on some of the awful choices I made in college, I can say with certainty she was hanging around then as well.

Years ago, when we bought our house, Nathan and I had a housewarming party. I invited lots of friends through a Facebook event. A good group of folks came. (I remember freaking out the entire time and vowing I’d never do it again, but still, it was a decent time.) But a handful of people responded to the invite with ‘CAN’T GO.’ No explanation. Just a ‘nope, won’t be there.’

Regina had a heyday. “Oh, Amy? She makes fun of you behind your back. And Bill? He thinks your husband is a douche. Natalie too… she probably just decided she liked her other friends more and didn’t have time for someone like you. It’s not her. It’s you.”

She didn’t seem to care about the 17 people who marked ‘GOING’ and showed up. Regina dwelled on the 14 who weren’t coming, and she wouldn’t shut up.

I’ve gotten to the point that extending any invitation is so anxiety-inducing that I avoid it like crazy. But that just makes me feel worse, because then I’m home alone with the kids, isolated (at which point Regina starts in, telling me that I have no friends, nobody likes me, yada yada).

Because the alternative (isolation) is worse, I plan play dates and get-togethers with friends, especially on weekends. But it’s not easy for me. I save my invites for friendships in which I’m very secure, which isn’t many.

I avoid friends with a record of saying ‘no’ more than they say ‘yes.’ It’s just not worth the self-doubt I’ll experience if they say no, or listening to Regina for days on end.

I probably sound self-centered. If a friend says no because she’s busy, why am I making it ‘all about me’?

My therapist explained it this way: Regina ascribes to others the very worst of my own traits. I admit it: sometimes I turn down invitations for bad reasons. I don’t have a full schedule or a sick kid, but I say no because the invitation just isn’t appealing.

Maybe I’d have to hire a sitter, and the potential fun I’d have doesn’t outweigh the $42 I’d have to spend. Maybe I’m worn out and want to veg on the couch. Maybe the inviter has talked incessantly about herself the last few times we hung out, and I’d like a break from being an audience to her monologue. Maybe the activity would be more stressful than enjoyable and it’s not worth it.

I say no to invites for me-centered reasons infrequently. Maybe 10% of the time.

But Regina claims it’s personal every single time someone says no to me. She insists they decline because they dislike me, don’t have fun around me, or would rather stay home alone than spend an evening with me and my weirdo husband.

Regina makes me doubt my friendships, too. If more than a few days pass without a text exchange, she’ll start in: “You haven’t heard from Lindsey in a week… I bet she finally decided you weren’t worth the trouble. Plus I saw her Facebook post yesterday where she had another playdate with Jenny… looks like you’ve been replaced.”

Regina knows me well. She knows to go straight to my deepest insecurity: not being liked.

But I’ve had it with Regina George. I’ve given her far too much attention lately.

So I did what I always do when things pile up and I don’t know how to begin. I laid it all out to my therapist. (Seriously people, therapists are the best. thing. ever. Go get one.)

She pointed out that this is, quite literally, all in my head. She reminded me that I should be practicing my mindfulness, because it would be helpful in these situations, where I’m inside my own head and struggling to get out.

(Mindfulness silences Regina in an instant. It pulls me out of my head and into the present, providing me with some perspective. What’s real, and what isn’t. Regina is not real.)

She also explained how Regina creates a self-fulfilling prophecy in social situations.

For example, I’ll be having a great time at a neighbor’s house, sipping a beer on their porch and shooting the shit while our kids romp around the yard. Then another couple stops by. Regina starts whispering in my ear, and suddenly, I stop joining in the conversation. I slink off the porch and into the yard, pretending my kids need something.

Then Regina points out that I’m not part of the group, and tells me how happy everyone seems to be that I’ve left the conversation. Depressed, I make up an excuse and go home. Regina reminds me how lame I am, which is why nobody there wanted to talk to me.

But in reality, before Regina showed up, I was part of the group. I let my self-doubt exclude me. Regina made claims about my friends that weren’t true, and since they fit nicely with my self-pity narrative, I believed her… despite zero proof of anyone intentionally excluding me, or anyone wanting me to leave.

I hate Regina, and I’m also afraid of her. She knows me well, and she knows how to go straight for the jugular.

But you cannot overcome a fear without facing it. My therapist reminded me of that, too.

I invited our friends Allie and Joe over last weekend, along with their son, who’s close in age to Squeak. We had a lovely dinner. Allie is a safe friend, who says ‘yes’ a lot and makes me feel at ease.

This week, when an impromptu patio gathering happened at a neighbor’s house, I managed to keep Regina quiet while I talked to the other grown-ups. I was determined to be myself. I think I did an okay job.

“Besides,” my therapist asked. “How can anyone know if they like you—the real you—if you’re too busy listening to Regina to be yourself?”

I’m not sure I’ll ever get rid of Regina George. I keep hoping I’ll outgrow her. I’m 36 years old, for pete’s sake. But she doesn’t appear to be going anywhere.

I have a feeling she’ll hang around a lot longer, getting chummy with Lucille Bluth (that’s what I’ve named my guilt).

In the meantime, I’ll try to remember that I’m in charge. I’m the driver of my bus. I can’t control my thoughts—in other words, I can’t kick Regina off—but I decide how much control they’ll have over me.

And I can send Regina’s plastic ass to the back of the bus whenever I damn well please.