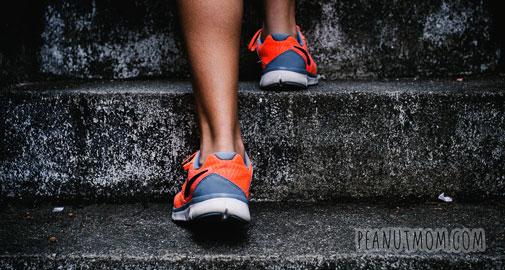 I talked constantly about going to the gym, and in particular, my group fitness classes. “What a workout! That Jamie is a slave driver!” and “Diana, my legs are going to hate you tomorrow!!”

They were always drowning in exclamation marks, and at the time, they seemed appropriate. I was happy and proud of myself and satisfied with the effort I’d put in.

Reading them now makes me cringe. My parent friends must have been so annoyed. I hope Facebook’s algorithm was kind enough to hide my statuses from the people who’d hate them the most. It must have been; there’s no other explanation for why I still have friends today. 😉

And then it all fell apart

Just after I got pregnant with Peanut, in 2011, I stopped going.

I worked so f***ing hard for that pregnancy, I would not jeopardize it by pushing myself physically(1)Yes, I’m fully aware that exercise doesn’t cause miscarriage, but I wasn’t taking any chances. Building a human is enough stress for a body already..

For a week or two after learning I was pregnant, I still showed up to class. I stood at the back and followed the routines, except now I was doing the low-intensity modifications—the same ones as Melvin, the 80-year-old dude with the terry-cloth sweatband. I was afraid to squat more than 30 pounds, and terrified of push-ups.

I felt weak and worthless, so I quit, choosing instead to take two-mile walks daily(2)Which serendipitously led me to a wonderful new friend, Orv… the link describes his short but important impact on me and my life..

After Peanut arrived, the responsibilities of being a new mom overwhelmed me. I was burning lots of calories thanks to nursing and good genes, so my waistline wasn’t urging me to get back to the gym. Aside from general guilt for not taking care of myself better, I wasn’t motivated to work out.

When a full year passed and I hadn’t once used the gym membership I was paying for, I cancelled it. I nursed Peanut for a bit longer, took one month off and then we transferred another embryo. Like before, I wasn’t going to risk screwing up my pregnancy. Squeak arrived in July 2014, and he was a shitty sleeper from the get-go. I was too tired to even think about exercise for a year and a half. I played volleyball once a week (not particularly well); that was the extent of my exercise for over four years.

When January 2016 arrived, I resolved to start working out again. I didn’t want to take time away from my kiddos to exercise, so I secured a membership for the gym at my work. They had rows of treadmills and ellipticals, free weights, and weight machines. The price was right: $15 a month. Piece of cake. I kept my goal modest: two days a week.

I did virtually the same workout every time: walk one-tenth of a mile, then run one mile at about 6mph. After that I lifted either upper body (biceps, triceps, shoulders) or lower (quads, hammies, glutes). I skipped abs entirely and did two quick sets with high weight until I couldn’t lift any more, then moved on to the next exercise.

I worked out twice a week for all of 2016. Occasionally I’d skip the treadmill and ride the bike. When the temperature was over 70º, I ran outdoors. But by August, I was bored stiff. The thought of another year of self-directed and minimally challenging workouts was enough to put me to sleep.

Taking it to the Next Level

A few days later, an ad popped up in my Facebook news feed. It featured a gym that had recently opened near my house. It’s premise is group fitness classes that push your limits pretty hard. They also try to remove all the barriers: there’s free child care for evening classes, and while you sign up for a certain class time, if your schedule changes, you can attend any others without prior notice. They do eight-week sessions that are embarrassingly expensive, but if you sign on for six months, it’s just $80/month—a bit ridiculous, but not embarrassing.

I went to a trial class last Thursday and left invigorated. It was everything I had missed over the last year: the motivation, the challenge, the camaraderie. I worked hard to keep up with everyone around me (not saying I accomplished it, but dammit, I tried), both to make myself proud and to make the instructors proud* of me, too. (I don’t know why this matters to me, but it does. I’m weird.)

After the trial class, I signed on for the eight-week session that starts tomorrow morning. I am going to try to go five days a week, which is a big jump up from two. I’ll go at 6:00am and bust my ass to get home, shower, eat, and race off to work by 8:30am (this will mean half-hour lunches, but that’s all I normally take anyway).

I’m excited—and scared. But at least six of my friends—both moms and those without kids—are members, and every single one raves about it. I’ll look to them for a pick-up if my motivation wanes. I hope I can hack it. I’ll be happy if I can still walk on Friday.

Consider this my solemn vow, Mom friends: I will not post incessantly on Facebook about working out. I am excited to try something new, but I recognize that many friends are today where I was from 2011 to 2015: pregnant, or trying to get pregnant, or nursing, or parenting a non-sleeping infant, or just trying to get through the damn day alive and sane. For five years, I simply could not squeeze another hour out of my day to work out.

If you’re there now, don’t feel guilty.  For five years, I focused on making and raising tiny humans. My life was full up with that huge responsibility. I put myself and my physical health second (or third, if you count two kids). I’ve finally leveled out and I’m ready for some rebalancing.

Maybe you will be someday. Or maybe not, and that’s okay too. This is me doing something for me; it’s a bonus that my kids, husband, marriage, and volleyball team will reap tangential benefits. A woman who feels good is a better mom, wife, coworker, and middle blocker. 😉

*Update: I went to my first 6:00am class this morning. We focused on kickboxing today, and punching a bag for the first time was intensely satisfying. I’ve taken Body Combat class before, so the form was nothing new. Actually hitting something besides air? AWESOME.

Bonus: The instructor was milling about the room and stopped at my bag. “Have you done this before?” she asked.

She nodded at me. “You’re doing a great job. What’s your name?” I grinned and told her. She nodded again, smiled at me, and continued on.

It totally made my day. Just that little bit of recognition that I was doing well, and doing it right, was the fuel that kept me hitting that bag hard, until my arms felt like jelly. They still do. This could get interesting around 4:00pm. Wish me luck.