To the mom in the trenches: it gets easier 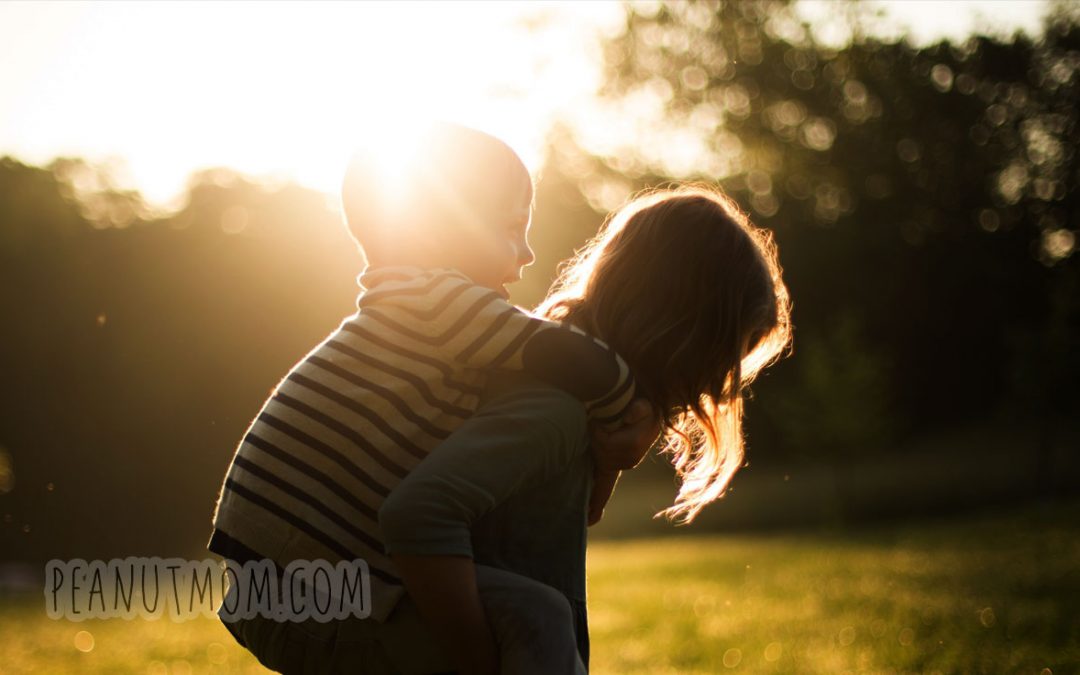 On Memorial Day weekend, our little family of four visited a zoo about an hour away from our house. It’s a cute zoo, complete with your usual array of reptiles and big cats, with a couple of giraffes thrown in for good measure (no elephants, though).

As we left the last exhibit, my husband and Peanut lagged behind while I walked with Squeak toward the entrance. He has a major jones for pushing things, so I was letting him push the Sit ‘n Stand stroller, and monitoring his driving to make sure he didn’t clip anyone’s ankles.

Nearing the zoo railroad tracks, a memory stopped me. I looked at the bend in the sidewalk just ahead and had a vision of our previous zoo visit, three years earlier. At that same spot, Peanut had thrown the mother of all tantrums. She was just turning two, and I was holding a fresh two-week-old Squeak in a carrier on my chest. Peanut lay thrashing on the sidewalk, furious because we wouldn’t let her push the stroller. Squeak was beginning to cry, and I desperately wanted to get out of that zoo and back to the car, where I could nurse in peace (and in the air conditioning).

I clearly remember the exasperation I felt at that moment, wanting to cry and scream simultaneously, and wishing the Earth could just swallow me whole for a little while, to give me a break from it all. Why did parenting have to be so goddamned damn hard all the time? Why couldn’t we just enjoy a trip to the zoo, for f***’s sake?!

This time, in the present day, my state of mind was completely different. Maybe we’d lightened up as parents, or maybe Squeak was a much better stroller-pusher than his sister; I really don’t remember. Maybe I’ve stopped caring so much what other parents think of my parenting choices—and perhaps I care less about the ankles of strangers.

More likely it’s this: my kids are growing up.

True, that transition is excruciating to think about. It’s another paradigm shift, just like the one I experienced when I fully accepted that I was done having babies. I’m no longer a Mom of Wittle Babies, but a Mom of Toddlers.

More accurately, in two months, I’ll be a Mom of a Kid and a Toddler. Diapers will soon (fingers crossed) be a thing of the past in my home, and I’ll be of little help to my friends who are shopping for strollers and baby swings and breast pumps. My advice on all things infant is rapidly aging, and will soon become (if it’s not already) obsolete. What a strange feeling.

Look at the bright side

On the other side of the My Kids Are Growing Up, Wahhhhh coin is a freeing and wonderful realization: This is Getting Easier.  When we finished buckling both kids into the car after our zoo trip last month, I took a moment to take inventory of my state of mind, and to appreciate how much better this trip had ended versus our visit three years ago.

This time, I wasn’t stressed out and tearful. I had thoroughly enjoyed myself, and the time with my babies especially. I had fun—lots of it.

Present day reality is no nirvana, of course. My kids still throw thrashing tantrums, but I can reason them through it now. They communicate their wants and needs and irrational demands, and I can communicate back in a way they understand. They’re less volatile, and more predictable.

Today was a Saturday, and Nathan is out of town, leaving me on solo parent duty. I’ve been dreading an entire Saturday with nothing planned, so earlier in the week, a friend and I had decided to take the kids to an event in a nearby city that advertised a bunch of inflatables. But the day before, a family obligation came up for my friend and she had to bail. I was disappointed, and at first decided maybe I shouldn’t take them anywhere. Just me with a four and two-year-old, out in public, in an uncontrolled environment? I didn’t think I could handle it.

It was decided; we would go. After nap, I piled us all into the Family Truckster. I took along some snacks, water bottles, sunscreen, and talked to Peanut and Squeak on the way there about Good Listening Ears. I explained how important listening was at the bouncy houses, since I would be just one mommy trying to keep track of two kids.

For the most part, they did great. Squeak did disappear on me (he ran to a different bouncy house when I wasn’t looking), but I spotted him after only about 30 seconds of panic. When it was time to leave, there was some whining, but no tantrums.

I took each kiddo by the hand as we walked to our parked car, and in my head, I had a little high-five/chest-bump moment. We’d made it in one piece, and I wasn’t a frazzled ball of stress.

Get to the point, Lydia

My point: to all you mamas in the trenches of parenting with small children, when you’re having a Zoo Sidewalk Tantrum Moment, when you just want to cry because you’re positive it will always be this hard… hang in there.

It gets easier. Maybe not today, or tomorrow, or even next month, but eventually, it will. You won’t even realize it’s happening until it’s here. And it will be a sweet, sweet moment when it arrives.