Why I Hate Tulsa, Oklahoma 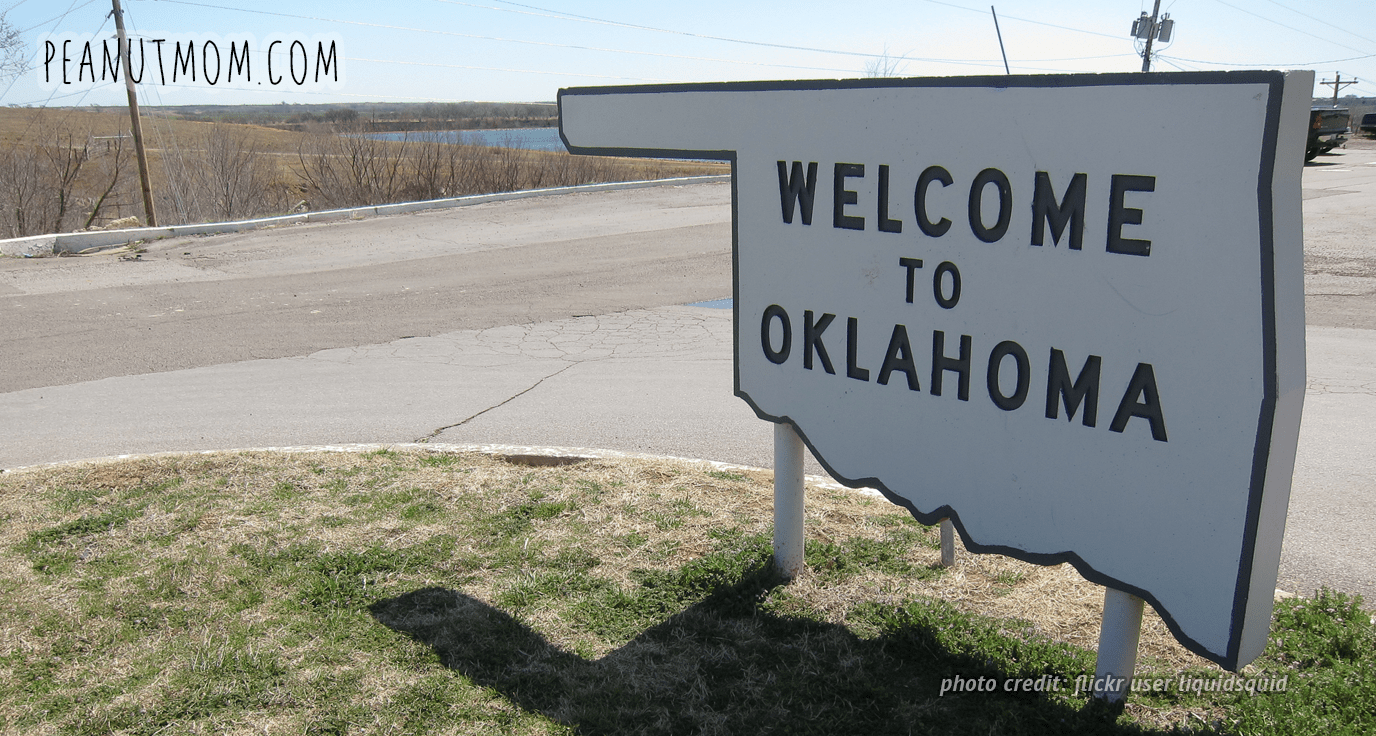 A warning for the male reader: This blog contains some themes you might find gross. But if you are a father to a daughter, you need to read it anyway. It’s important.

It was August 1994, and I was 14 years old. Something momentous was about to happen to me for the very first time: my period.

The first time you get your period it’s usually no big thing, literally. A few splotches of brown, and that’s about all. I remember discovering mine. I knew what I was seeing–I’d taken sex ed class (horrifyingly, my mother was the teacher… and you wonder why I see a therapist), and I had heard stories from my friends.

I was the last girl in my class to get it, and although I was happy to no longer be The Only Girl Who Didn’t Have Her Period Yet, I was embarrassed. I was worried about how this new and unfamiliar thing would affect me.

My family, despite being 5 women and just 1 male, didn’t talk openly about things like periods. The onset of womanhood was something my cousins teased us about, and something we didn’t generally want people to know. I even remember one of my sisters earning the nickname “Ketchup” after getting her first period.

I told my older sister that afternoon. She was unimpressed and didn’t offer much in the way of reassurance.

I waited until the next morning. The scene, although short and sweet, is pretty clearly seared into my memory. My mother came into my room to tell me to get up. I started to comply, and she turned to leave.

She reappeared in the doorway. “Hmm?”

My voice was quiet. “I think I got my period.”

She was all business. “Okay, let’s see, it’s August, so that would make you… fourteen years and five months. Remember that, because you’ll need to tell your gynecologist when you start going.”

And with that, she turned and left the room.

That was it. No celebration, no speech. No mother-daughter bonding like Are You There God? It’s Me Margaret had gotten. I think later that day she told me I could have some of her maxipads if I needed them, but I blushed bright red and didn’t respond. All I knew was that my older sisters didn’t have those giant winged things under their bathroom sink, so there was obviously something uncool about them.

That night, my father joked about my milestone at the supper table. I can’t recall his exact words, but I remember him laughing. My mother scolded him. Blood roared in my ears as I silently pleaded him to SHUT UP.

The topic never came up again.

To my delight, several weeks passed with no sign of my period returning. I guessed that the spots I saw in August were just a fluke, and I wouldn’t start my “real” period until I was 16, like the rest of the women in my family. I didn’t give my cycle a second thought.

Three months later, my older sister and I went on a trip to Oklahoma with my dad. He worked in the oil business and had arranged a couple of refinery tours in Tulsa. It was the three of us plus a family friend, an old man in his seventies. Everyone would drive 7 hours down, stay two nights, then drive back.

About 90 minutes into the trip, we stopped at a gas station. I was greeted in the bathroom with the sight of bright red blood. A lot of it. I was horrified. I hadn’t brought a single pad with me. I asked my father for a quarter without telling him what it was for, put it into the bathroom vending machine to get a pad, but nothing came out. I was too humiliated to ask for more change, so I wadded up toilet paper and prayed it would contain the bleeding.

When we got back in the car, I told my sister.

She looked out the window. I was on my own.

At the next gas station, I tried again. This time the machines were empty. More toilet paper and paper towels. By this point my denim shorts were definitely stained and I was just hoping I didn’t bleed on the seats of the old man’s Chrysler LeBaron.

When the third gas station had nothing in the vending machines, I cried quietly in the stall. I didn’t know what to do, and I was miserable.

When we got to Tulsa my sister gave me a tampon so I could at least go swimming in the hotel pool. It wasn’t much help since I had never used one before, but I figured it out. I really, really wanted to go swimming, and there’s nothing like desperation to get you to do something that frightens you.

I managed to get a couple of pads, just enough to get me through the evening and the next morning. But when I ran out I was back at square one, stuffing toilet paper in my underwear and praying for gas station bathrooms with stocked vending machines.

I was moody and sullen the entire time; my embarrassment consumed my thoughts so much that I didn’t enjoy any of the trip–including the refinery tours, which as a big nerd, I had been excited about. All I could think about was my period, which was heavy and I even had cramps. It was awful.

I had never been so happy to arrive home as I was at the end of the trip. It had felt like two YEARS.

I didn’t tell my mother about the Tulsa trip until many months later. Her reaction was utter disbelief. “Why didn’t you just ask him to stop at a Wal-Mart so you could buy some pads?”

I didn’t have a good answer for her. I was more willing to endure the awfulness of improvised feminine hygiene supplies than to say ten simple words to my father: “I got my period and need to stop at Wal-Mart.”

I’m not placing all the blame on my parents. My own modesty was largely to blame. But I wish my mother had been a little less technical, and a little more emotional, about the whole thing. She didn’t start conversations about our maturing bodies or the changes we were going through. In fact, she poked fun at her best friend, who tracked her two teenage daughters’ periods using a calendar on the refrigerator. The friend marked the days to be sure her daughters were stocked with feminine supplies, or so she could remind them to pack tampons if they were going to be away from home.

My mother had no idea when my period came each month, and my father considered it something to joke about. With four daughters, he made plenty of “I should buy stock in Tampax” jokes with other parents. I’m sure he was just trying to make light of the situation, but to me his teasing meant that I should keep anything period-related a secret.

Now that I’m a parent, I vow to handle things differently.

When my daughter reaches puberty, I’ll give her plenty of advance info about her period. I won’t let Sex Ed class be the only place she learns about her body. I’ll talk to her, and hopefully it will be a dialogue, not a monologue. I don’t want her to be embarrassed.

My husband has a bigger part to play.

I told him this story, and told him how important it is that he never, ever tease her about her body or her period.

A book I read recently, The Secrets of Happy Families, specifically addresses how to talk to your kids about sex and sexuality. They advise referring to body parts by their real names from the get-go, and talking about sex and your body’s inner workings from an early age. It’s a lot easier to talk to a 9-year-old than a 14-year-old, after all. So if you set the tone early on, you won’t have to struggle through awkward conversations later.

When he was writing the chapter on The Sex Talk, the author asked a group of teen girls for advice. What would they tell dads to say to their daughters when conversation turns to the subject of menstruation?

“Don’t gross out,” one girl said. “My dad hates it when the garbage cans fill up with tampons. He gets so awkward. Once he wouldn’t even buy me tampons from the drugstore. But even if you are embarrassed, pretend you’re not, and your kids will feel more comfortable.”

That’s my goal. And that’s my husband’s goal, too, though he may not know it yet.

If I ever find myself too embarrassed to bring up a topic with my kids, I will just think about Tulsa, Oklahoma. It’s been 21 years, yet I can’t hear the word ‘Tulsa’ without getting angry.

I think about how I felt, during one of the worst periods (no pun intended) of my adolescence: humiliated, stressed out, and like I had no choice but to suffer silently, all because I couldn’t talk to my own father about something perfectly natural.

And for her sake, I hope Peanut never ever has to take a trip to Tulsa.

P.S. – When I told my older sister — the one who accompanied me to Tulsa — about this post, she laughed. “I have zero recollection of that happening on that trip,” she said. It’s funny that way, isn’t it? I can’t forget it and the other people who were there can’t remember it. 🙂