I’m a bad blogger… and a parking lot vigilante 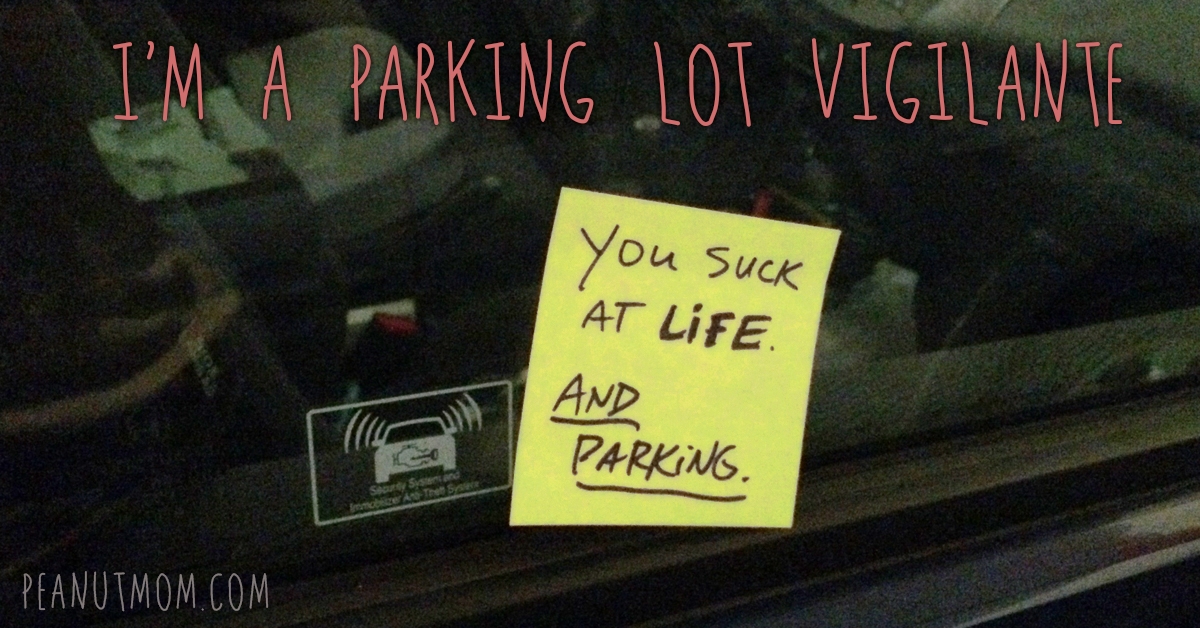 You know when you can’t possibly handle one more thing on your to-do list?

That’s me, pretty much every day. And to retain my sanity, I’m trying to let a few small things go by the wayside. Sadly, that thing has been blogging as of late. *womp womp*

I really love to write. It’s therapeutic for me to get the thoughts clanging around inside my head out on paper (okay, on screen). But to do it up properly takes time. Especially if I want a nice image, proper tags and categories, blahblahblah. If I want it to be well-written, it takes even longer.

Added to the feeling of “I really want to blog but I just don’t have enough time,” I also feel like I’m lacking interesting things to say. Not because my life is boring, but because I am bound by things like “courtesy” and “manners” and “personal relationship boundaries.” *rolls eyes*

There’s a good amount of shit going down in my world right now, and only a little is acceptable for public consumption. As far as what I can’t talk about:  some people are trying out new methods of bat-shit-crazy on me and my husband, while others are behaving in ways that are completely uncharacteristic of them. But I can’t talk about those situations without outing the offenders, and that would either upset them (which would make me sad), or in cases where I don’t give a crap what they think, would give them license to make my life hell. I don’t want that either. So I remain silent and forever hold my peace.

(Or at least until the crazy one drops dead, and at that point, it’s game on, mofo. You make my life hell, I ruin your legacy. BA HA HA!)

One thing I can openly share is that my wittle Squeaker has to get tubes. I’m worried, like all parents would be when their wittle person has to go under anesthesia (especially because my wittle person is only six months old!), but I’m also hoping this sees some relief to the horrible sleep, the bad weight gain, and of course, the incessant ear infections and antibiotics. We go in tomorrow morning for our ENT consult and hope to have tubes within the week. I want a healthy baby, dammit.

Real quick sidenote — if you have a little one about to have surgery, and they are taking little solids (Squeak has solids at dinner, but not much… he hates them so far!), you don’t have to starve them for 8 hours before surgery if they’re breastfed. Just four hours! I was so relieved to hear this. Trying to get Squeak to go 8 hours without nursing would be pure torture for him and for me. I cannot imagine how awful that would’ve been. Luckily I am armed with information and the advice of a good anesthetist friend who tells me that 4 hours is standard for breastmilk before surgery. I’m just waiting for them to tell me 8 hours because I am going to pounce like a feral alley cat.

Ooh ooh! I thought of something else fun. This past week, I officially earned myself the title of PARKING LOT VIGILANTE.

Incident #1: Not a compact car, idiot

On Tuesday I returned to my car in the parking ramp at work and saw a police officer handling a fender bender. Where the ramp curves, two cars can get through fine, but not if one of them is swinging wide to avoid a big-ass car parked in the COMPACT spot. Sure enough, some giant boat was parked there, and two cars did a near-head-on collision. I noted the boat (a Lincoln) and the next morning as I arrived at work, was perplexed to see the same car parking in the same spot. I waited until the driver exited and got into the elevator, then left a lovely Post-It note:

YOURS IS NOT A COMPACT CAR. IT IS DANGEROUS FOR OTHER DRIVERS WHEN YOU PARK HERE. PLEASE DON’T.

The Lincoln was nowhere near the Compact spot the next day, or the day after that. BOOYAH. Parking ramp justice!

On Wednesday, I left work later than normal because I lost track of time. My husband was out of town and I needed to pick up the kids from daycare before it closed. My parking ramp sometimes has a short line at the exit, where people are paying or, like me, swiping their key fobs to raise the gate if they pay the monthly rate.

That afternoon, there was a holdup at the exit. I was the fourth car back, and watched the front car give their credit card to the cashier. And then… nothing. The card was handed back to the driver, and the gate didn’t move. I waited, chatting on the phone to a friend about Squeak’s upcoming surgery. Five, six, seven minutes went by. Finally I told my friend I needed to go. This was getting ri-goddamn-diculous.

I grabbed my key fob and jumped out of my car, approaching the cashier booth. “What’s going on here?” I asked, not without a little annoyance.

The bewildered cashier shrugged. “My machine, it break, and I call them, they say they send someone down, but I don’t know how long it take,” she said. I think she was new.

My temper flared. “I am completely and totally unconcerned with your machine,” I told her. I looked at the driver, who was ready to bust through the gate. I waved my key fob in front of the sensor. The gate whirred open.

“GO,” I ordered the driver, pointing out of the ramp.

She gleefully put her car into gear. “Thank you!” she shouted. I waved my card again for the next car, beckoning the third car like a traffic cop.

“Come on, come on, people! Get out!” I hollered. I then ran back to my car and jumped in, waving my key a fourth time to get my own car out. I drove away like my pants were on fire, jittery and heart pounding. I hadn’t ever busted someone out of a parking ramp before. I briefly considered how I’d look in a prison jumpsuit, then realized I probably shafted my employer out of about $18.00. They’d probably leave me alone. 🙂

On Friday, I made a rare kid-free trip to Target at our local mall. Next to the Target, a restaurant is being gutted as a new tenant moves in, and naturally there’s a lot of construction activity. As I tried to find a spot in the icy parking lot, I noticed two white trucks parked right in front of Target, in the first and third spot away from the entrance. The insignia on the side of each truck revealed that they belonged to a local general contractor. It didn’t click at first, but by the time I left Target (noticing the trucks hadn’t moved, of course), I realized they weren’t shopping. They were working. And as everyone knows, if you are working at the mall, you park your ass WAY OUT IN BUTT-F***ING EGYPT at the back of the lot, so actual shoppers can have the primo spots. I was irritated, but I’d have been shooting steam out my ears if I was carting two kids with me.

I wrote a not-so-sweet Post-It note to the workers, and tucked it into the window seal.

IF YOU ARE HERE TO WORK, NOT SHOP, LEAVE THE SPOTS NEAR THE ENTRANCE FOR SHOPPERS WITH SMALL CHILDREN AND SENIORS WHO HAVE TROUBLE WALKING ON THE ICE!

Satisfied, I backed out of my spot and started to leave when I remembered my newly acquired Parking Lot Vigilante title. I picked up my phone and googled the contractor’s phone number.

The receptionist at the general contractor’s office was very polite. When I told her why I was calling, claiming it was just a little silly thing, she got very stern and asked me for the numbers on each truck. She must have been a fellow mom because she took down the information like I was reporting a felony. “I will report this to the hiring supervisor immediately,” she assured me.

Next to the GC trucks was an electrician’s van, and that I let slide. He was probably running out to his van often to get tools and supplies. But the two white trucks didn’t even have a toolbox in the back. These dudes were just hammer-swingers. Obviously lazy ones who didn’t have the good sense to park in the back of the lot.

TAKE THAT, BUDDY. Maybe next time you’ll think of someone besides yourself when you park.

This has been Parking Lot Vigilante.