Why I can’t accept your help 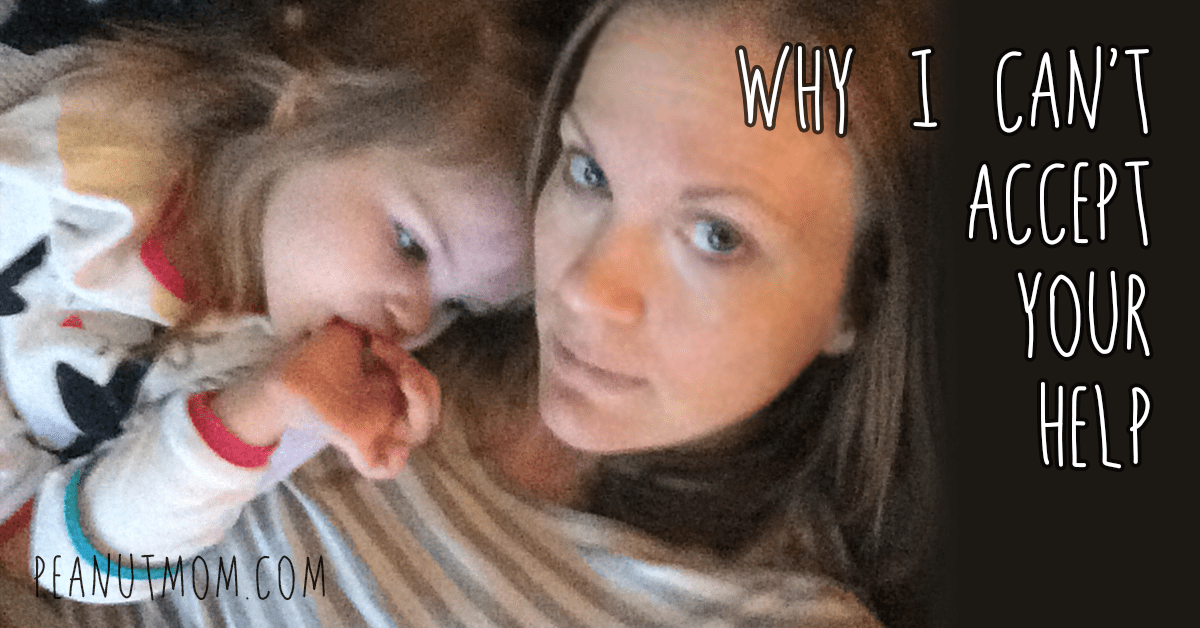 I’m in the entryway of a friend’s house, tracking down mittens and mitigating tantrums as I break the news to Peanut that it’s time to go home. I test the limits of my hamstrings as I squat, strapping Squeak into his carseat and zipping Peanut into her winter coat. I check the diaper bag for everything I brought out during the visit: diapers, changing pad, wipes, sippy cup, a ziploc bag of goldfish crackers. And then I check for my own possessions: my phone and my purse, followed by putting on my own winter coat, scarf, and hat. I sling the diaper bag onto whichever free shoulder I have, and bend down to pick up the infant carseat, Squeak protesting inside because he hates the Cozy Cover. That’s how it typically goes, give or take a tantrum.

Somewhere in the middle of this, the kind friend says, “Do you need me to carry something for you?”

My answer is almost always the same. “No, thanks, I’ve got it.”

But actually, I don’t have it. At least not easily. Let’s face it — I’m struggling.

My left shoulder is cramping from the purse-plus-diaper-bag combo, and my right forearm is already falling asleep from the infant car seat’s vicious handle. I’m not sure I can keep hold of Peanut’s hand as we walk to the car, because it’s icy and I’m a little worried I’ll slip in the dark.

Why do I do this? And not just some of the time, but every single time?

At that moment, when my kind friend asks if she/he can help, my pride is my worst enemy. It’s a huge pain in the ass, when it comes to being a mother.

I signed up for motherhood with eyes wide open. I knew it would be hard, and I knew I’d be doing some parenting on my own, while my husband travels for work. So isn’t it an admission of weakness if I can’t do it all on my own?

That last question is posed by that illogical voice that keeps me doubting myself, and prevents me from accepting the help. I wonder how many other moms have the same voice.

Is it really so bad to accept the help? Or more pointedly, to actually ask for it instead of waiting for it to be offered?

It’s time to stop being such a martyr, Lydia. So what if I chose to be a parent? I didn’t sign up for a solo gig. Nobody does. It takes a village, right? (Yes, it does.)

Mothers — me especially — need to remember that parenting a few decades ago is nowhere near the lonely pursuit it is now… at some point, we stigmatized asking for help. Admitting you need a hand. Accepting assistance when offered. It’s a bad habit we all need to break. What are we afraid of?

Being judged? Being thought of as weak, inept, incompetent, less-than-thou?

I came to an easy conclusion: anyone who thinks I’m weak because I need a hand with two kids on a winter night in 10-below wind chill is an awful person. Luckily, I associate with very few awful people. After facing up to my fear of being judged, I realized that none of my friends are like that. I’m inventing fear for no reason.

After struggling through several of these crap-I-really-need-some-help moments, I decided it was time to face the music. I started saying yes. It was hard at first.

Then I’d pause, remind myself that it’s OK, and try again. “Can I change my mind?” I’d ask, and extend a hand to them with the diaper bag, or ask them to walk Peanut to the car. The reaction is the same: they smile and hop to it. They’re happy to help. I need to remember that — good people are happy to help another in need.

It’s still difficult to say yes to the offers, and I’m not quite to the point where I can ask for help yet. Maybe someday.

In the meantime, I’ve changed how I offer to help others — mamas who might be in the same mindset as me, afraid to accept a little help.

Instead of asking, “Do you need help with anything?” I go a step further: “What can I carry?” I ask, with a tone that makes it clear I expect to carry something. Sometimes, I just pick up one of their bags and wait patiently for instructions. If I can help one mama to feel more comfortable accepting my help, mission accomplished.

Maybe the next time, accepting a helping hand will be a little bit easier.