Birth with an audience 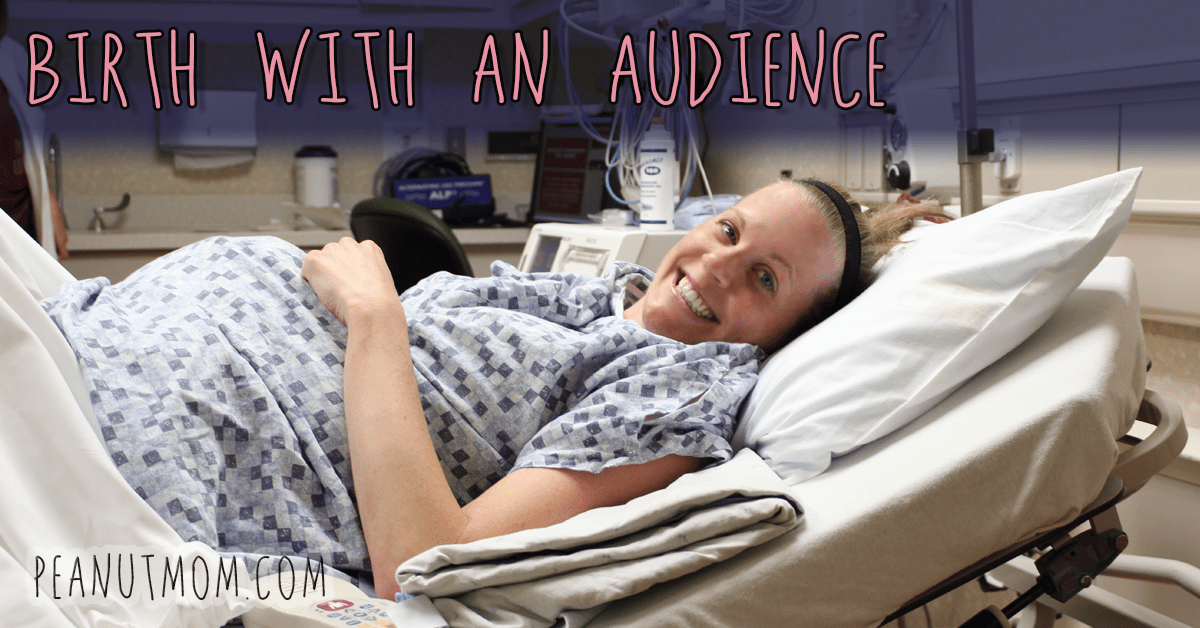 Fourteen different people have watched me give birth. That might sound weird — but I was, and still am, totally okay with it.

I started thinking about my “Party in the Birthing Room” experience after my local mom’s group posed a question to Facebook: “Which of our two hospitals is the best place to give birth?” It sparked quite a discussion.

The first hospital — Mercy — is a true community hospital, an acute care center with a Level III Trauma Center. The other — UIHC — is a teaching hospital and a regional powerhouse. UIHC is a Level I Trauma Center, renowned throughout the state and the Midwest for advanced medical care.

It’s where you go when shit gets real.

The responses to the “where to deliver” question were passionate. Most women responding felt strongly that Mercy was the best because Mercy has no resident physicians. At UIHC, residents typically deliver babies. Others agreed with this line of thinking, saying they disliked the idea of medical student spectators.

I was a little annoyed, because I had both my births at UIHC. I was a little nervous about the extra people beforehand, but when it was said and done, I felt really good about it. In fact, the residents and medical students were part of why it was good.

At my first birth, 8 or 9 people were present during delivery. I say 8 or 9 because I can’t remember; it wasn’t important enough to commit to memory.

The group consisted of a resident physician, Dr. Ponytail, and Morgan, a medical student assisting with her first birth. The faculty MD stood at the back of the melee, and a small cluster of medical students stood to the side, safely out of the way. My assigned nurse, Melissa, and my husband rounded out the group. I think a chief resident was also in the room as well…?

For my second birth, the group was significantly smaller. One medical student, Jennifer (who politely asked if I minded her observing). The resident, Dr. Michael. The faculty doctor, Dr. Wonderful. My dedicated nurse, Kasey, was by my side, as was my husband. About a minute into my pushing, Dr. Ponytail, now the chief OB resident, joined the party.

(They asked if I minded her observing, and I shrieked, “You delivered my first baby! Do you remember me? I’m painless labor girl!” She thought for a moment, then nodded and laughed. “I do remember you!”)

In total there were 6 spectators.

Some women are horrified at the thought of having an audience in the delivery room, which I get. You wouldn’t strip down naked in front of strangers, so why would you let a handful of them stare at your crotch while you squeeze out a human?

But that’s the amazing thing about giving birth: when the moment comes, your body shuts everything else out. Veteran moms told me this ahead of time, and I thought they were crazy. They were right, though. I was so focused on what was happening that the observers just didn’t matter.

I was so focused on contractions and pushing that nothing else entered my consciousness. There could have been 32 people in the room — I wouldn’t have noticed. My ass was hanging out, and I didn’t care. I poo’d a little — both times. I cared a tiny bit about that, but only for a second. I was busy. Very, very busy.

Immediately post-partum, I was deliriously happy, giving my little humans skin-to-skin time. During kangaroo care, despite the violent shaking —  something they don’t warn you about in the prenatal classes; it’s like the worst shivering you’ve ever had, except you’re not cold — I felt like I was on an opium high. I cracked jokes with the residents and med students, especially as they stitched me up (“Hey, you with the needle and thread — pay attention! There should be 3 holes down there when you’re done!”)

From start to finish, I didn’t mind the crowd. I love that both my children helped to teach a new doctor. It’s delightful that there’s a resident physician out there who will always remember one of my babies as her first birth assist.

Even with residents managing my care throughout triage and labor, I felt like I was in capable hands every minute. Would I have preferred the OB I was accustomed to? Of course. I suppose there are residents with crap bedside manner. But throughout both births, I didn’t meet a single one I disliked. They were appropriately serious when needed and fun when warranted, too.

It’s important to note that residents and students aren’t present during labor. They tag along with the resident, who occasionally pops in to check on you. Otherwise, you labor with just your inner circle (nurse and husband for me). If a group of witnesses routinely attended that shit-show, this would be a whole different blog. Thankfully, medical students and residents aren’t interested in hanging out with a laboring, contracting crazy person. They’ve got other babies to deliver. 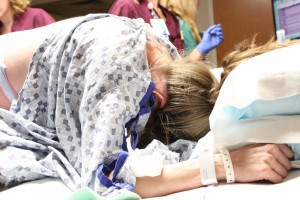 This was me at one of those “my bare ass is hanging out of this hospital gown and I couldn’t care less who can see” moments. There were several other people in the room, but they’d all seen plenty of bare ass. I didn’t care. When it’s your ass, you probably won’t either.

I recognize that I had unique births, but all I can speak to is my own experience. I enjoyed getting to be part of someone’s education. Maybe it’s the NPR dork in me, or the fact that I’m the daughter of a teacher (and a sister to two more), but I believe education is never a bad thing. Why not be part of it instead of a barrier to it?