We have reached the best milestone a frozen embryo transfer girl can reach: 12 weeks.

I think I will leave the picture of Chuck Norris hanging in my bathroom…for now. Mostly because it makes me laugh.

He almost outed me back in December, that sneaky Republican bastard. I posted this photo of Peanut to Facebook, intending to boast about her very first back ponytail. 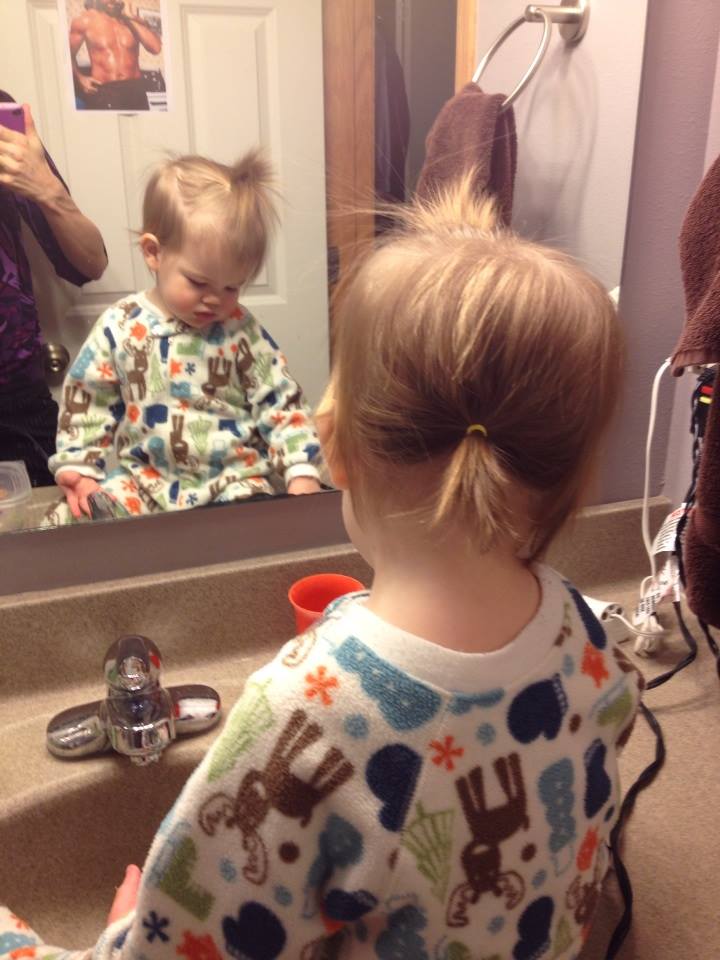 She sat perched on the counter, and I didn’t realize Chuck was visible in the background of the photo. Someone of course asked, “Whoa, is that Chuck Norris?” and I panicked. How could I explain a naked Chuck gracing the bathroom door? My husband jumped in and said I had a weird sense of humor. Everyone seemed to accept that explanation. 🙂

Since November 16th, the day I started my shots, I’ve put 70 needles into those relatively small circles drawn on my arse. Thirty-five 1.5-inch needles per side. Last week, when I gave myself a shot, I couldn’t even feel the needle go in. I’ve lost feeling in a large portion of my upper left glute. (Watch the video of me giving myself a shot here.)

And last week when I played volleyball, I had to hang onto my booty when I ran, because the up/down movement was painful. The classy girl holding her ass, that’s me. 🙂

But I remember how this went last time. It hurts now, and I’ve lost sensation for a while, but it comes back. Full feeling in my booty will return just in time for it to double in size around the third trimester. You betcha.

I’m still having occasional bouts of nausea, and I’m bone tired (I think I’ve been tired for 17 months though so that might be unrelated to pregnancy). Peanut isn’t very sympathetic toward my growing belly. She sat down on it, hard, last Thursday night while we were playing on the floor.

She got a stern ‘No no, we do NOT sit hard on Mommy!’. After that, I kept both hands protectively over Squeak’s hiding place and worried for two days.

I’m noticing the effect now of being off my antidepressant for 2+ months. Just like last time. It’s not fun; the paranoia is pretty gnarly and yesterday I bawled at two commercials in four minutes. But like before, letting the people around me know what’s going on. It’s different than last time I went through this. I have a new boss and my office has moved to an entirely different building. But luckily el Jefe Nuevo is very understanding of my crazy-pregnant-girl ways. That helps. I’m also doing mindfulness (aka mindful meditation), which despite my not practicing it every night, it does help a little. Especially with  my sleep.

Next up: Squeak’s 12 week photo shoot on Friday afternoon. I can’t wait to see him and make sure all his little organs are present and accounted for (though we will not be looking for a peener, mind you!). I’ve been so much sicker this time, I keep worrying that my body is trying to tell me something is very, very wrong.

That’s anxiety for you. She says the worst things. I can’t always shut her up myself, but if we have a good ultrasound on Friday, I think she’ll shut up for a while. 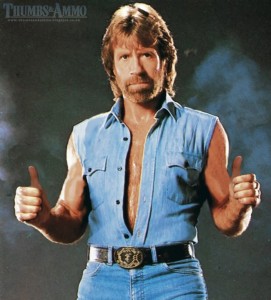 Because, come on, you can never have too much Chuck Norris.