And Then There Were Two 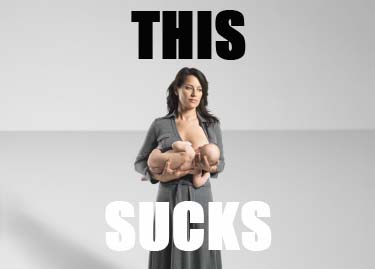 I haven’t blogged in a while, and I am fully aware of that. In fact, I’ve written just one blog since Squeak was born and that was his birth story (part of which I wrote a few days before his birth, since it starts with all those fun false labors).

So why the hiatus?

To be frank, this two-kid business is no joke.

In fact, this job, as a parent of a newborn and a toddler, is really, really hard.

I have all the same stresses and time constraints I had when Peanut was born — many of which I had forgotten: going through 16 diapers and 2 changing pad covers a day, thanks to the multitude of newborn sharts Squeak delivers. The never-ending string of middle-of-the-night wakings, which meant he awoke to eat every 90 minutes all night long.  (We’re at 5 weeks now and Squeak usually gives us one 3.5 to 4-hour stretch each night. Thank god.) The witching hour fussiness that’s only abated by back-breaking bouncing, carrying, and swinging (and sometimes even that won’t work).

Yes, it’s all the normal newborn stuff. Par for the course.

The tantrums are frequent and epic. The opinions are many and completely irrational (PINK SANDALS! I WANT THE PINK SANDALS!). And while she does communicate with us, most of her words are still incoherent (uh-ay = cupcake; bee-ya = blanket), so we spend most of the time trying to figure out what’s pissing her off as opposed to actually knowing what’s pissing her off. One day she’ll happily climb into her new double stroller. The next, she acts like the seat is burning her with a hot poker. She’s exhausting.

(And adorable at the same time. It sounds impossible, but seriously, she’s so stinkin’ cute sometimes that it melts my heart. When I don’t want to throw up my hands and sell her on craigslist, that is.)

If I didn’t have a husband who was 44 years old, I probably would have waited longer to bring Squeak into our family. Maybe 6 months more, so Peanut would perhaps be potty trained (a Size 1 diaper and a Size 5 look the same when they’re in the depths of the diaper bag, and inevitably the first one you pull out is never the right size). But I married a man almost 11 years older than me, and if I wanted our kids to be out of high school before he drops dead, I had to move things along. *sigh*

When I was pregnant with Squeak, I posted online about Peanut’s tantrums (which kicked in at 18 months, when I was already in my second trimester). A friend commented something to the effect of, “Yeah, I saw that you were pregnant and thought, ‘Wow, she got pregnant before her toddler turned into Satan.'” How true that statement is, and continues to be. Sometimes I think Peanut is possessed.

I am feeling pretty good now. After a pretty gnarly bout of PPD in the weeks immediately after Squeak was born, I got myself sorted out. My ability to handle stress is much improved over where it was, though I’m still not 100%. I am avoiding most situations where (and people around whom) I can’t speak freely. The last thing I want right now is to be around people who might piss me off, because my ability to censor myself is compromised, and on top of that, I’m pretty sensitive to just about everything. But it’s getting better.

Our two-kid situation has led me to make some decisions differently this time, with nothing but pure survival in mind. With Peanut, I had a strict “no baby in the bed” rule. I was terrified of smooshing her, blocking her little airway. I nursed her on the sofa, and if she refused to be soothed in the wee hours, one of us laid with her on our chest on the couch or in the recliner, sleeping fitfully if at all.

I admit it: with Squeak, we do a lot of co-sleeping. (Add co-sleeping to the list of things I said I would never do as a parent, including ‘let my kid watch TV every day’ and ‘buy a DVD player for the car’.) I didn’t think I could stand co-sleeping. But when it’s 3:30am and he wakes up for the 10th time that night, and I realized that he nurses more calmly in the sideline position, and that I can sleep while he nurses, and that he snoozes twice as long when he’s next to me, and that it’s virtually impossible to roll over on him if I position my body correctly… hell, co-sleeping it is. I was surprised to find that it was actually much easier than I thought. We all sleep better, and that’s worth a lot.

(I know some of you think I’m crazy, but you might just do the same thing when Baby 2.0 comes along. It’s all about survival. You might change your tune. I did, and never thought I would. Besides, I follow the Safe Sleep 7, so I’m not stupid about it.)

Well, the very small amount of free time I had to blog is over. Squeak is crying and I’m the Lady with the Boobs, so it’s time for me to get back to work.

One quick note before I go:  Squeak started smiling last week. He scrunches up his eyes and the corners of his mouth turn up, and I love it. He’s awesome.

(Forgive me if I blog infrequently these next few months; I’ll do the best I can while things are crazy. Hopefully I’ll get back into a rhythm eventually. Wish me luck.)