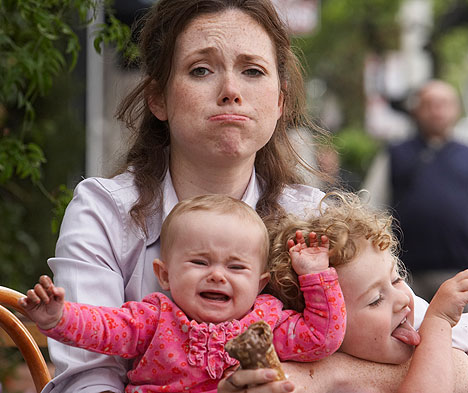 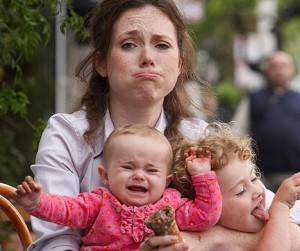 This is me a lot of the time, except I haven’t showered and the toddler would have ice cream all over her face. I’d probably have a boob hanging out by accident, too. Parenting FTW!

Tonight marks the fourth 24-hour period I’ve been alone with both kids.

Well, technically Peanut has gone to daycare each day, and the weekend days I’ve had helpers (thanks, Mom and Dad!). But make no mistake — even though I’m only doing mornings and evenings, it’s still plenty difficult to juggle a two-year-old and a newborn all by myself. It kinda sucks.

But with every passing day, my confidence is growing.

Case in point: the difference between my first night alone and the second night.

The morning of Day One was great. Everyone was happy and I got Peanut off to daycare without many issues. The trouble started around 5pm, when I picked her up. The daycare center is walking distance from my house, so I walked there with Squeak in a carrier, pushing a stroller for Peanut to ride in (walking any significant distance with a toddler is excruciating… they’re like a dog in a room full of squirrels). I asked her to get into the stroller, but she ignored it and asked for water (I had none of course). I let her walk, but told her once we left the walking trail and entered the neighborhood with its busy streets, she’d need to hold Mommy’s hand.

Mere moments later, Squeak started screaming and kicking. I took him out of the carrier and laid him in the stroller, tightening the straps over his shoulders. As we neared our street, Peanut realized Squeak was in HER STROLLER and tried to climb in on top of him. When I denied her this want, she threw herself onto the concrete in Full Tantrum Mode. A couple of neighbors were outside their homes just a few feet away, witnessing the scene. When they saw me battling both a screaming infant and a screaming toddler, they backed away, but offered help if I needed it.

I took Squeak out of the stroller, laid him in the grass, and put the carrier back on. Once he was wrestled in, I picked up Peanut (no easy feat with a carrier on my chest) and pressed her into the stroller, trying to keep her kicks and flailing limbs from striking her baby brother. The first time was a failure — I had forgotten to lengthen the straps, and I had to try a second and then a third time to get her in. After what felt like an eternity, both kids were secured. They were crying and screaming, but they weren’t going anywhere.

I started toward home, and the moms who had witnessed the debacle cheered: “You did it, Mom! Great job!” They high-fived me as I passed, sweat dripping down my back.

The rest of the night was worse — a fussy baby and defiant toddler is a bad combo. When everyone was finally asleep, I collapsed into bed without even brushing my teeth.

The next day, I resolved that THIS WOULD NOT HAPPEN AGAIN.  I took a full sippy cup and a snack to daycare pickup, and when she asked for water this time, I said “I brought you some water, and a snack, but we only eat snacks in the stroller.”

To my delight, she climbed in and started buckling the straps herself. JACKPOT.

The snack was the difference-maker. She was a delight the rest of the evening, and even Squeak had a great evening, with only a little witching-hour fussiness.

When bedtime was over and both kids were tucked into bed, I took a deep breath and exhaled. I CAN DO THIS. And I can do it pretty well, too!

Every day we’re alone, my confidence builds a little. We have setbacks, and they aren’t fun — like tonight, when Peanut refused to leave a neighbor’s yard and I had to fling her over my shoulder and lug her home… I administered a Time Out as soon as we arrived. BAD TODDLER.

Yes, the TV is on sometimes (I needed to bathe Squeak last week, so Daniel Tiger did a bit of distracting so I could accomplish it without Peanut tugging on my arms, screaming with jealousy), but most evenings we spend a lot of time outside, playing or coloring on the driveway with chalk.

I’m not the kind of person who takes every challenge in stride. I tend to be pretty high-strung. When I am ready to lose it, with both kids nearby, I find some other way to get my frustration out. I broke one of those stupid plastic air vent covers last week, after kicking it off the air vent for the ninety-four-millionth time, so I threw it across the room (neither kid was in the room with me; I’m not dumb enough to lose my temper in front of them). That first night, I put a screaming Squeak down in his bassinet and walked away. I needed a minute to collect myself, because I could feel my patience disappearing. (I only needed four minutes to get a grip, and I was back on the job.)

My point is this: being alone with both kids is not fun. I dread it. But I also feel pretty good when I get both kids tucked into bed without anyone losing a tooth or me losing my mind.

The best moments are the “Crying in Stereo” moments: when both kids are screaming, and I’m standing between them, trying to decide who to soothe first. Surprisingly, these moments are more likely to make me laugh than cry. With the cacophony echoing around me, I pump my fist in the air and shout, “WOO HOO! PARENTING FOR THE WIN!” I wish someone was there to videotape the melee, because it would make great video to show in sex ed class as motivation for safe sex.

The true test is coming next month, when I have them from sunup to sundown sans daycare. Or when I take both kids on an outing away from home (we haven’t done that yet either). I’ll get to these challenges, and I’m sure I’ll screw it up a few times before I figure out how we’ll accomplish these things as a Party of Three.

This is my life though. With a husband who travels as much as mine does, I better get used to it quickly.

Regarding the juggling act of managing both a toddler and an infant, I read somewhere these words of wisdom: “It doesn’t get easier — but you get better at it.”