Two things I am really, really bad at 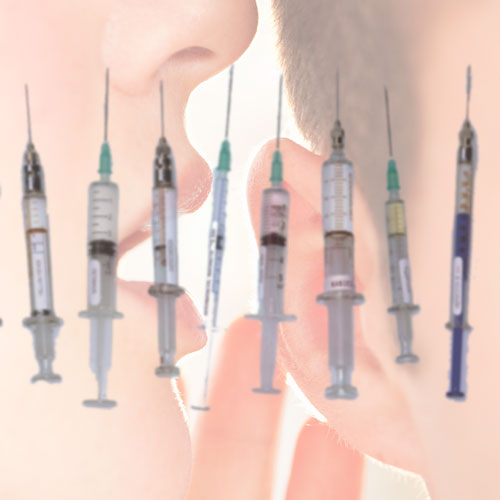 This past Saturday, day one of my PIO shots, I couldn’t do it myself. In my meager defense, I was running a 101.6 temperature and was miserably sick. I thought, “Crap, this is going to be hard enough when I have all my wits about me. Should I really be doing this when I’m in a shifty mental state?” (Example: earlier that evening, I started to put on Peanut’s coat. As in, I started to put it on ME, before realizing it was her coat and not mine. Later I put a diaper in the refrigerator instead of the trash. I was several bricks short of a load.)

My answer was no — I’d better wait.

Luckily, my neighbor was home, and she’s a nurse, and she stopped by to give me a poke in the butt. It didn’t hurt at all (the injections delivered by my husband hurt a LOT more… I’m not sure why).

So I still haven’t sucked it up and given myself a shot. But this Friday, I’m going to have to suck it up and do it. And I won’t be able to piddle-fart around, either. I’ll have just about 45 minutes to pick up Peanut from daycare, get her fed and changed, and do the shot. Then we’ve got to get on the road to a football game, 90 minutes away.

Chickening out is not an option, because the people at the football game will be family, and none of them can know about the shots. We’re keeping it secret from them this time. Or trying to.

Early on in this whole IVF #2 thing, we decided we would keep it all a secret. As I mentioned here, I wanted one of those big tear-inducing reveals when we finally told everyone that we were pregnant.

I already knew that this was going to be really hard for me. I suck at secrets.

I planned to only tell two people — my boss Jane and my coworker, Allie. I figured that these two would be the first to notice if I was acting like a crazy person (yay hormones!) and the first to be affected if I was devastated by bad news. But I ended up telling more people at work, most of them on a particular day when I was feeling really, really anxious. In fact I think there are probably just a few out of the 12 people in the office that don’t know. Oops.

Why am I so bad with secrets? Is there some reason that I can’t keep my big mouth shut?

Kind of. My therapist calls me an “auditory processor” (I sound like a computer part, don’t I?), meaning that I process my anxiety by saying it out loud. She’s right — when I’m dealing with something bad, I feel a load off my shoulders when I share it with someone else (this is also why I see a therapist; it works for me, obviously). And IVF is nothing if not anxiety-producing. (Kudos to you women who don’t stress about it. You are stronger than I.)

So at this point, the office knows. Five of my close friends know. My neighbor knows. But absolutely nobody in our family knows. In fact, I’ve been intentionally throwing them off the scent, just for fun. Surprisingly, it hasn’t been that hard.

For example, two weeks ago I visited my mom. “Have you got your husband talked into another baby?” she asked almost as soon as I was settled in.

I shrugged and was intentionally non-committal. “I don’t know. He’s not on board yet, and honestly I’m not sure he ever will be. I’ll keep trying, but I can’t get my hopes up. We’ve got time though. There’s no hurry.”

(I turned away from her to hide my smile. Tee hee!)

Something similar happened when my inlaws visited this past weekend. I gave an equally “Oh, man, I don’t know… better not get your hopes up!” type of answer when my mother-in-law asked the same question. It was awesome.

So why did I spill my guts to my coworkers, but not Mom or MIL? I’ve learned something recently: it’s easy to keep a secret from people when you know that this secret, once they know (we hope to wait to tell until we’re really-super-duper-for-sure pregnant, sometime around 12 weeks), will make them so stinkin’ happy. My mother in law is going to SHIT. I can’t wait to see her reaction.

It’s hard not to tell my sisters. I don’t hide anything from them. If there’s something they don’t know about me, it’s not because I am hiding it. More likely I just forgot. Otherwise, I’m an open book.

Being a closed book is taking some getting used to. I am going to try as hard as I can not to screw up. When I go to my grandma’s for Thanksgiving, I’ll hide my needles and take my PIO shots behind closed doors. I’ll pretend I’m Mrs. Smith (from my favorite Brangelina movie, Mr. and Mrs. Smith), leading a double life where I can’t tell anyone that I’m really an assassin.

Okay, I’m exaggerating. Really I just want to be Angelina. Do you blame me?

*Not his real name. Sorry!