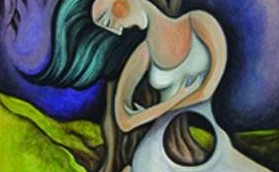 On this day two years ago, I had an embryo transfer that became our first pregnancy. Thirty-five weeks later, it brought us our little Peanut.

I started spotting yesterday, just a little bit of brown spotting off and on. This morning there was no new spotting, and at noon still nothing. I started to breathe a bit easier.

Around 2:00pm, I was eating lunch at my desk, reading the IVF Diary on the New York Times (oddly, I was reading about another woman’s miscarriage). I picked up the phone to make a call, but something stopped me. I put the phone back in its cradle.

I felt strange. I could feel something odd down south, and as I sat there quietly thinking, I realized the sharp pain that had made me catch my breath a few minutes earlier was a cramp. And then I felt another one.

Walking quickly to the restroom, I tried to convince myself that I was overreacting. There would be nothing there… I was being a crazy person.

But this time, I wasn’t crazy. The bathroom stall brought the frightening discovery of bright red bleeding. I walked straight to my coworker’s office, Jenny, who had experienced multiple miscarriages. She happened to be talking at that moment with another coworker, Nina, who had also miscarried twice. They noticed my stricken face. “What’s wrong?” Jenny asked.

“The spotting. It’s back and it’s bright red. And I’m cramping.” My voice was shaking.

“Have you called your doctor?” she asked. I shook my head. “Go call your doctor,” they both said, nearly simultaneously. I walked to my office, closing the door behind me, and called the IVF clinic.

The nurse could sense the panic in my voice, and calmly advised me to go home and lay down. There was nothing we could do now; I was still too early. They could move up my ultrasound, which was currently set for Thursday morning, to Wednesday afternoon. Any earlier and it could be inconclusive. There was no reason for another beta, since having nothing to compare it to would render it useless. She was concerned and kind. She asked me to please drive carefully.

I thanked her and said goodbye, wiping the tears from my face and gathering my purse and coat. I told my boss I was leaving, and called another coworker to let him know I’d miss the afternoon meeting. Both were gracious and told me not to worry. To take care of myself first.

I tried not to let the other drivers see me sobbing on the way home. Getting it all out in the car was good — I was fairly pulled together by the time I arrived home to a nervous and worried husband. I told him everything the clinic said, and he brought me my laptop and a glass of water so I could watch movies in bed. He closed the bedroom door to keep Peanut at bay.

The cramps were awful. They actually made me gasp a few times, unlike any menstrual cramp I’d ever felt. I got up to pee halfway through the movie, and there was no mistaking it — this was no false alarm. I saw a great deal of blood and clots (sorry to be graphic, but that’s the reality here).

I laid in bed for a little longer, watching Little Shop of Horrors. My husband was wonderful, keeping Peanut busy and giving me privacy. I tried to find the bright side in this horrible situation.

It’s better, I suppose, that this happened just 1 week after our positive test, rather than 8 or 10. We had so little time to get used to the idea, and hadn’t told many people. And since most miscarriages are the result of chromosomal abnormalities, I can’t very well say that I wish it had continued. I will trust nature to make that call. I won’t like it, but I’ll trust it.

On the other hand, this completely sucks balls. When I got pregnant with Peanut, EVERY SINGLE FREAKING SIGN pointed to the fact that I was going to miscarry. A 13 beta, followed by a 21, and a 75?! Come on. The nurses to this day are shocked when I tell them that my brown-eyed toddler started out as a 13 beta. It was a statistical miracle that I stayed pregnant.

This time, everything was sunny side up. The first and second betas were awesome. I felt pregnant even during the two-week wait. There was no reason to believe anything would go wrong. Squeak probably developed normally until the missing or abnormal chromosome was needed, at that point my body said, Oops, this one is missing a part, kick it out into the reject pile. Bye bye, Squeaky.

I’m sad. Not because I mourn the loss of a potential human (I haven’t [hadn’t?] really developed that kind of attachment to Squeak yet). I’m sad because if this really is the end, we have to start all over. Every pill, procedure, ultrasound, and injection must be repeated a second time, on top of a delay of at least six weeks (the clinic doesn’t do IVF between mid-December and mid-January).

We’re trying to focus on the bright side. It’s tough, but doable. And now I’m preparing myself to be part of the club of women who’ve suffered a miscarriage. At least I’ll be able to relate to my friends and loved ones if they end up going through this same crappy situation.