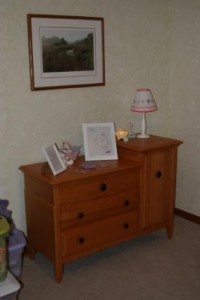 (This was the dresser that tipped over and killed a three-year-old girl. Looks innocuous enough. Don’t let your own furniture fool you into thinking it’ll never hurt your babies. Better safe than sorry.)

A friend posted a link on Facebook earlier this week. It linked to a blog that had made the rounds last winter, but I’d never seen it before.

It was written by a mother whose 3-year-old daughter was killed when her dresser toppled over on her. That morning, the little girl had awoken and called out to her mom, who told her to go back to sleep. Some time later, she was playing in her room while the rest of the family slept, and the dresser fell on her. Nobody heard it. She didn’t cry out. Her father found her a short while later, blue, cold, and already gone.

The blog told the story of that awful day from the mother’s perspective. I couldn’t read it in its entirety; after the first few paragraphs, my stomach began churning and I started shaking. The message of the blog: secure your fucking furniture to the wall, no matter how certain you are that it can’t be tipped over.

A friend told me recently about a woman she works with. Several years ago, the woman took her 3 kids with her to drop something at a friend’s house. They were in the car, in their car seats, while she ran to the front door. In that moment, one child crawled/fell out of the car while a second knocked it into neutral, backing it up over and crushing the first. The mother witnessed the entire thing.

A coworker told me about some random affliction that can kill your baby if they’ve ingested water at the pool. If they aspirate too much and then lay down within a few hours, they can drown. They show few symptoms, then go to sleep and never wake up. I don’t know how rare it is. I’ve never heard of it. But it’s apparently out there, killing babies.

Now that I’m a mom, I can’t read the news anymore. I stick to NPR, where the awful, horrible things people do to each other are limited to the major stories only. On NBC News or Yahoo News, the headlines always contain something awful that has befallen a child. Today’s doozies:  “3 dead in Michigan golf team van crash” and even worse, this horror: “Police investigate newborn found on Oahu beach.”

Growing up in the 80s, we didn’t have a single piece of strapped-down furniture in my house. Children who died were victims of farm accidents (a young boy who fell from a tractor), car wrecks, unsecured swingsets (a little girl was crushed when her swingset fell on her), or backyard swimming pools.

The same crap is killing babies today, 30 years later, despite us taking so many more “safety measures.” We strap down our furniture, pad sharp corners, put a squishy cover on the spigot in the tub, take CPR classes, recall every baby item that might be misused, secure our babies in $300 car seats, mandate back-up cameras in every car, and have added “did you leave your baby in a hot car?” signs at the entrance of Wal-Mart.

The worst — absolutely, undeniably the worst — part about being a parent is the fear. The all-encompassing, earth-shattering, paralyzing fear. It takes hold of me, my heart, often. On days like today, when I can’t stop thinking about that blonde pixie crushed under her dresser, breathing is difficult.

After reading the blog from the distraught, grieving mother, I went straight to Amazon.com. I bought 16 furniture straps and a special set of straps for our flat-screen TV. Paranoid parent? Yes. That’s me. Right here.

I don’t ever want to let her out of my sight. I know I should be more relaxed, but I just can’t. Yes, I’m what’s wrong with the world — helicopter parents, blah blah. I don’t care.

She’s almost nine months old and I still crawl into her room every night before I go to bed, just to make sure she’s okay. I don’t really think anything could happen in there… but that grieving mother thought her daughter’s dresser was too short and squat to tip over. I’m taking no chances.

I am not naive enough to think I can keep all of the world’s dangers away from my beautiful baby girl. But armed with sixty bucks in safety devices, cabinet locks, outlet covers, and a cordless drill, you bet your ass I’m sure as hell going to try.