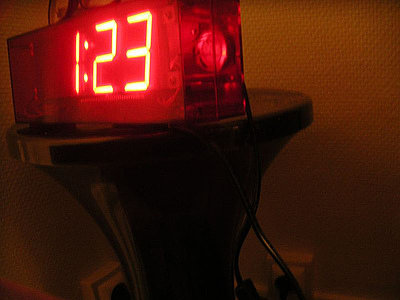 My little Peanut has slept through the night, without waking, for seven nights straight now. She’s 10 months old.

Since February, most nights she’d wake up twice. The first around 10:30pm, and she was inconsolable. Nothing would soothe her — bouncing, singing, walking… she kept crying until I would break down and nurse. She’d calm immediately and after just a few minutes, I could lay her down and she’d immediately go back to sleep.

At her 9-month appointment, we mentioned these wakings to the doctor. “They sound like night terrors,” he theorized. “Just before her typical wake-up time, try waking her up yourself. Pick her up, cuddle a little, and put her back down. Just enough to disrupt her sleep pattern.”

We were skeptical, and in agony at the thought of breaking our “never wake a sleeping baby” rule. But it worked the very first night, and every night after that. Amazing!

Despite dropping her first wake-up, she’d still pop up around 1:30am. We tried rubbing her back, my husband tried taking a turn, but to no avail. She’d get more worked up until she was hiccuping between screams and flinging her head against her crib rails. I’d give in and nurse her for two minutes — literally, I watched the clock — and after, she’d be back to sleep in an instant.

At the same doctor’s appointment, the doc explained that she didn’t need a middle-of-the-night snack for nutrition anymore. It was behavioral now, and we could stop at any time… if we wanted.

I considered it, but couldn’t pull the trigger. Early on in her little life, we tried letting her cry it out (much too early it turns out), and it nearly killed us both. My husband sobbed almost as loudly as she did.

So we continued our routine: her waking up in the wee hours of the morning, me stumbling into her room, nursing for two minutes, and putting her back in her crib. She’d roll onto her side and stick her thumb in her mouth, already halfway to Snoozeland before I lowered her onto the mattress.

About a week before the 10-month birthday, she started occasionally sleeping through her midnight snack, and I was elated. And dying to tell someone. But I kept quiet. That I was still nursing my nearly one-year-old daughter at 1am was embarrassing.

Actually, I wasn’t personally ashamed of it, but I was fairly certain others would tell me I was doing something wrong. I felt embarrassment because I was pretty sure I should, not because I actually did. I assumed other moms would laugh, telling me to suck it up.

But back to present day, and seven straight snack-less nights. My milk production has dropped now that the midnight feedings are fewer, and I’m pumping less at work as a result. I’m a little sad. This is the beginning of the end of nursing my little Peanut — something that, while difficult at times, is one of the most rewarding parts of having a baby (for me).

The one thing I’ve learned about parenting in my short tenure is this:  there are lots of choices for me to make. Some of them, if made badly, are certain to affect my child negatively, and others, no matter what I choose, will have no lasting long-term effects.

Midnight nursing sessions with my 10-month-old falls into the latter category. Sure, she could have a longer stretch of sleep if she wasn’t waking up to eat, and better sleep equals a less grumpy baby (not to mention a less grumpy Mommy!)

But to my knowledge, no major behavioral or physical afflictions have been tied to extended breastfeeding (in fact, the opposite is true). Until they make that tie, I will enjoy this precious time. It’s cliche, but it’s true when they say it will all end way too soon.