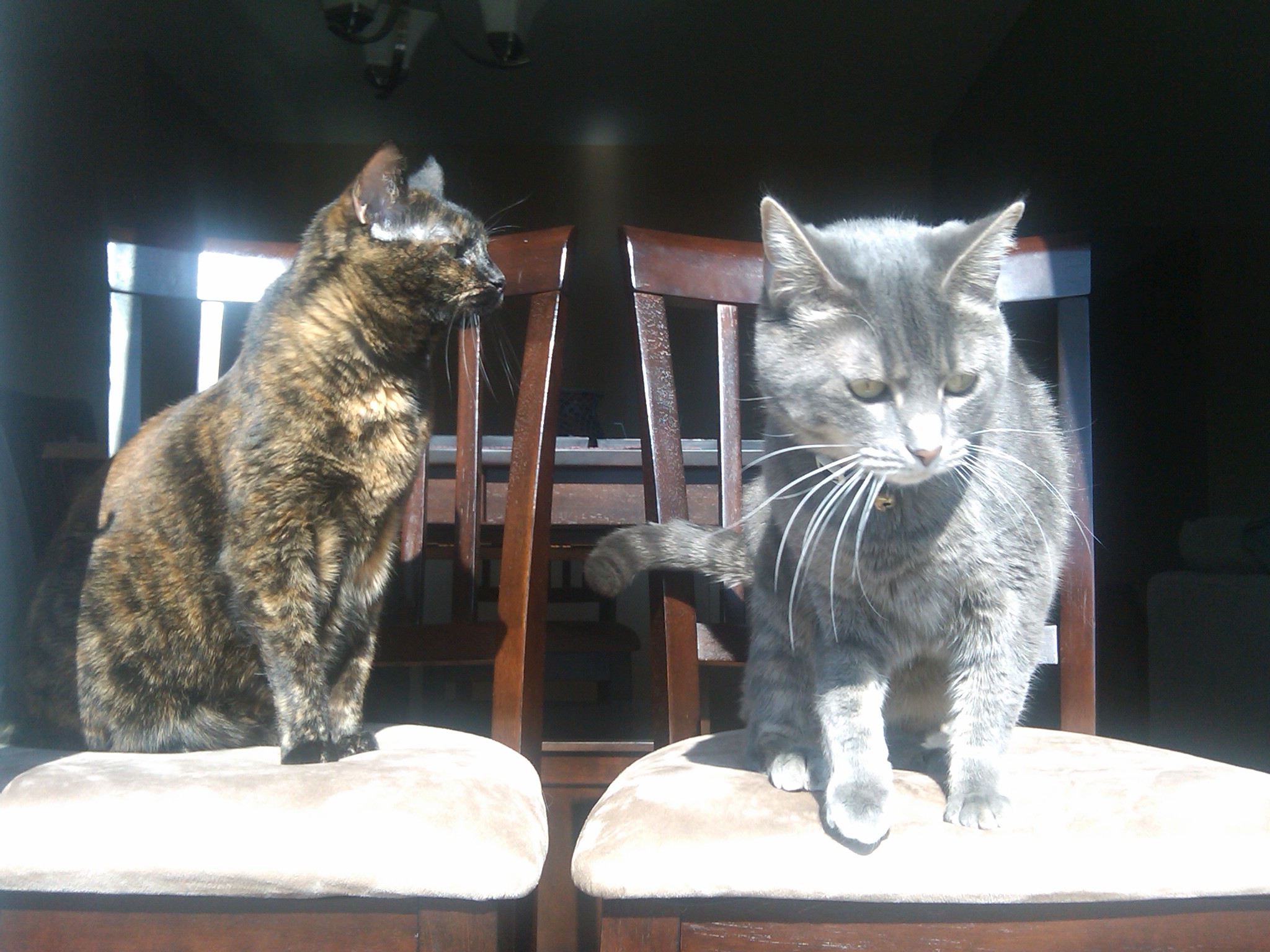 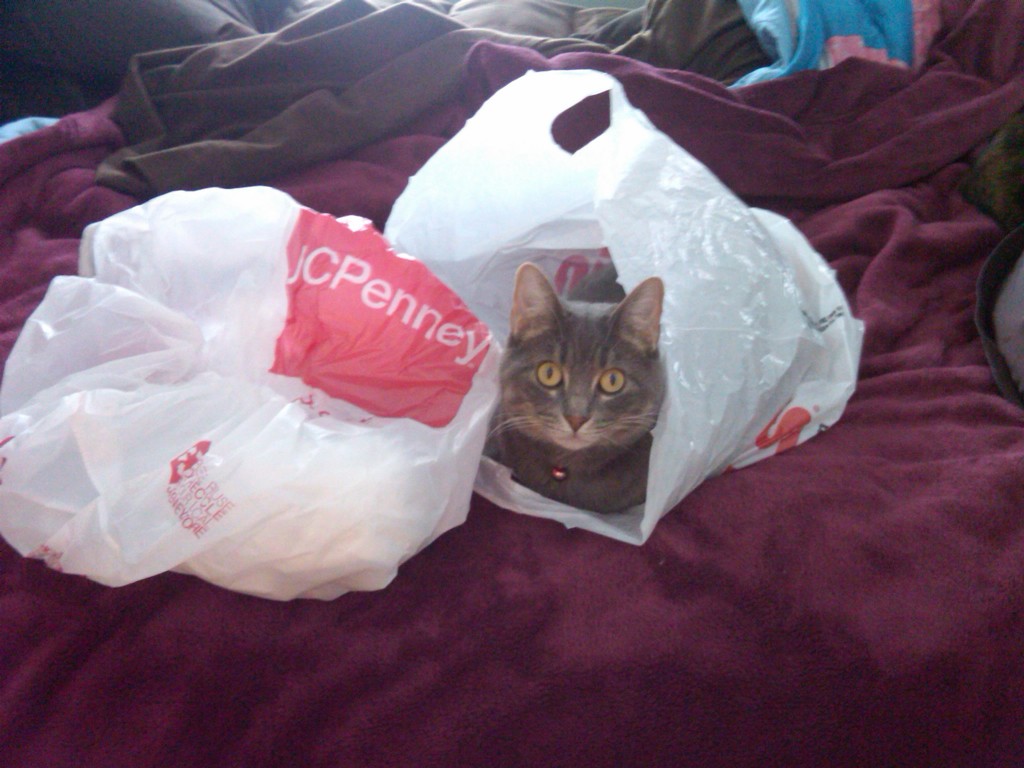 This is how stupid Simon is. Doesn’t he realize this is a suffocation hazard?

Note: I realize this is two housepet-related posts in a row. It’s just a coincidence, I swear! I’ll try to be more original in the future. 🙂

Everyone told me that poop and pee would suddenly get much more important when I had a baby. They were right, but not in the way I assumed.

Yes, I concern myself with my daughter’s poo (Is it the right color, consistency, frequency?) and pee (How many diapers is she soaking every day? How is it possible that a girl baby can shoot pee across a room?). But the new poop and pee concerns in my world are coming from a surprising source: my four-legged family members.

(Well actually, there was one incident with my husband’s pee, but that’s another story.*)

It seems that my furry family is unhappy with the state of the union at home. And they’re showing me in the only way they know how.

When Simon was a few months old, and I lived alone in my condo pre-husband, I discovered his penchant for sending messages via Pee-Mail. I traveled for work, and the first time I was gone overnight, I came home to a pee-soaked bed.

(Discovering that at 11pm, when I was climbing exhaustedly into bed after a particularly harrowing flight home, was super.)

Fast forward several years; my husband and I bought our home and both kitties came with. We spent a lot of money finishing the basement, which included new carpeting in a large family room. All 3 litter boxes were in the utility room, situated at the back of the basement. To get there, the kitties walked through the family room.

After a few months, we noticed that the basement smelled like cat pee – not just near the utility room, but the family room also. Because the shade of the carpet was just the right (wrong?) color, it was months before we discovered that Simon had been marking around the perimeter of the family room for nearly a year. Cat pee, if you aren’t familiar with its qualities, is like a Sharpie – it’s good for marking things if you want the mark to stay there FOREVER.

(Lucky for us, our basement flooded slightly a few months later. Our homeowner’s insurance paid to replace the carpet, and we put up the extra cash for a new pad to eliminate the pee. Then we closed off the basement to kitties, put the litter boxes in the closet under the stairs, and made a little tunnel for the furballs to access their potty area. It’s pretty genius; completely invisible from the top of the stairs and the boxes out of sight and away from the living areas!)

So it’s established that Simon is a bad, bad kitty. 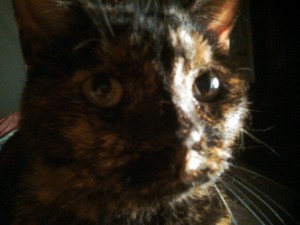 Therefore I was unsurprised when on Saturday I saw Simon stroll into the living room and pee on the baseboard. I grabbed the squirt bottle and gave him 5 or 6 good squirts before he ran off. I cleaned up the mess, shaking my head and contemplating recipes for cat soup. My husband cleaned out all 3 litter boxes, scrubbing them and refilling them with new litter, hoping that would help. We also resolved to start Simon back on his kitty anxiety meds.

Kitty, our dog, hasn’t had an accident since he was a puppy. But last week I stepped in a little wet spot in my closet, still warm from being deposited there. It was quite a bit of pee; obviously an “I needed to go” puddle and not a “take that, owner!” statement. And since dog pee smells much less offensive than cat pee, I knew it belonged to Kitty. I scolded myself for not paying attention to his signals (he rings a bell when he needs to go, but lately he’d just been standing by the door silently), and vowed to make sure he’d gone potty more often from now on.

A few days later, I sat down at our office computer and set my sock-feet down in a very large puddle right on the chair mat. Clearly dog pee, and a lot of it. I cleaned it up, puzzled, and once again vowed to watch Kitty carefully for signs he needed to go out. I told my husband what I’d found, and three hours later, he sat down at the same computer and discovered another puddle.

We researched “dog peeing inside with new baby” and found that the stress on Kitty was probably causing his deviant behavior. The routine he was used to for 3 years was completely wacked out, and it was affecting his doggy psyche. We decided not to shush him so aggressively when he barked at passersby, and to give him more walks than usual to try and combat it.

So two of my animals have turned against me. At least I still had my sweet, shy Panda who behaved. Right?

Until yesterday, when I discovered her peeing in the corner of the living room. Our TV is situated kitty-corner (ha ha), and there’s an empty space behind the TV stand. I heard the pee hit the carpet and jumped up, squirt bottle in hand, and started squirting behind the TV before I could see who the offender was (who I assumed was Simon). When I peeked over the TV and saw it was Panda, I was shocked. This was new!  She ran off, sulked and licked her damp fur for a while. A few hours later I discovered a new spot on the bathroom rug.

I can’t win. But at least Panda’s accidents aren’t marking – they’re not on vertical surfaces, like Simon’s. So that tells us something: that it might be biological, not necessarily behavioral.

We moved one of the litter boxes upstairs, so Panda doesn’t have to go all the way downstairs to potty.  Simon is just a lost cause all the way around. He’s got a bell on him so we can track his whereabouts, and I bought a new blacklight so we can find and clean his little accidents. Kitty’s going to get more walks and more attention, and less shushing.

But if you come over to visit and have a fleeting thought of “Hmm, it smells like pee in here,” embarrassingly, you’re probably right. The real challenge is to figure out whose pee!

*My husband was attempting to pee yesterday while wearing the Baby Bjorn – a carrier whereupon Peanut is strapped to his chest. Baby blocked his view of the toilet, and while trying to pee blind, he of course half-peed on the floor. He could hear the water splashing, and thought he was on target, but had no clue a split-stream was taking place, sending a small stream to the floor. I walked in on his potty break to clip Peanut’s pacifier to the carrier and stepped right in his mini puddle. Awesome.

P.S. We took Panda to the vet later the same day I posted this; her peeing was so uncharacteristic and I was worried. I’m glad we did, because she was dehydrated and suffering from a kidney infection. A shot of antibiotics and another of prednisone later (and some sub-q fluids), and she was good as new. And peeing in the box again, too! Yay! And we’ve had no more pup accidents either since adding more exercise to Kitty’s day. 🙂

P.P.S. – Our Panda girl was very sick and didn’t get better. Read about the gut-wrenching decision to end her suffering here.