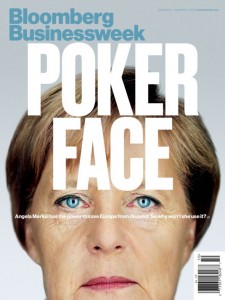 (Make sure you say that right. It’s “ON-gull-uh,” not the typical American pronunciation of “ANN-jul-uh”. Pretentious, no?)

On the cover of Bloomberg Businessweek today was a giant picture of the German Chancellor, better known as the woman who holds the purse strings for the wealthiest nation in the Euro Zone. Inside, they extrapolated on the person behind the position. In short, she’s a lady with a lot of power.

And she has no children.

This makes me sad, mostly because these strong, intelligent women are exactly the kind of women who should be procreating. We could stand to have fewer Whiskey-Tango babies, and more critters coming forth from the best and brightest among us. Sorry if that offends, but how can we evolve as a species if the majority of our population comes from the bottom rung of the brainy ladder? But I digress.

A study from the University of Chicago, released last year, drew this well-known conclusion:

Men and women have nearly identical incomes and working hours once graduating from college, but 15 years later the men’s incomes soar to 75 percent more than the salaries of women, according to the study.

But there’s an exception to this rule, the study found. This does not apply to the small group of women who have never had children. For childless women, their pay equals that of their male peers. Studies also show that your chances of hitting 40 and not yet having children can be predicted partially based on your education level.

So what is society telling me?

Master’s degrees, for women, should come with an IVF starter kit. Because those of us with advanced degrees are more likely to wait longer, and have trouble conceiving, and need to fall back on assisted reproduction. That was DEFINITELY not in the brochure for my MBA program.  🙂

Lucky for me, I have already decided I have zero desire to be a CEO.  The pressure, the hours, and having to bite your tongue when you’re in the board room with the massive egos of the men who ARE in charge… Yeah, not really my strength.

So long as I get to be the woman in charge of something someday, to make decisions and have a say in the way things go… I’m content with that.

But I know women who are struggling with this. They’re skyrocketing up through the ranks of their companies, getting promoted every few months and making things happen. They’re also hearing their biological clocks ticking, but putting on the earmuffs. They’re hoping they can take their chances, ignoring the ticking clock until they’ve reached the top. Then, they say, they’ll settle down and have a baby. 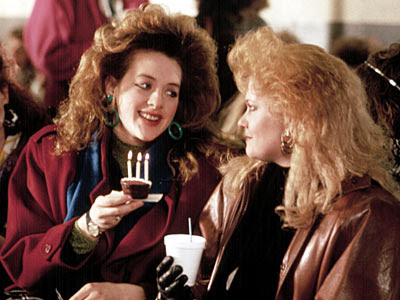 The best part of Working Girl was, by far, the hair. Holy Aqua Net!

I know where they’re coming from. Achievement and recognition are like drugs. Once you get a little bit, you only want more, more, more. It’s hard not to keep striving, to say “If I never get much higher than this, I’m okay with it.”

Another study, this one just a few years older, says that 42% of high-achieving women in the corporate world are childless at age 41.  Compare that to high-achieving corporate men: only 25% have no kids.

But those women made that decision consciously, right? They knowingly gave up having kids and are probably happy they decided to opt out of motherhood… right?

The study asked them that question. One in 7 said they definitely didn’t want kids.  But the rest wanted their own children. Some have given up on that idea, I’m sure. But a quarter of them said they still planned to try.

Good luck, ladies.  The movie Working Girl had a happy ending. She got Harrison Ford and the corner office. Let’s hope each of us can have it all, too.

← Previous Post: My most humiliating infertility moment Next Post: All I want for Christmas is the truth →