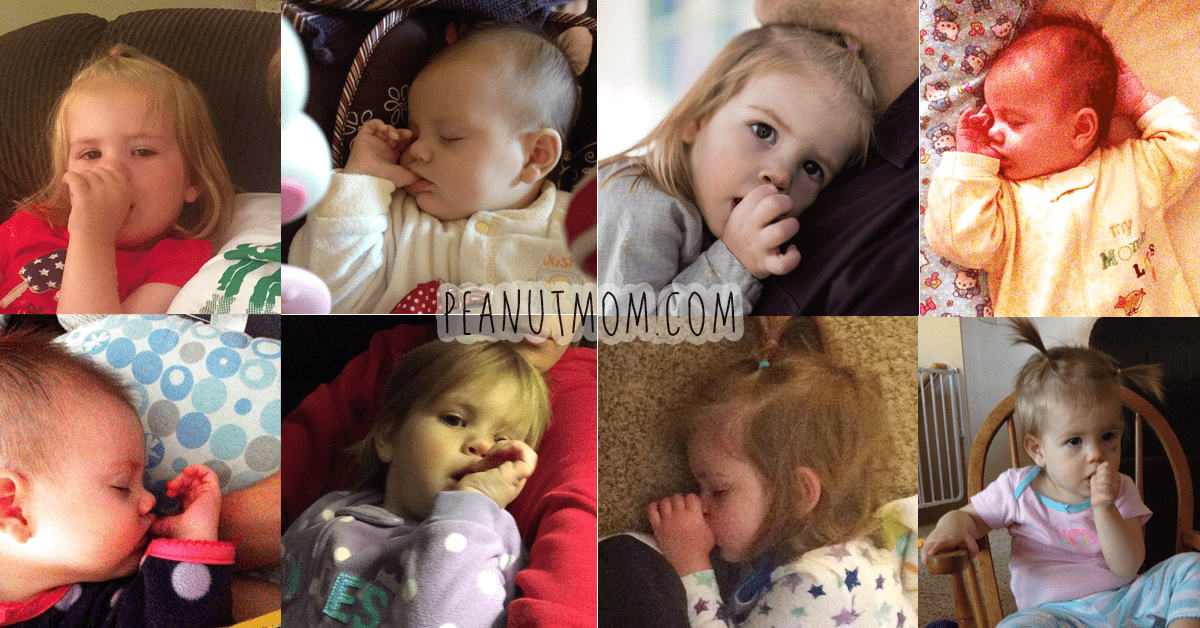 Peanut was just 3.5 months old when we snapped our first photo of her sucking her thumb. Sound asleep in her crib, head turned to the side, thumb popped in her mouth. She never wanted a pacifier again.

At daycare, they marveled at her napping skills. “She goes down so fast, just sticks her thumb in and she’s out like a light,” they told me. 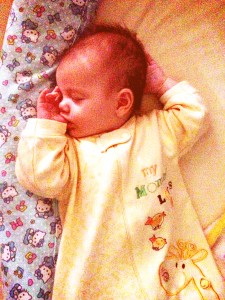 I’ve seen some mothers swat at their child’s hand when they stick their thumb in their mouth. My own father has done it to Peanut several times, which pisses me off something fierce — I’ll parent my kid, thankyouverymuch.

But the thumbsucking rarely bothered me. Because as a kid, I was a thumbsucker too. How could I fault my little girl for my own habit?

I knew someday we’d have to address it. Even if I forgot, there was no shortage of comments from people — sometimes complete strangers — to remind me. “You’re gonna have to take care of that,” one well-meaning woman said at Target.

I gave her the stinkeye. She had as much a right to comment on my child’s habits as I did to comment on her waistline. (This applies to pacifier comments, too. Trust me, that kid’s mom knows it’s not ideal. But she is the parent, and she’ll handle it in her way on her schedule. Snarky comments do not help. They just reveal that you’re an a**hole.)

It wasn’t a big deal — we’d cross the thumb sucking bridge when we got there.

“Just put some of that nasty-tasting stuff on her thumbs,” friends would suggest. Easy peasy, right?

When the time came for my parents to address my thumbsucking, that’s the route they took. I’m not certain how old I was. Three, maybe four years old. At that point in life, you form few permanent memories. But the night my parents put the nasty stuff on my thumbs is vividly etched in my memory. I remember that first taste. I remember crying. It was traumatic.

Soon afterward, my thumb taken from me, I started biting my nails. Thirty-two years later, as an adult nearing middle age, I’m still trying to kick that habit.

So you can see why I’m hesitant to use my parents’ strategy. They might have won the battle, but I lost the war. My nail biting has affected my teeth, the health of my nails, and most of all, my confidence. It’s embarrassing. Like wearing your neuroses on your sleeve. Every time I interview for a job or meet someone for the first time, I wonder what they must think of me.

Peanut had a dentist appointment last week, and we asked the dentist if she saw any signs that the thumbsucking was affecting her mouth. The dentist wasn’t worried, but said we should address it eventually. She recommended Thumb Guard or Thumb Busters, since most kids need physical reminders to kick the habit. I’d already bought Mavala Stop, a clear bitter-tasting polish, based on another mom’s recommendation.

After the dentist appointment, I explained to Peanut that the dentist said sucking her thumb would hurt her teeth. She wasn’t happy, but accepted the explanation. When we saw her pop it in, we’d remind her, “No thumb, please.” She complied, begrudgingly, but replaced it as soon as we looked away.

A few nights ago at bedtime, I was tucking Peanut into bed when her thumb crept up and into her mouth. When I asked her to remove it, she refused. “Peanut, I don’t want to put the bad-tasting stuff on your thumb,” I warned. Still, she didn’t budge.

“Do you want me to put the bad stuff on your thumb?” I asked.

To my surprise, she nodded. I was skeptical, but figured we’d give it a go. I painted a tiny dot of the clear polish on her right thumbnail, warning her not to put it in her mouth. “It will taste really yucky,” I explained. She seemed to understand. I tucked her in and left, cautiously optimistic.

My husband went downstairs to work on a project, so I was alone upstairs when her door opened 15 minutes later. “Mommy?” she whimpered. “Need ice pack.”

(Ice pack is Peanut’s cure for all things that ail her. Sore finger? Ice pack. Hurt feelings? Ice pack. We gave her an ice pack once, and created a monster.)

I rushed to her door and asked where the owie was. She showed me her tongue, as a pool of saliva rolled out and dribbled down her chin. “I eated the bad thing,” she said, her thumbs out in front of her as if they were poisonous. “Need ice pack.”

I took her to the kitchen for a sippy cup of water. She gulped it down, but kept whimpering. I used a burp rag to wipe her tongue, trying to rid her mouth of the bitter taste. It didn’t work. “Mommy, bad eat,” she whimpered.

I got her a glass of milk and a cookie, hoping that would reset her palate. She sat in her toddler chair, sipping her milk and nibbling the cookie. When she was done, without thinking, she popped her thumb in her mouth. Immediately she began to cry.

I kneeled in front of her. “Aw, sweetie, did you do it again?” She nodded, her eyes full of tears. She picked up the burp rag and stuck it in her mouth, scraping at the back of her tongue. Suddenly she gagged, and I cupped my hands in front of her mouth as she threw up into the burp rag.

I took her to the bathroom and showed her how to swish water in her mouth and spit it out. I scrubbed at the offending thumb with soap, taking a taste of her thumb myself to be sure the bitterness was gone.

Back in the living room, she pointed at the couch. “Want snuggle, Mommy,” she said quietly, her forehead on my collarbone.

“That I can do,” I reassured, my heart melting.

We snuggled until her eyes drooped, and I tucked her into bed feeling like the worst parent in the world. I did that to her. I put something on her thumb, her precious and beloved thumb, that made her throw up.

Why? Because I wanted her to stop doing something that honestly, I’m not even that worried about. Everyone else is more worried than I am.

Sucking her thumb makes her happy. Is it bad for her? Yes, eventually. But the research says it’s only a major issue once permanent teeth arrive, around age 6. We’re a long way from that point. Knowing how traumatic the experience was for me, it seems silly to do something so dramatic at this early stage.

When my husband came upstairs later, I told him what happened. “So are you going to buy those thumb things the dentist recommended?” he asked. I shook my head emphatically.

“No. I am done with thumbsucking prevention. I failed, so you can do it now,” I told him. I couldn’t bear to cause my baby girl any more strife.

I’m not sure where we go from here. I suppose we’ll buy the damn thumb cover thingers someday. I looked them up and they’re surprisingly cheap — about $13. My Google search was enlightening, because I found a website full of pictures of kids happily wearing their Thumb Busters. Not toddlers — KIDS. Six, seven, even eight years old. I think we can let Peanut’s thumbsucking go on a while longer before we get crazy.

I stumbled across the Mavala Stop bottle the next morning, and was about to throw it away until I saw something on the label. “To prevent thumb sucking and nail biting,” it read. Hmm… maybe I should use it, I thought.

I tucked it back into the medicine cabinet.

A fine pair we are.